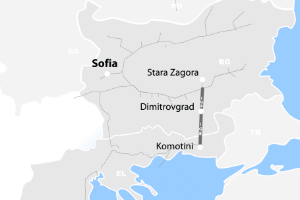 The Trans Adriatic Pipeline AG (TAP) and the Interconnector Greece-Bulgaria (ICGB) have signed an agreement laying the foundations for linking the two projects and thus bringing gas from Azerbaijan to Bulgaria, a country that depends on Russia for almost 100% of its gas imports.

According to a press release from the TAP company, the two sides will work together on realising a possible interconnection point in the vicinity of Komotini, Greece.  This will enable new gas supplies to flow into the Bulgarian gas network and further into the South Eastern Europe region.

Lutz Landwehr, commercial director of TAP is quoted as saying that his company welcomes the signature of the memorandum of understanding and sees it as an opportunity to transport Caspian gas to Bulgaria, thus enhancing diversification of supply and improving security of supply in the country and in the wider South Eastern Europe Region.

The EU executive welcomed the move. “The Commission welcomes the Memorandum of Understanding, This is a step ahead to deliver Caspian gas to South East Europe,” a spokesperson told EURACTIV.

Following the signature of the agreement, TAP and ICGB – the company in charge of a planned pipeline linking Greece to Bulgaria – will start a cooperation focused on understanding the technical requirements of each project, exchanging views on best practices and on any other relevant issues that affect the development of either project.

The Trans Adriatic pipeline (TAP) project to bring gas from the Caspian region via Turkey into Europe is gearing up to tender in 2014 ahead of its planned construction start in 2015.

According to the Bulgarian ministry of economy and energy, the ICBG includes construction of a trans-border reverse gas pipeline with a length of about 168.5 km (140 km in Bulgaria, 28.5 km in Greece), connecting the Greek gas network in the area of Komotini with the Bulgarian gas network in the area of Stara Zagora. The capacity of the gas pipeline is foreseen to be 3 up to 5 billion cubic metres a year (bcm/y), the pipe diameter being 700 mm (28").

In January 2011 a company, "ICGB" AD, was formed between "Bulgarian Energy Holding" EAD and IGI Poseidon (50% EDISON and 50% DEPA). BEH EAD and IGI Poseidon are the main shareholders, with equal shares. The joint company will construct, own and operate the infrastructure and is responsible for developing, designing, financing, construction, commissioning, operation and maintenance of the new gas interconnection ICGB.

According to Bulgarian media citing official sources, the European Commission and the European Bank for Reconstruction and Development (EBRD) are largely expected to finance ICBG, which is expected to cost some €160 million. From Greece, the pipe will pass through the cities of Kardjali, Haskovo and Dimitrovgrad, before reaching Stara Zagora, where it would linked to the country’s gas transmission system.

The construction of ICBG is expected to begin this year and the project could be completed in 2016, Bulgarian officials have said.

The ICBG is in fact an old project which initially planned to bring gas from the Revithousa LNG terminal in southern Greece to Bulgaria.

Bulgaria had put hopes on the Nabucco project, as this planned pipeline was to bring Azeri gas from Turkey through Bulgarian territory further North. The selection of the TAP project has been seen as a big disappointment in Sofia, but the TAP pipeline consortium has consistently given assurances that it could also contribute to the diversification of Bulgaria’s gas supply.

The Trans Adriatic Pipeline AG (TAP) has been selected to transport natural gas from the giant Shah Deniz II field in Azerbaijan to Europe, the rival project Nabucco having been thus shelved.

The approximately 870 km long TAP pipeline will cross Greece and Albania before reaching Italy through an offshore section. It is to be built by a consortium led by BP, Norway's Statoil and Azerbaijan's SOCAR.

The consortium plans to deliver 10 billion cubic metres of gas per year to Europe, and possibly double that in the long-term future.

0 responses to “Azeri gas to reach Bulgaria through interconnector”