By James Crisp | EURACTIV.com with AFP

High stocks are continuing to force prices down but worldwide global demand will grow by 1.4 million barrels a day to 96.1 million, the IEA said in its monthly oil market report.

European oil demand growth reached a five quarter high in the second quarter of the year.

But the IEA warned that was “unlikely to last,” given economic “precariousness” after Britain’s vote to leave the European Union, a result which “added to the uncertainty.”

Transport is oil’s biggest customer, driving two-thirds of the demand for final petroleum products in Europe.

The European Commission is planning to publish a strategy to cut emissions in the transport sector on 20 July.

It is expected to cut emissions and the EU’s dependence on oil for transport, potentially hitting future demand.

Without significant cuts to CO2 emissions from cars, vans and trucks, the bloc will fail to meet its UN climate commitments.

A new study released yesterday found that 80% of Europe’s oil imports are supplied by non-EU companies.

Rosneft and Lukoil, both Russian-owned companies, account for the highest share of crude oil imports to the EU, according to the study by Cambridge Econometrics for Transport & Environment.

Laura Buffet, oil officer at T&E, said, “Transport’s thirst for imported oil and diesel costs every citizen around €300 a year – money that flows out of the European economy.” 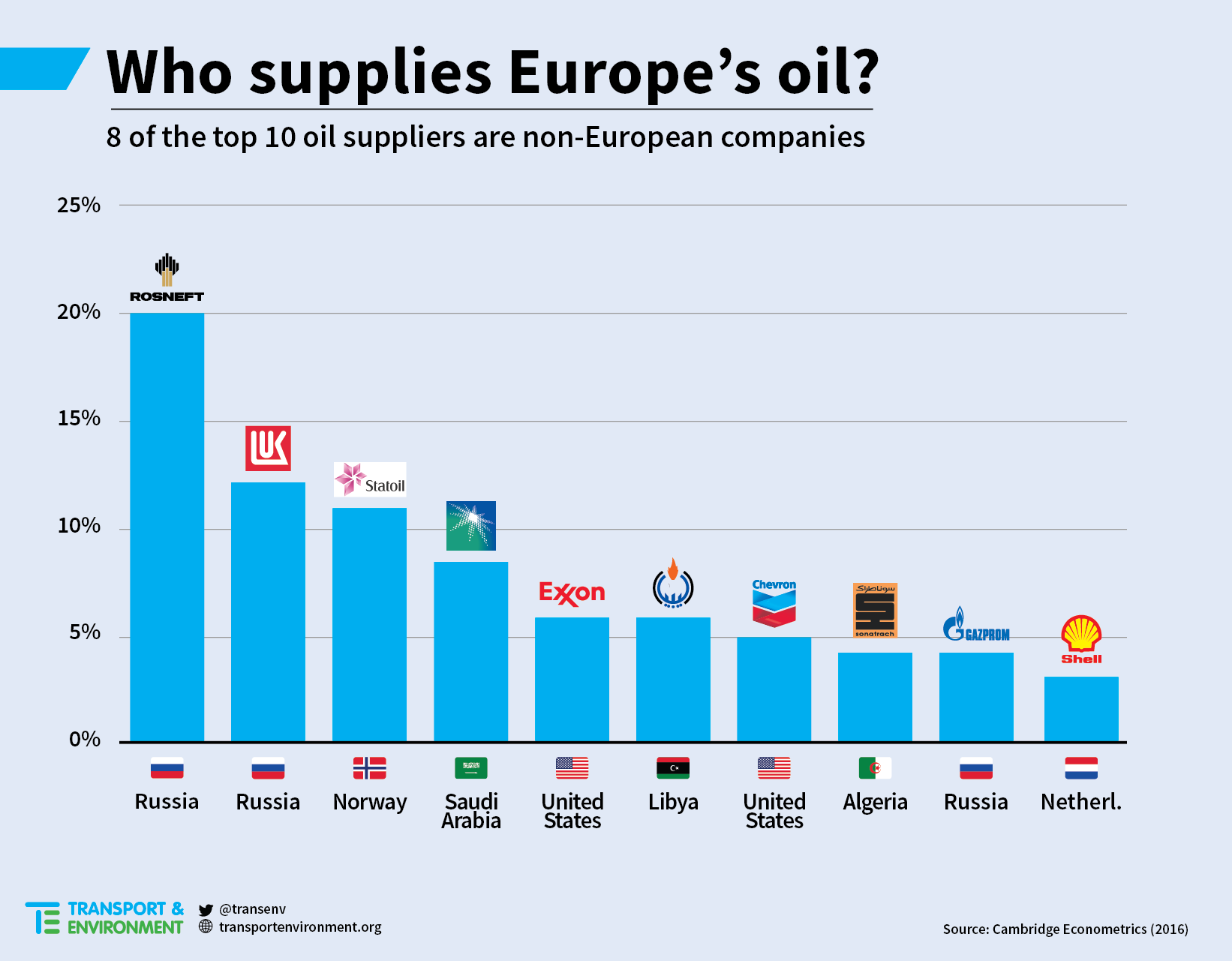 Eurozone industrial production fell back 1.2% month on month in May, reversing a revised 1.4% rise for April, separate data from Eurostat showed today.

A Capital Economics research note on the data cited the feared impact ahead of the UK’s vote to leave the European Union and the effect of higher oil prices which could force the European Central Bank to loosen monetary policy still further.

Daniel Vernazza, lead UK economist at UniCredit bank, said, “Since Brexit is expected to drag down economic activity in the eurozone mostly via the trade channel, the industrial sector is likely to shift down a gear in the next months.”

While predicting a “return to balance” in overall “big picture” market direction, the IEA said “the existence of very high oil stocks is a threat to the recent stability of oil prices.”

Last month the agency had warned significant price rises were unlikely given that “there is an enormous inventory overhang to clear.”

The IEA noted crude prices had edged off an early June peak above $52 dollars per barrel to trade in a $45-$50 range — a stark contrast to the nearly daily price falls earlier this year.

“Our underlying message that the market is heading to balance remains on track, but the modest fall back in oil prices in recent days to closer to $45/bbl is a reminder that the road ahead is far from smooth,” the IEA said.

Oil prices, which slumped below the $30 mark in January, rebounded earlier this week from two-month lows as an OPEC forecast pointed to an easing of global oversupply.

In its own July report, OPEC had forecast the global supply glut would ease this year and next, as producers outside the cartel, particularly the United States, cut production.

The 14-member cartel, which provides about one-third of the world’s crude, has squeezed competitors in recent months by keeping the taps open, saying June production rose by 264,000 bpd to an average 32.9 million barrels bpd.

OPEC predicted global demand growth would pick up in 2017 to allow the market to remove excess stocks.