“The EU, Canada and China continue to join forces to encourage global ambition in the implementation of climate action,” Cañete said.

But he noted that there are “political and technical challenges” that need to be overcome.

This is the third tripartite “ministerial on climate action” (MoCA) held in Brussels. The first was convened in 2017 shortly after Trump announced he would take the United States out of the Paris Agreement.

Under the agreement’s rules, the US can’t actually leave until November 2020, and there has been speculation that the exit may never actually take place.

The 2017 ministerial was an effort to quickly signal that other parties would not follow the US out of the Paris Agreement, as the Trump administration had expected. Key to that effort was getting China on board, because in the past Beijing had refused to take any action without Washington matching the efforts.

At that summit China clearly signalled its intention to stay in the accord, saving it from collapse. However the political difficulties that lie ahead were signalled when China was unable to back the text of a joint climate and energy statement that had been prepared for that summit.

The European Union and China will this Friday exact their revenge on US President Donald Trump after he decided to pull out of the Paris Agreement on climate change.

Since then, ambition for these ministerials has been scaled back to be a simple yearly reaffirmation of China’s commitment, meant to pressure the Trump Administration into ditching its plan to leave the Paris Agreement should the US president be re-elected next November. It has been assumed that any Democratic challenger would keep the US in the accord should they win.

This year’s ministerial included high-level representatives from businesses, industry, investors, science, advocacy and expert organisations. Though the previous two summits focused on the Paris Agreement rulebook and the UN climate negotiations, this year political focus shifted to modernising economies in a way that is compatible with the Paris Agreement goals.

It had been hoped that EU leaders would adopt a strategy to get to net zero emissions by 2050 at last month’s European Council, but the plan was vetoed by Poland, Hungary, Estonia and the Czech Republic. EU delegates grumbled that the failure to adopt the strategy has tied the hands of EU negotiators who wanted to push China and Canada into upping their emissions reduction commitments at this summit.

This will also be the case at a major climate summit taking place in New York in September. The June European Council was the last chance for the EU to adopt its 2050 strategy before that summit, where it was hoped that the net zero goal would motivate other countries to increase their emissions reduction commitments.

Nevertheless, at Friday’s ministerial in Brussels it was clear that, other than the US, all the world’s other major economies remain committed to the Paris Agreement – even if some are skittish about increasing their emissions reduction ambition to the level needed to meet the agreement’s headline goal.

That message was reaffirmed on the other side of the world at the G20 summit in Osaka, Japan, where leaders once again signed a statement backing the Paris Agreement endorsed by only the “G19” – noting the US disagreement.

The Americans had suggested that the text could just mention the need to fight climate change without mentioning the Paris Agreement, but French President Emmanuel Macron insisted it be specifically mentioned. In the end, the French won the argument. 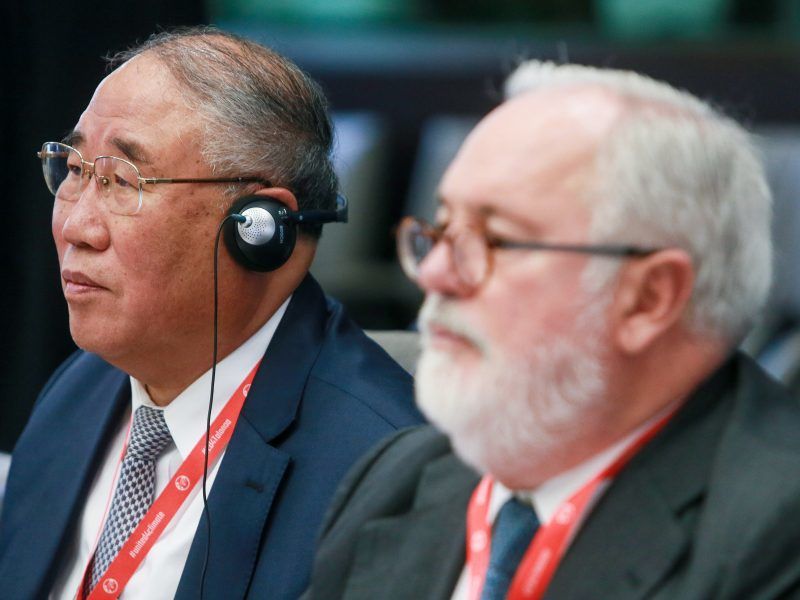 An upcoming EU-China summit in Beijing will be yet another moment for both economies to show leadership on climate action, following the United States’ surrender of influence under Donald Trump, writes Professor Zou Ji.

Canada’s Climate Change Minister Catherine McKenna said in Brussels on Friday that maintaining committed to the Paris Agreement this was the least these governments could do in order to respond to the youth demonstrations taking place across the world over the past months urging action on climate change.

“I want to speak on behalf of the youth of the world,” she said. “They’re on the streets, and they’re demanding we take action.”

The ministers will take their message to the UN climate summit in New York in September.