"The influence of some states, such as China, will grow because they have invested heavily in renewable technologies," the study says. [Shutterstock]

“The global energy transformation driven by renewables will have significant geopolitical implications,” argues the report, presented today in Abu Dhabi.

“It will reshape relations between states and lead to fundamental structural changes in economies and society,” it argues.

The study, led by the former President of Iceland, Ólafur Ragnar Grímsson, was presented in Abu Dhabi by the Global Commission on the Geopolitics of Energy Transformation, an independent initiative launched one year ago under the auspices of the International Renewable Energy Agency (IRENA).

It’s the first time that an international study explores the geopolitical implications of the global transition to renewable energy.

Fossil fuel exporting countries like Russia and Arab nations in the Middle East will be “strongly challenged” by the transition while others like China will be the “absolute winner, if not world leader,” said Grímsson as he presented the report in Abu Dhabi.

It is a sign of the global energy transformation that China takes on the Presidency of @IRENA. More about #renewables giving #China a new #Geopolitical advantage in the Commission’s Report to be introduced in a few hours. https://t.co/UFwP1qgHfH

“The influence of some states, such as China, will grow because they have invested heavily in renewable technologies and built up their capacity to take advantage of the opportunities they create,” the report says.

“By contrast, states that rely heavily on fossil fuel exports and do not adapt to the energy transition will face risks and lose influence,” it adds.

China accounted for more than half of the world’s newly installed solar capacity in 2017, according to the United Nations Environment Programme (UNEP). The Asian country announced it will start building pilot wind and solar power projects without government funding as Beijing pushes to rein in subsidy bills, Bloomberg reported on 10 January.

“China’s concerted efforts to research, develop and invest in renewable energy and clean transport offer its industry the opportunity to overtake US and European companies,” the study says.

Europe and Japan stand among the likely winners as well, as both are very dependent on fossil fuel imports and hold strong positions in renewable technologies.

“In Europe, Germany leads the way with almost 31,000 renewable energy patents,” the study notes, saying the Energiewende, or ‘energy transition’, has made the country a frontrunner in renewable energy deployment.

For the most part, the changes brought by the global energy transformation will be positive, bringing new economic benefits and opportunities as countries cut their reliance on imported fossil fuels.

In particular, “the supply of energy will no longer be the domain of a small number of states, since the majority of countries will have the potential to achieve energy independence, enhancing their development and security as a result,” the report says. 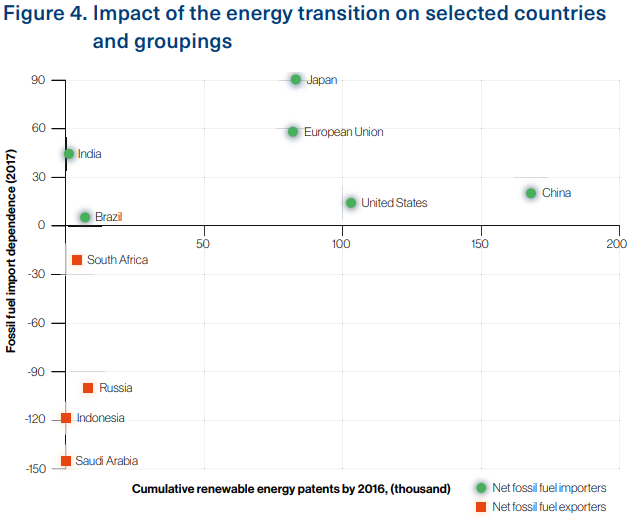 Aside from greater energy independence and prosperity, other benefits include improved food and water security, with some countries leapfrogging fossil fuels-based technologies to adopt renewables like solar and wind.

Overall, “the number of energy-related conflicts is likely to fall,” the report predicts.

But the transition will also bring new challenges. Fossil fuel-exporting countries, especially those in the Middle East, may face instability if they do not reinvent themselves for a new energy age, the report warns.

And the rapid shift away from fossil fuels could create a financial shock with significant consequences for the global economy, the study adds, echoing warnings made last year by the European Central Bank (ECB).

The transition will also destroy jobs in old fossil fuel industries like coal and disrupt established industries like automotive. And new risks may emerge, like cybersecurity challenges brought by the growing digitalisation and expansion of the electricity grid.

The transition will also create new dependency on certain minerals necessary to manufacture new products like batteries for electric cars or solar panels.

But despite those difficulties, the report is firmly positive about the transition: “The energy transformation will ultimately move the world in the right direction by addressing climate change, combating pollution, and promoting prosperity and sustainable development.”