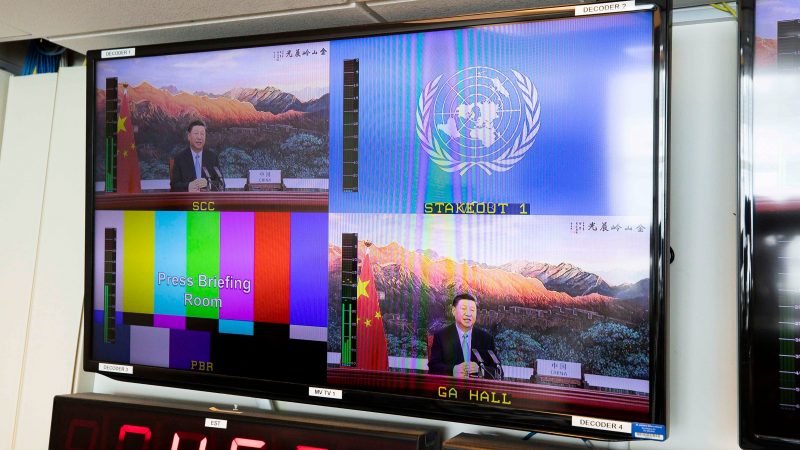 Chinese President Xi Jinping is seen remotely addressing via video the General Debate of the 75th session of the General Assembly of the United Nations on a screen in the international news office area at United Nations headquarters in New York, New York, USA, 22 September 2020. [EPA-EFE/JUSTIN LANE]

In a surprise announcement to the UN general assembly on Tuesday, President Xi Jinping said China would adopt “more vigorous policies and measures” to increase its climate goal and peak carbon dioxide emissions before 2030.

In recent months China, the world’s largest emitter, has signalled an intent to strengthen its climate commitments. This is the first time President Xi has spoken of cutting emissions to net zero. It raises the bar for other large emerging economies such as India, where the discussion of achieving carbon neutrality is in its infancy.

“The Paris Agreement on climate change charts the course for the world to transition to green and low-carbon development. It outlines the minimum steps to be taken to protect the Earth, our shared homeland, and all countries must take decisive steps to honour this agreement,” President Xi said in a recorded video message.

He called on all countries to “seize the historic opportunity” of scientific and technological innovation and recover green from the the coronavirus pandemic. 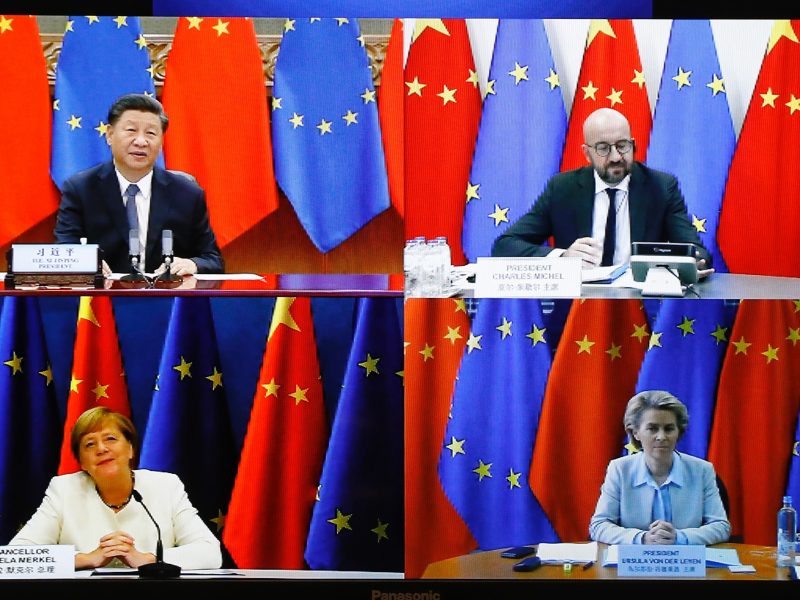 Reactions range from enthusiasm to scepticism

Ursula von der Leyen, the president of the European Commission, welcomed China’s announcement as “an important step in our global fight against climate change” but also cautioned in a message on Twitter that “a lot of work remains to be done”.

Todd Stern, former US climate envoy and architect of the Paris Agreement, said the carbon neutrality pledge was “big and important news”.

“Simply peaking emissions ‘before 2030’ won’t be enough to put China on the rapid path needed for carbon neutrality, but overall this is a very encouraging step,” Stern added.

Xi’s speech followed Donald Trump’s statement to the UN, in which he lashed out at “rampant pollution” by China. The US president has withdrawn from the Paris Agreement and reversed many of the climate policies put in place by predecessor Barack Obama.

Joe Biden, the Democratic contender for US president, has said he will bring in a 2050 net zero emissions target if elected in November. His manifesto includes tough rhetoric on China, saying he would put pressure on the country to stop financing dirty energy in other countries.

“Xi Jinping’s climate pledge is a bold diplomatic move that demonstrates clear political will and the maximum desire to contrast China’s climate stance with the US,” Li Shuo, Beijing-based senior energy and climate officer at Greenpeace, told Climate Home News.

John Murton, the UK’s climate ambassador for UN climate talks in Glasgow next year, or COP26, tweeted that it was “a significant announcement” and he was looking forward to learning about the details.

Jennifer Tollman, a policy advisor and climate diplomacy expert at think tank E3G, added the move marked “a huge economic shift” as both China and the European Union – the world’s two largest markets – promised to end their contributions to climate change.

The announcement will be also seen as a win for the EU, which has aimed to leverage more action from China in bilateral talks.

It comes ahead of a high-level dialogue between the EU and China mooted for November on their long-term decarbonisation strategies and how they will enhance their climate plan to 2030.

“If this is what China is putting on the table now, where will we end up?” Tollman asked. One detail to clarify is whether China’s net zero goal applies only to carbon dioxide or to all greenhouse gases, she said.

Under its current commitment to the Paris Agreement, China has already promised to peak its carbon emissions “around 2030”.

“Making it ‘before’ 2030 is not enough,” Li said in a tweet. “But at this stage shows positive political willingness. Key next step is to answer by how much before,” he added.

In bilateral discussions between the EU and China, Brussels had been pushing for Beijing to peak its emissions by 2025, arguing 2030 was “far too late”.

The move comes ahead of China’s 14th five-year plan, which will include detailed development targets from 2021 to 2025. Sources told Bloomberg that China plans to reduce the share of coal in its energy mix from 57.5% in 2020 to 52% in 2025. On the same date, it plans to get 20% of primary energy from non fossil fuels sources.

That would translate to 42% of China’s grid being powered by renewable and nuclear energy by 2025, according to Bloomberg analysis – up from 32% today.

Richard Black, director of the UK-based Energy and Climate Intelligence Unit, welcomed the move as a “very significant step forward”.

“China isn’t just the world’s biggest emitter but the biggest energy financier and biggest market, so its decisions play a major role in shaping how the rest of the world progresses with its transition away from the fossil fuels that cause climate change.”

Note: This article originally appeared on Climate Home News and is reproduced here by kind permission.