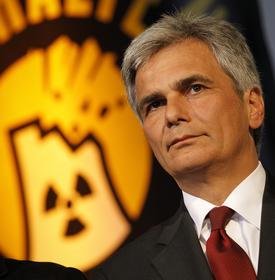 The Chancellor of Austria, Social Democrat Werner Faymann, joined anti-nuclear activists on Monday (25 April) to call for a public campaign to eliminate nuclear power in the European Union. His aides now say the Chancellor hopes to mobilise public opinion to prompt the launch of a European Citizens' Initiative.

"The nuclear power lobby has more money than we do, it has more financial resources than we do, but we want to create a humane future without nuclear energy in Europe!," Faymann reportedly said, speaking at an anti-nuclear protest in Vienna.

The development comes amid large worldwide protests marking the 25th anniversary of the Chernobyl disaster. These included some 120,000 protesters across Germany and a so-called "die-in" in Strasbourg on the Franco-German border.

The chancellor's spokesperson, Leopold Szemeliker, told EURACTIV that the aim was to mobilise public opinion in Europe against nuclear energy, which could "lead in the direction of a citizens' initiative".

The European Citizens' Initiative allows EU citizens to propose legislation if one million signatures are collected, and the mechanism will be valid from 1 April 2012.

Szemeliker was confident that such an initiative on nuclear energy would be legally valid, a necessity if it is to be recognised by the European Commission, saying "we're working on that, we're quite sure that we will find a possibility".

Szemeliker said the initiative would be a significant "political instrument" in showing that "a majority of people all over Europe have a different opinion from that of the majority of governments".

A special Eurobarometer poll on nuclear safety published in February 2007 – long before the Fukushima disaster – revealed that a majority 53% of Europeans believe "the risks of nuclear power outweigh its advantages".

The EU has limited competency in determining the energy policies of member states and so persuasion, rather than a central decision, will be key to anti-nuclear campaigners' success.

Szemeliker added that the German Social Democrats would join them in the effort and they also plan to work with environmental NGOs as well as convinced anti-nuclear political parties across Europe.

Fabian Zuleeg, a senior analyst at the prominent think-tank the European Policy Centre, argued that moving away from nuclear towards renewable energy sources would pose significant challenges to the EU.

"If we want to use renewables to that extent, we will need a much more integrated energy grid," he said, adding that energy policy could not remain a purely national issue, as many nuclear power stations are located near national boundaries.

Environmental groups have expressed satisfaction with the Austrian move, as well as the general turn against nuclear energy in Europe.

Patricia Lorenz, an anti-nuclear campaigner with Friends of the Earth, suggested anti-nuclear governments should raise the question of the abolition of the European Atomic Energy Community (Euratom).

She noted that any Citizens' Initiative had to be carefully formulated to be legally valid and called for an intergovernmental conference to abolish Euratom. "Now that there's no majority for nuclear anymore it can be discussed, I think it's high time to do so," she said.

She argued Euratom currently served "no purpose" but that pro-nuclear countries, notably France and Finland, clung to the organisation for symbolic reasons. "It's more that they fear the signal: 'The nuclear age is over'. Well it is a bit over!" she said.

Any change to European nuclear policy needing a treaty seems unlikely, however. Last September, responding to questions on financial and monetary reform, Faymann himself said that "all measures that would require treaty change I find – thinking back to the Lisbon Treaty – hard to imagine in the next two years".

Nuclear power accounts for just under a fifth of electricity generation in the EU, but over 75% in France. France is second only to the United States in terms of nuclear power generation.

The recent Fukushima disaster in Japan and the 25th anniversary of the Chernobyl disaster in Ukraine have reinvigorated the global anti-nuclear movement and raised questions regarding the safety of nuclear energy. Italy recently decided not to resume nuclear energy production and Germany has accelerated the phasing out of its nuclear reactors.

Advocates of nuclear energy – which include prominent environmental activists such as Briton George Monbiot – argue the risks are manageable, and that it can provide significant benefits for Europe's energy independence and reduce carbon emissions.

The EU institutions have been staunchly pro-nuclear since the signing of the treaty establishing the European Atomic Energy Community (Euratom) in 1957. Euratom remains legally separate from the European Union, and the European Parliament has little say on its operations.

The treaty – to which all EU member states are party – commits its signatories to "create the conditions necessary for the development of a powerful nuclear industry," which represents an "essential resource for the development and invigoration of industry and will permit the advancement of the cause of peace".

The EU institutions are currently financing nuclear projects in Romania and Bulgaria, as well as the experimental fusion reactor ITER in the south of France. The latter has faced criticism from MEPs for its mounting cost overruns.