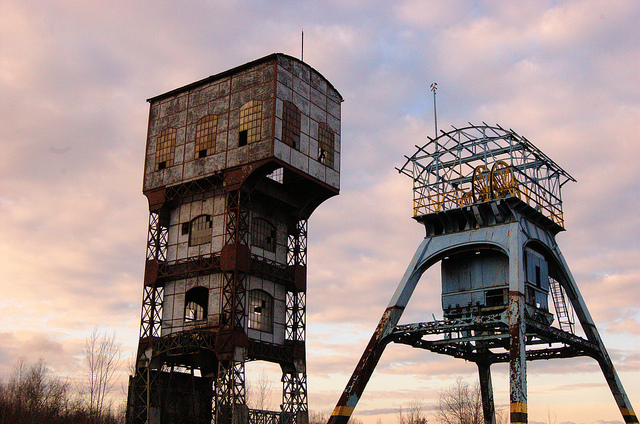 Mining towers at the closed Polska mine in Poland. [Kris Duda/Flickr]

Global growth in coal demand ground to a halt last year for the first time in two decades, but India and Southeast Asian countries are keeping the dirty power burning despite calls to switch to cleaner energy, the IEA said on Friday (18 December)

The share of coal is seen dropping in the energy mix of China, as demand levels off amid slower economic growth there, the International Energy Agency said in a report.

Renewable energy sources hydro, wind and solar power may be playing an increasing role in sating global demand while coal capacity ages and shrinks, but India and the Association of Southeast Asian Nations (ASEAN) are “remaining centres of significant coal growth,” the report said.

Those centres saw demand increasing by 112 million tonnes in 2014 – which compares with a falloff in coal demand in the highly-developed OECD area of 47 million tonnes.

Oil rarely competes with coal, but gas, whose price is linked to oil, has emerged as an alternative to coal amid falling crude prices, and gaining market share in some countries, including the United Kingdom, the report noted.

Coal was the bedrock on which Britain’s Industrial Revolution was built but the country’s last mine, at Kellingley in Yorkshire, will close on Friday ending an era for power generation.

Coal’s share of power generation in Britain remains at 20.5% – imports will fill the gap – albeit down from 28.2% in 2014, according to the latest UK government data.

The new government in Poland, where 90% of electricity is coal-generated, said last month it will remain attached to coal even as EU partners try to phase it out owing to its role in producing carbon emissions.

“The COP21 agreement sent a strong signal to the governments around the world to continue phasing-out of fossil fuels. While EU coal is already in decline the EU coal power carbon emissions needs to be cut three times faster than currently planned, in order to avoid the worst impacts of climate change” (3), said Darek Urbaniak , Energy Policy Officer WWF European Policy Office.

EURACTIV exclusively revealed on Tuesday the extent of the coal lobby’s anxiety about the COP21 deal. Euracoal secretary general Brian Ricketts, who contributed to the IEA report, said it would mean the industry being hated like “slave traders”.

>>Read: Coal lobby chief: COP21 means ‘we will be hated like slave traders’

Lowering its world demand forecast by over 500 million tonnes of coal-equivalent (Mtce), the IEA said that “the golden age of coal in China seems to be over”.

It added that while China’s share of coal in its energy output would slide from 29% percent to 27% by 2020, India alone would account for half of global demand growth with ASEAN states accounting for half the remainder.

But there is scant evidence the relative Chinese falloff in coal usage will result from any commitment to cleaner energy use in the wake of the Paris conference on climate change.

Rather, the coal slide looks largely a consequence of weaker output projections for energy intensive sectors such as steel and cement.

The report added Beijing had little scope to slash coal’s share “given that gas and oil power generation is very limited in China,” which uses half of global coal.

It did, however, highlight China’s attempts “to diversify away from coal to achieve a more energy-efficient economy and to address local pollution.”

Noting increasing US gas production, the report forecast that the decline in US coal demand is inevitable to below 35% of energy production by 2020 as renewables and shale gas move towards centre stage.

But despite reports of its pending demise in a world looking to become progressively greener, coal in 2013 still accounted for approximately two fifths of global electricity needs. Its 29% percent share of total world energy supply made it second only to oil’s 31%.

Citigroup said, “We suspect that thermal coal is in structural decline, despite the coal industry’s current focus on HELE (high efficiency low emissions) and USC (ultra super critical) technologies. […] We are dubious about the prospects for CCS, and have yet to be convinced that Australian thermal coal will be the solution to India’s energy challenges, rather than some combination of domestic coal and renewables."

Tim Buckley, IEEFA’s director of Energy Finance Studies, Australasia, said, “The global traded coal industry is in dire straits. Indian coal imports have halved in the month of November 2015, exactly as forecast by the Indian Energy Minister Piyush Goyal in November 2014. Coal imports into China are down 30% year on year in 2015. The collapse in the two largest coal import markets over 2015 clearly explains why coal company share prices and the traded price of coal have both continued to decline and the forward market suggests this trend will continue through to at least 2021.”

Imke Lübbeke, head of Climate and Energy, WWF European Policy Office said, “Instead of funding unproven technologies such as Carbon Capture and Storage (CCS) and High-Efficiency, Low-Emissions (HELE) coal technologies WWF urges the EU to give a preferential support for renewable energy and energy efficiency.”

Luke Sussams, senior researcher at the Carbon Tracker Initiative, said, "The recognition that the era of strong growth for coal is over reflects a marked change in outlook from the IEA that should set alarm bells ringing even more loudly for investors already burnt by the sector’s demise.

“Over the last year, Carbon Tracker has been warning demand for coal, in particular thermal coal for power, looks set to peak and that stockholdings in the sector make neither financial or climate-sense in an increasingly carbon-constrained world.

“The historic climate deal signed in Paris limiting climate change to 2C, with an ‘ambition’ for an even tougher 1.5C target, is effectively a death sentence for coal. Carbon Tracker’s recent ‘Danger-Zone’ report found that no new coal mines are needed in a 2C world. The IEA’s stark reassessment appears to confirm this inescapable trend.”