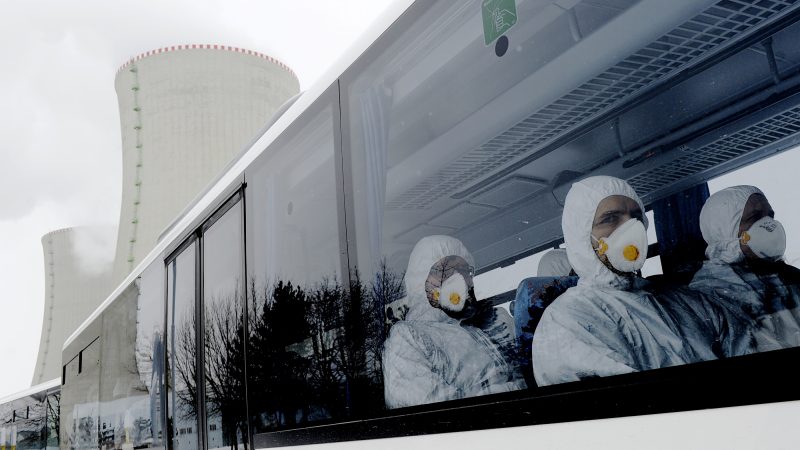 File photo. Workers wearing protection suits and masks are evacuated in a bus from the compound of the plant during an emergency exercise in the nuclear power station Dukovany, near Trebic, Czech Republic, 26 March 2013. [Filip Singer/EPA/EFE]

The Czech state has long been in talks with ČEZ, in which it owns a 70% stake, about expanding its nuclear power fleet to replace blocks that will expire in the coming decades as well as lignite power plants to be retired in the 2030s as Europe weans itself off coal.

Costs and financing have been major sticking points in light of delays and cost overruns at other projects, Germany’s decision to abandon nuclear energy and ČEZ’s unwillingness to take on risks of a project favoured by politicians that may never pay for itself.

The government wants to propose a financing model by the end of May, before the state goes into talks with the European Commission over the project.

It has been pushing for nuclear to be seen as a green or low-emission source under European Union rules, which Industry Minister Karel Havlíček said would help reduce funding costs.

Under the approved framework contracts, which Havlíček wants to close with ČEZ by the end of June, ČEZ could sell the project to the state at various points.

A third contract still being prepared would lay out conditions under which the state could buy electricity from ČEZ and take the power price risk off the company.

Havlíček said the price would be determined according to “justified costs and reasonable profit” for ČEZ.

He said the scheme being discussed was an “off-take contract”. The state would buy the power at a pre-agreed price and then sell it at the power exchange at a profit or loss, he said.

The government has estimated a new 1,200 megawatt (MW) block, set to be built at ČEZ’s Dukovany nuclear power plant and enough to cover a tenth of annual consumption, would cost 140-160 billion Czech crowns (€5.1-€5.9 billion).

Critics, including some ČEZ minority shareholders, argue it will run much higher.

He said the price would come below that for Hinkley Point in Britain, which was set at 92.5 pounds (per megawatt-hour in 2012 prices) in a contract for difference.

Russia’s Rosatom has been favoured as a supplier by some, including Czech President Milos Zeman, although the country’s security establishment has been against suppliers from Russia and China. Other potential builders are South Korea’s KHNP, France’s EDF and US group Westinghouse.