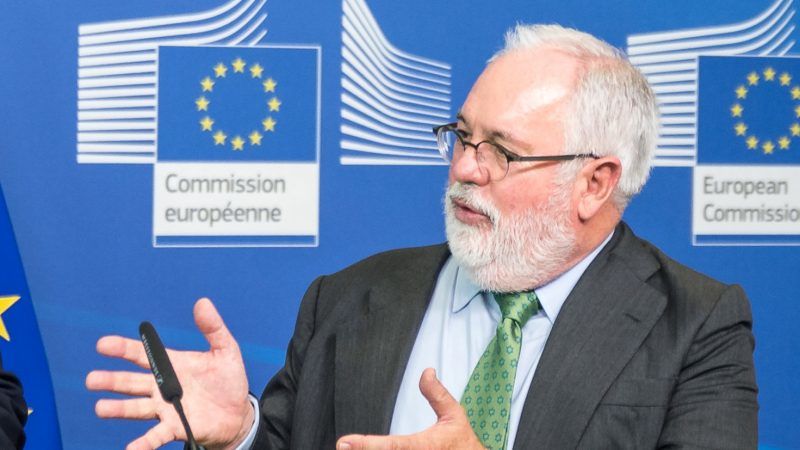 Following the successful adoption of two tentpole energy savings laws this year, the focus has switched from negotiation to implementation, as national capitals are now expected to start planning for the future.

At a high-level dinner debate in the European Parliament on Wednesday (26 September), the architects of the new efficiency rules, EU climate Commissioner Miguel Arias Cañete and MEP Bendt Bendtsen (EPP) were adamant that the hard work starts now.

“I trust that the Commission will enforce these long-term strategies for many years to come,” said Bendtsen, a Danish lawmaker who helmed the revision of the energy performance of buildings directive (EPBD) and hosted the event.

Under the EPBD, EU governments will have to draft long-term renovation strategies and take into account factors like health and indoor air quality in new builds. One of the main aims of the legislation is to increase Europe’s measly 2% building renovation rate.

Cañete acknowledged that “the implementation of the Paris Agreement needs the decarbonisation of our building stock” and revealed that he always stresses “energy efficiency first” when meeting with with national and regional representatives.

The Spanish Commissioner also urged them “to use the full tools available” under the multi-billion Investment Plan for Europe, adding that the EU executive will “take into account all social benefits” when giving member states implementation guidance notes.

Help won’t be limited just to public bodies either: the European Alliance of Companies for Energy Efficiency in Buildings (EuroACE) is working on a first-of-its-kind guidance document for national administrations and industry stakeholders.

Peter Bang, the chief financial officer of Danish company Velux, the event’s organiser, urged those doing the implementing of the new laws to “focus on what triggers consumers” spending.

“Energy savings aren’t the main priority” for consumers, Bang said. But “things like comfort are.”

The targets agreed this year are for 2030 but Europe still has a lot of work to do to meet the 2020 energy efficiency benchmark. Energy powerhouse Germany is one of the most notable examples of member states that have admitted they will not meet it.

Paul Hodson of the Commission’s energy directorate, acknowledged that it is “ridiculous” that the EU executive is still embroiled in implementation infringement procedures but said that work is in progress to streamline the process.

“The last target was tough, the new one is tougher. It needs an effort to meet it so this isn’t about finger-pointing. We’ll keep the big stick of infringements for when they are needed,” the Commission official said.

Hodson added that his services will “go to member states, accompany member states and launch infringements if necessary. Hopefully fewer than last time.”

One of the regional representatives that will relish the Commission’s help is Youssouf Bady, an adviser to Brussels region energy minister, Céline Fremault.

Bady explained that federal governments like the Brussels region have to do the same reporting as national institutions, which is a “big challenge” and “needs implementation support, not just financial support”.

Brussels has a mountain to climb in terms of its building stock, 90% of which are over 40 years old. Over 90% of the region’s buildings are residential and 60% are rented, meaning the issue of split incentives poses an obstacle to renovation.

Split incentives arise when landlords believe renovations are not worth the investment as they won’t be the ones to reap the benefits, while tenants refuse to fork out due to the short-term nature of their contracts.