Energy Union will be built on public guarantees for private investment, says Cañete 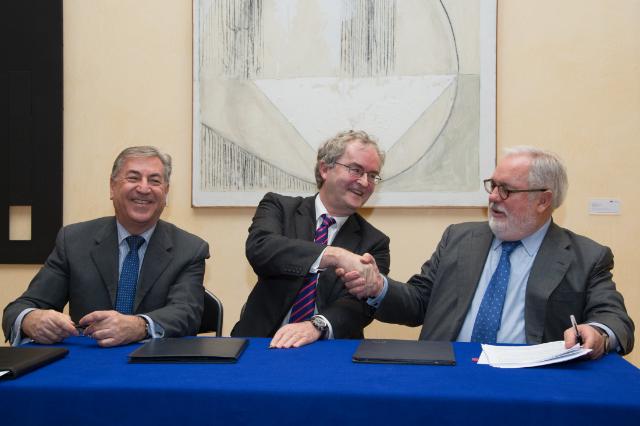 Commissioner Vella, Jonathan Taylor of the EIB and Commissioner Cañete at the launch of the new investment tools. [European Commission]

Such “blended” mechanisms are central to the EU’s flagship Investment Plan. It aims to raise €315 billion by staking €21 billion of public money from the European Commission and European Investment Bank (EIB) in risk guarantees.

Cañete confirmed a similar approach would be used to encourage private investment across the five pillars of the planned Energy Union – energy security, renewables, energy efficiency, internal energy market, and research and innovation.

He was speaking yesterday (16 February) at the launch of two financial instruments based on the same idea of leveraging private backing. The support brings in about €200 million in long-term low-cost loans, technical support, and credit risk protection for banks.Those banks will act as intermediaries, providing credit to entrepreneurs, companies, and local municipalities to invest in energy efficiency and conserving biodiversity.

The instruments would act as a “pilot” for both the Investment Plan and Energy Union, and their success would bolster confidence in the tactic, Cañete said.

“This is a contribution to protecting the climate, saving energy for our citizens and making Europe less dependent on imported energy. This is what building an Energy Union is all about,” he told reporters.

Both the new instruments and the Investment Plan give the EIB a pivotal role in offsetting risk. Observers have noted this will require a cultural shift in an institution which has been criticised for being too risk-averse in the past.

The European Commission is scheduled to publish a communication on the Energy Union on 25 February. Although it includes an action plan, it will not specify the use of blended mechanisms.

It is instead a broader memo, signaling the goals of the project, rather than going into that level of detail into how they will be hit, according to a draft document seen by EURACTIV.

The document also cites new legislation, among other methods, as important for the creation of Energy Union, a plan given political impetus by the EU’s dependence on Russian gas.

Cañete’s comments, made at a press conference with Environment Commissioner Karmenu Vella and EIB Vice President Jonathan Taylor, give a strong hint to the executive’s future thinking.

Using public finance to minimise investment risk and so unlock private finance now seem certain to be central to the two flagship projects of the new Juncker administration – the Investment Plan and Energy Union.

Encouraging private investors to back European businesses has been difficult since the financial crisis. Banks have been reluctant to risk capital, because of a lack of confidence and the need to hold more capital against risk caused by regulation imposed to shore up the banking system.

Money where it matters: today we launch new lines of financial support for #energyefficiency and #climate protection http://t.co/rk5SkZWnVz

The two new instruments, the Private Finance for Energy Efficiency and Natural Capital Financing Facility, combine EIB loans with financing under the EU LIFE Programme for Environment and Climate Action.

On the efficiency scheme, the Commission and EIB has earmarked €80 million for credit risk protection of efficiency loan portfolios and expert support.

It expects that money to leverage eight times that amount in private investment. At least €500 million of dedicated, specialist investment would be unlocked, the Commission said.

Businesses and municipalities could apply for energy efficiency finance worth from €40,000 to €5 million. The guarantees will enable local banks to support the roll out of national efficiency plans.

No more than one bank will be selected in any country and there will be an overall limit of 10 to 15 financial intermediaries. 12 banks have been earmarked.The EIB would not say which banks had been selected, citing commercial confidentiality.

Priority will be given to proposals where energy efficiency investment needs are the greatest and where there is a lack of available finance for energy efficiency, the EIB said in a press release.

Due diligence processes would prevent companies with poor environmental performances from benefiting from the programme, said the EIB’s Taylor.

Asked why the leverage was different to the 15x predicted by the Investment Plan, the Commission said that the ratio differs from project to project.

The Natural Capital Financing Facility foresees a total budget of €100–125 million for 2014-2017, paid for by the EIB and Commission.

It aims to demonstrate the potential for long-term private and sector investment in projects currently seen as not viable.

It will try to spur investment in areas such as flood protection, rainwater recycling, programs to protect forests and reduce water and soil pollution, biodiversity offsets, and eco-tourism.

It will start with a three to four year pilot phase, and is expected to finance nine to 12 operations. It will also be supported by a dedicated €10 million technical assistance programme.

The new funding will help businesses to protect nature and adapt to climate change, said Vella.

“These blended funds can help biodiversity blossom and truly become an engine for growth,” the Commissioner for Environment, Maritime Affairs and Fisheries added.

Watch a video explanation of the Investment Plan below.

The Energy Union is part of the political response to the threat to EU gas supplies.

The majority of Russian gas imports to the EU, about 30% of its annual needs, goes through Ukraine. In 2009, Russia turned off the taps, causing shortages in the EU.

One response to “Energy Union will be built on public guarantees for private investment, says Cañete”