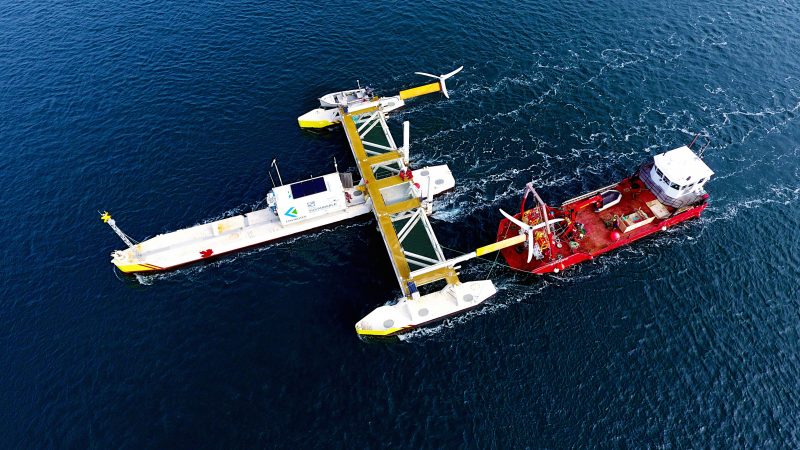 Tidal is today considered to be the closest to commercialisation while most wave energy technologies are still at the R&D stage. [Ocean Energy Europe]

The EU executive’s ambitions on ocean energies – mainly wave and tidal – are laid out in a draft EU strategy on offshore renewables, due to be published on Thursday (19 November).

“Ocean energy technologies are expected to make a significant contribution to Europe’s energy system and industry as from 2030,” the Commission says in its draft strategy, seen by EURACTIV.

Tides and waves are more predictable than wind and sunshine. As such, ocean energies are seen as “playing a crucial role in the decarbonisation of EU islands” and in stabilising the electricity grid, which is coming under growing strain from rising shares of variable wind and solar power.

However, no ocean energy technology has prevailed at the moment, the EU executive notes, saying “significant cost reduction is needed for tidal and wave energy technologies to exploit their potential in the energy mix.”

That does not mean the Commission has no ambitions for wave and tidal.

The objective, laid out in the draft strategy, is to reach installed capacities of 60 gigawatts (GW) for offshore wind and 1-3 GW for ocean energy by 2030, paving the way for a bigger increase to 300 and 60 GW, respectively, by 2050.

Aiming for 60 GW of ocean energy by 2050 “means a massive change of scale for the sector in less than 30 years, at a speed that has no equivalent in any other energy technologies in the past,” the Commission admits.

Altogether, offshore renewable capacity should be multiplied 25 times over by 2050 to reach the bloc’s climate neutrality goal. That translates into an investment estimated at up to €789 billion, the Commission points out, describing this is as “a very challenging horizon”.

The Commission’s fresh push for wave and tidal is justified by a massive planned increase in renewable energies that policymakers say will be needed in order to reach the EU’s long-term climate goals.

By 2030, up to 40% of the EU’s energy – and 80% of electricity – should come from renewables in order to meet the EU’s updated climate goals, according to the EU executive, which says “all renewable technologies must expand their contribution”.

Tidal is today considered to be the closest to commercialisation while most wave energy technologies are still at the R&D stage. Currently, there are 13 MW of wave and tidal devices being tested in EU waters, and those will continue to have priority access to the grid, according to the draft document.

Total R&D expenditure on wave and tidal energy amounted to €3.84 billion in Europe between 2007 and 2019, with the majority (€2.74 billion) coming from private sources.

That effort is likely to be maintained in the coming decade. “Dedicated support will continue to play a role for less mature offshore renewable technologies, such as tidal, wave and floating offshore wind and solar in order to move from the pilot and demonstration phase,” the Commission says in the draft policy document.

“Europe is the global renewable offshore technology and industrial leader and should fully exploit this first-mover advantage,” the Commission argues.

The 10 demonstration projects were welcomed as “a great idea” by the industry, which says they can act as “a European ‘flagship’ initiative” to coordinate national governments, regional authorities, industry and private investors behind one clear goal.

However, the investment programmes for the 10 projects are not expected to be finalised before 2025, “a missed opportunity” according to Ocean Energy Europe, an industry lobby group.

“Better to start gradually building up these 10 Investment Programmes now – so the leading tech developers can maintain their global competitive advantage,” Cagney said. “Even mature renewable projects can take several years to be deployed – so it is important to start the process as soon as possible,” he told EURACTIV in emailed comments.

One of the big challenges, according to the industry, will be to coordinate various levels of governments and industry to make the 10 demonstration projects a success.

“National ministers have shown that they are currently very motivated by the subject – locking that interest in with the right reporting arrangements means that it will be much easier to make big decisions down the line,” he added.