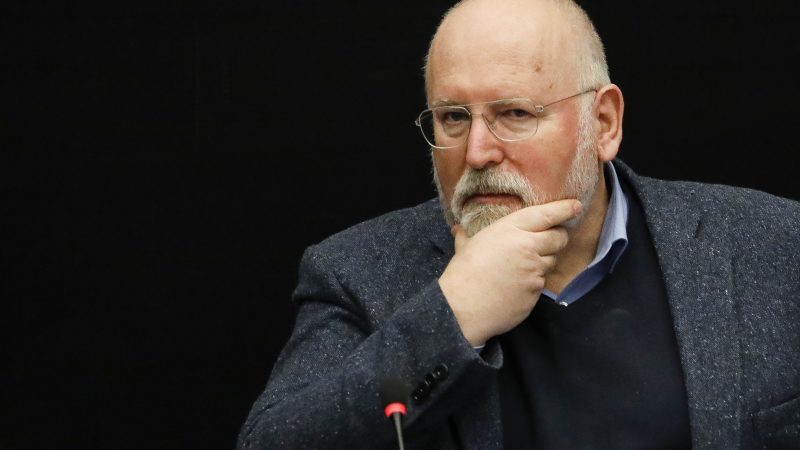 The European Union needs to decarbonise its industry rapidly if it wants to achieve its climate ambitions, but while a lot of the focus is on electrification, this will not be possible for all sectors.

That is where hydrogen comes in, providing an alternative for fossil fuel-reliant European industries like chemicals and cement. However, Europe simply lacks the space and sunshine to produce “green” hydrogen from renewable energy in sufficient quantities.

Because of that, Africa is set to play as big a role in the EU’s hydrogen import ambitions.

“Let’s face it, we want you to be leaders in green hydrogen production,” Frans Timmermans, the European Commission’s climate chief, told attendees of the seventh EU-Africa Business Forum on Monday (14 February).

“A prosperous Europe without implementing the Sustainable Development Goals in Africa is impossible,” said Timmermans, speaking as part of the EU-African Union summit. “We are sister continents and our future is interlinked,” he added.

Climate campaigners are generally positive about Africa’s potential as a hydrogen exporting region. “A shift away from fossil fuels can put EU-Africa relations on a new footing,” according to Eleonora Moro, a hydrogen specialist at the climate think tank E3G.

‘One of the world’s best renewable energy potentials’

The future Timmermans promises for Africa is one of green power. The continent has “one of the world’s best renewable energy potentials” combined with comparatively low energy consumption, he said.

Timmermans aims for the continent to triple profits by expanding its renewable energy capacity. This would benefit citizens as the decentralised nature of renewables means that households in Africa can be connected to the power grid more easily.

The production of hydrogen should also allow Africa to diversify its economy. Timmermans, therefore, promises the continent a shift away from its role as an exporter of raw materials to the production of green hydrogen.

“Because Africa can and must do more than export raw materials,” he said, adding that the economy could open up “sectors with higher added value, such as the production of green steel or green fertiliser”.

An African focus on the production of green hydrogen would also benefit Europe. According to Timmermans, “With cheap electricity from renewable energy sources, green hydrogen can be produced at competitive prices.”

The EU has lofty goals regarding the use of green hydrogen. By 2030, half of Europe’s hydrogen demand is to be met by green hydrogen, rather than natural gas which currently dominates production.

Hydrogen will also play an important role in the long-distance transport of goods, Timmermans said.

This spirit of optimism does not stop at Europe’s borders.

“This is an opportunity to demonstrate our capabilities as Africans and also to get all our countries to work together,” said Innocent Uwuijaren, CEO of the Hydrogen Africa Partnership.

If enough money and effort is invested in Africa, the continent would in turn help achieve the net zero emissions goal sooner than planned, he added.

However, not everyone is convinced by this promising narrative of Africa’s future as an exporter of green hydrogen.

Most observers anticipate two possible scenarios. In the best-case scenario, the development of a hydrogen economy will lead to workers in Africa learning additional skills and the resulting value chains will lead to “green” steel and fertiliser factories.

While this fulfils the promise of Africa becoming an exporter of green industrial products, there are concerns that not all countries would benefit equally.

Germany, for example, is clearly focusing on Nigeria and Angola. The Federal Foreign Office has opened so-called “hydrogen offices” in the capitals of these countries to support the development and export of hydrogen.

A second, more concerning scenario, is that hydrogen production could take up space that would otherwise be used to produce renewable electricity, pushing up power prices as a result.

Ultimately, the future of trading green commodities between Europe and Africa and the way the two continents interact will depend on the EU’s will to shape the future.

“To prevent hydrogen from getting stuck in old extractive ways, the EU needs to put the use of renewable energy, strict sustainability standards and support for new industries at the heart of its commitment to Africa,” said Moro.