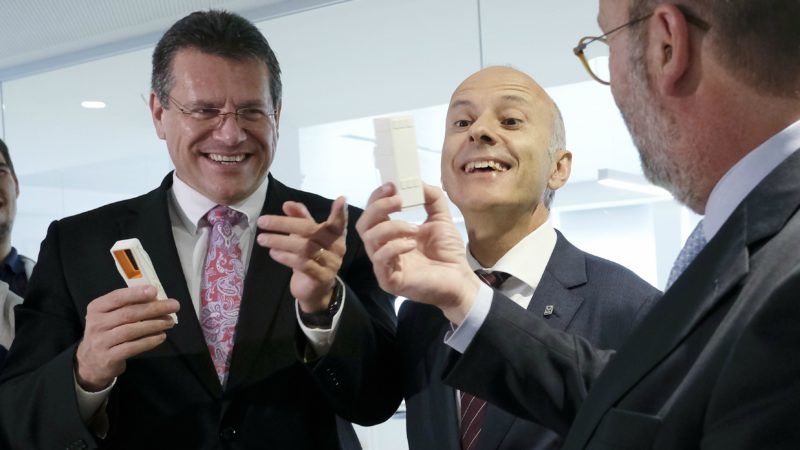 Šefčovič believes a 30% renewable energy target could be up for discussion for the 2030 package of clean energy laws, alongside the 27% agreed by EU leaders back in 2014.

The 27% target was included in the renewable energy directive presented by the Commission in November 2016. It is currently being discussed by lawmakers in the EU Parliament and member states representatives in the Council of Ministers.

But the rapid fall in renewable energy prices that occurred in the meantime has been “impressive”, and is forcing a rethink of the EU’s energy plans for 2030, Šefčovič told journalists on Thursday (23 November).

“The costs of reaching the 27% and 30% target are roughly the same,” Šefčovič explained, saying the fall “happened in a very short period of time”, disrupting the EU’s cost projections for 2030.

“Therefore, we gladly responded to the request of the European Parliament to update our modelling,” Šefčovič added, saying he hoped this would “make a contribution to the trilogue” negotiations on the renewable energy directive that are expected to take place early next year between the European Parliament and EU member states.

The Commission’s initial proposal was “at least 27%”, Šefčovič reminded. “Now, we have additional arguments to also discuss the figure of 30%”.

The updated cost modelling “is already done” and the document will be transmitted to Parliament, “in the coming days” after some final tweaks, Šefčovič said.

Jonathan Gaventa, director of the E3G think tank, hailed the Commission’s move but said it could have gone even further. “It’s good that they’re updating the numbers because the existing ones were hideously out of date. Certainly, from the power sector, the figures we’re looking at are consistent with 35% and above,” Gaventa told EURACTIV.

In the European Parliament, “many MEPs are pushing for 35%” renewables, Gaventa remarked, with environmental NGOs like WWF and CAN Europe even arguing for a 45% share.

The Commission’s initial analysis, presented in the 2016 Clean Energy Package, assumed that “lots of subsidies” would still be needed for renewables by 2030, with costs of generation estimated at around €130 per megawatt hour. But offshore wind prices have gone down dramatically in recent years, hovering around €60 per megawatt hour in the latest auctions organised in Germany, the Commissioner remarked.

“So this is a dramatic change, which happened in a very short period of time. And this trajectory can be expected to continue,” Šefčovič said, expressing his conviction that prices will go down even further in the near future.

The updated modelling will be presented “in the coming days,” after Šefčovič makes his annual State of the Energy Union address on on Friday (24 November).

As things stand, France, the Netherlands, and Luxembourg are the only EU countries that are currently below the trajectory to reach their renewable energy targets for 2020, Šefčovič said.

Giles Dickson, the CEO of trade association WindEurope said “It's good the Commission has recognised that the EU can do better than a 27% renewables target for 2030."

“It's not clear the Commission have taken full account of this," Dickson said, warning that "low ambition on renewables comes at a cost."

"By sticking with low ambition instead of 35% Europe would miss out on €92bn in wind investments and over 130,000 jobs that would otherwise have been created. The Parliament should stick to its guns and support 35% next week.”

In a joint statement issued earlier this month (6 November), the six companies said renewables had now become "the most competitive" form of new power generation in Europe.

"The energy sector is undergoing an unprecedented transformation, moving away from traditional ways of generating, distributing, and selling electricity towards a new paradigm where renewables are at the core," the group of six wrote in their joint statement.

They called upon European policy makers to "seize the moment" and "endorse an EU-wide binding target of 35% share of renewables in EU final energy demand by 2030, to be achieved through increased electrification of transport and heating sectors, together with a redesigned electricity market fit for renewables."

"The proposed EU binding target of at least 27% share of renewable energy in EU final energy consumption by 2030 lacks ambition," they warn, saying it "would slow-down the current rate of renewables deployment in the EU, affecting industrial value chains and putting at risk the gains and competitive advantage achieved in the past decade."