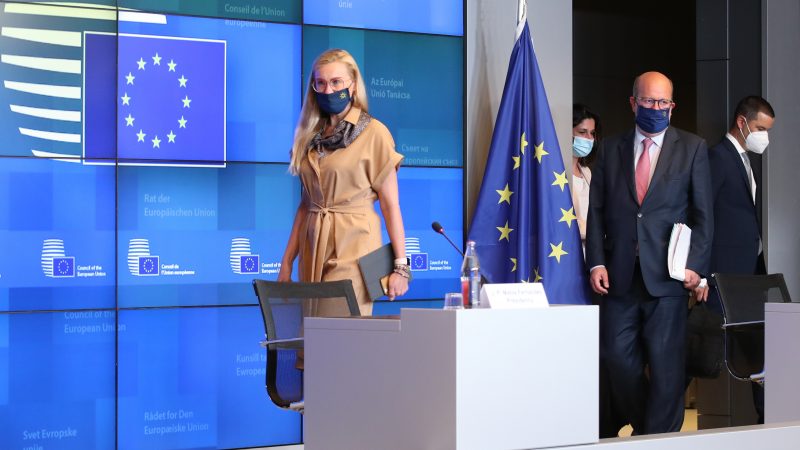 The EU’s “TEN-E” rules define which cross-border energy projects can be labelled Projects of Common Interest (PCI), giving them access to EU funds and fast-tracked permits.

The EU is upgrading the rules to comply with its climate change targets, and in December the European Commission proposed a new version excluding dedicated oil and gas infrastructure.

Energy ministers from EU countries on Friday agreed their position on the rules, which they must now negotiate with the European Parliament.

Exception for Malta and Cyprus

Ministers agreed that while new dedicated gas and oil projects should generally not receive support, projects in the island countries of Malta and Cyprus with PCI status should retain it until those countries are fully connected to the European gas network.

That could help ensure the completion of Greece, Cyprus and Israel’s Eastmed pipeline to supply Europe with gas from the eastern Mediterranean.

Portugal’s environment minister, João Pedro Matos Fernandes, said the agreement is “right in line with the decarbonisation” of Europe because the only cases in which the TEN-E will contemplate projects of “non-renewable gases” will be in Malta and Cyprus.

“In everything else, the Union’s financial support for fossil fuels has ended and, therefore, we are in line with the decarbonisation objective, knowing that energy has a very significant influence in this decarbonisation,” he said at a press conference after the meeting.

According to an EU Council press release, the revision of the TEN-E regulation also updates the categories of infrastructure that are “eligible for support”, with a “special emphasis on decarbonisation”, adding a “new focus” on “offshore electricity grids, hydrogen infrastructure and smart grids”.

Ministers also said that until 2028, support could go to converting gas pipelines to carry hydrogen, and those projects could continue to carry natural gas blended with hydrogen until 2030.

Those projects should demonstrate how they will shift to carry hydrogen only by the end of this period, the EU council, which represents member states, said in a statement.

“During a transitional period until 31st December 2029, dedicated hydrogen assets converted from natural gas can be used to transport or store a pre-defined blend of hydrogen with natural gas or biomethane,” the statement said.

“The purpose is to gradually decarbonise this sector and increase the share of renewable gases in the pipelines,” it added.

Germany, Spain, Austria and Luxembourg did not support the agreement.

Those countries, plus others including Denmark and the Netherlands, had called ahead of the meeting for rules to exclude fossil fuels, including gas. The TEN-E policy will be a “litmus test” of the EU’s commitment to eliminate its net emissions by 2050, they said.

Now that the Council have agreed their “general approach” to the TEN-E revision, negotiations can start with the European Parliament, which has an equal say on the matter.

“We count on the Parliament to improve the text,” said Claude Turmes, the energy and infrastructure minister of Luxembourg, in comments posted on Twitter.

Other states, including the Czech Republic and Slovakia, had wanted gas blending to be allowed until 2035.

The @EUCouncil just agreed on a common position on #TENEregulation. This is a step in the right direction thanks to the efforts of the 11 Member States against #fossilfuels but there are still too many uncertainties on blending smart gas grids (1/2)