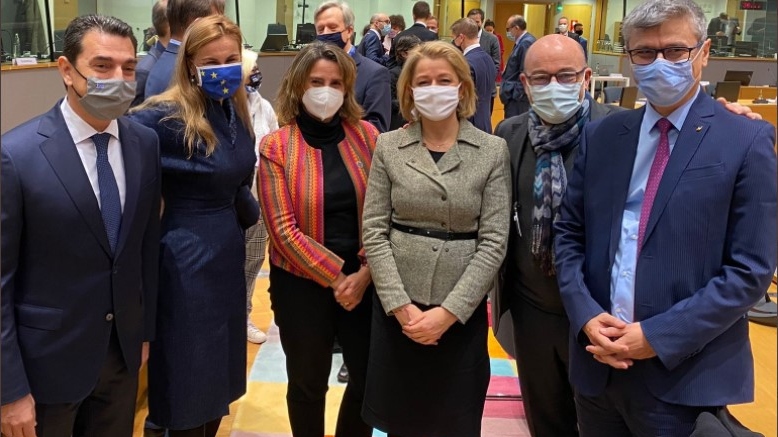 The energy ministers of France, Greece, Italy, Romania and Spain submitted a joint paper ahead of today's talks in Brussels calling for a reform of EU electricity markets. [@mitecogob / Twitter]

Energy ministers from European Union countries are meeting in Brussels on Thursday (2 December) to debate their response to high gas and electricity prices, with countries still divided over whether the recent price spike calls for an overhaul of the bloc’s energy market rules.

While gas prices have retreated from the peak seen in October, they remain relatively high and reserves are depleting steadily as the winter heating season settles in.

This has pushed up electricity prices, which are driven by “marginal” production capacity available from gas power plants that can be fired up at short notice to meet peak demand.

But EU countries like France and Spain say this power pricing mechanism is unfair because it does not reflect their own energy mix, dominated by cheap low-carbon electricity coming from renewable sources or nuclear power plants.

Energy prices must “reflect the costs of the generation mix used to serve their consumption,” said a paper submitted by France, Greece, Italy, Romania and Spain ahead of today’s talks.

“We must act in the short term in order to ensure that consumers perceive the benefits of zero emissions technologies in prices signals while protecting them from the increasing volatility of natural gas markets,” the paper said, calling for an amendment to the EU’s electricity directive to address their concerns.

The group is calling for reforms allowing consumers “to request a supply offer that protects them from short-term electricity price variations” and additional warnings for consumers who are on a dynamic price contract.

The absence of such warnings, “could lead consumers to take risks they cannot manage, or at least risks they are not aware of,” the group said.

The European Commission has so far remained cautious about this, saying wholesale electricity markets are currently functioning well and should not be tampered with.

A toolbox of policy measures, outlined by the Commission earlier that month, highlights short term measures that EU countries can take in order to protect vulnerable consumers from energy price spikes, such as tax breaks and support schemes for the poor.

In the run-up to Thursday’s meeting, a group of nine EU countries supported the Commission’s stance, saying the current energy price spike must be addressed “within the current European framework for climate and energy”.

“We agree with the European Commission that in the short term, the price hike can be best addressed through temporary and targeted national actions by member states…to protect vulnerable consumers and businesses,” said a paper signed by Austria, Denmark, Estonia, Finland, Germany, Ireland, Latvia, Luxembourg, and the Netherlands.

“We cannot support any measure that would represent a departure from the competitive principles of our electricity and gas market design,” the nine added, warning that any deviation from these “would undermine the cost-effective decarbonisation of our energy system” and “jeopardise affordability and security of supply”.

The group of nine also supported the conclusions in a preliminary assessment by ACER – the EU Agency for the Cooperation of Energy Regulators – which highlighted that reliance on gas for power generation “is the main factor explaining price differentials across countries.”

Countries that are well interconnected with neighbours are also better shielded from price rises, ACER said in its preliminary report, published on 15 November.

Ahead of tomorrow’s 🇪🇺 #TTE #Energy Council, where #EnergyPrices are again on the agenda, 🇦🇹🇩🇪 🇩🇰🇪🇪🇫🇮🇮🇪🇱🇺🇱🇻🇳🇱publish a joint statement following the publications of the ACER and ESMA reports. Read our joint statement👇 pic.twitter.com/9flO1LyUGd