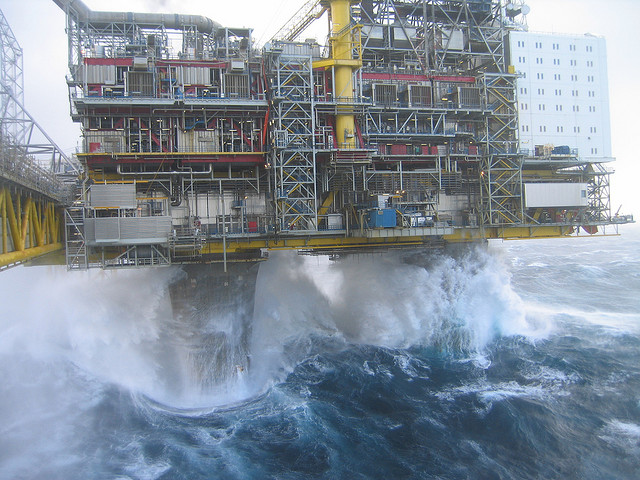 According to the European Commission, the UK is among Europe's least dependent on energy imports, due to its North Sea fossil fuel assets. [Richard Child/Flickr]

Energy consumption in the European Union has fallen to levels last seen more than two decades ago, statistics published on Monday showed.

The dramatic drop in annual consumption – in 2013, the year to which the new research applies, it was down by more than 9% from its 2006 peak – reflects in part the continuing economic troubles in the eurozone, but also efforts taken by member states and businesses to cut energy use and improve efficiency.

Despite the plunge, Europe remains heavily dependent on fuel imports, with more than half of energy needs supplied by production from abroad, including the Middle East and Norway. Under oil prices at the time, that amounted to a cost of more than €400bn (£297bn) in imports in the year in question, but that figure is now volatile owing to the effects of a sharply lower oil price and the exchange rate of the Euro.

The UK was one of the least dependent on imports of the biggest member states, buoyed by its offshore fossil fuel supplies, with 46.4% of primary energy coming from overseas. That relative independence is likely to be eroded further in future years, however, as the North Sea supplies of oil and gas are dwindling fast.

France, where nuclear reactors supply the vast majority of electricity needs, was also less dependent than the average, at 48% of supplies imported. By contrast, about 63% of Germany’s energy came from outside, and 77% of Italy’s.

Nuclear power accounted for the biggest slice of the EU’s own generation of electricity, with 29% of production. Just behind came renewable sources of energy, which in total generated just under a quarter of homegrown power.

The UK used just over 200 Mtoe in 2013, a substantial drop on its 210 Mtoe in 1990, after a rise in the early part of this century to 230 Mtoe. The government has sought to encourage energy efficiency by home insulation schemes and levying a price on carbon for businesses.

Some of the EU’s decline in consumption has come from progress made in energy efficiency among newer member states in eastern Europe, which inherited notoriously inefficient infrastructure from their years as part of the energy-rich Soviet bloc. Bulgaria, for instance, used nearly 28 Mtoe in 1990, but only 17 Mtoe in 2013. Lithuania’s use dropped from 16 Mtoe to 7 Mtoe over the same period. Such one-off drops are unlikely to be repeated.

The European Commission is working on proposals for new legislation to force member states to make their buildings more energy efficient, a leaked document revealed on Friday. Those plans are likely to be brought forward in October, but will take years to come into force, and are geared towards helping meet the EU’s energy efficiency target for 2030.

A boost to energy efficiency will also help the EU to meet its international pledge of cutting greenhouse gas emissions by 40%, compared with 1990 levels, by 2030. That target is likely to be enshrined in a new global agreement on climate change, scheduled to be signed in Paris in December.