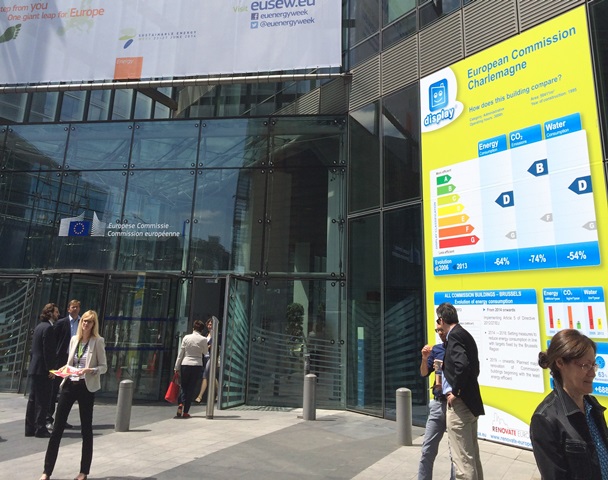 SPECIAL REPORT: The European Union institutions’ buildings policy in Brussels has been “unambitious” in terms of energy efficiency, according to the European Court of Auditors.

Green building standards and initiatives promoted by the EU for greater efficiency are not consistently employed for new buildings or major renovation projects.

Their special report exposed shortcomings in the approach of the European Commission, European Parliament and EU Council, as well as other EU organisations. The report looked at 2005-2013.

The auditors called on the Commission to propose a common policy for reducing the carbon footprint of the administrative operations of the EU institutions and bodies.

Such a policy should include a quantified overall reduction target for greenhouse gas emissions for the year 2030.

It is through the design processes of a new building, or for a major renovation, that the greatest impact can be made on its future energy performance, the report said.

“Improving the energy performance of buildings will be a major challenge for the coming years,” the report said. “It is important that EU institutions and bodies set ambitious targets for their own buildings, if they want to reduce emissions.

Ladislav Balko, of the European Court of Auditors, said, “Paying attention to environmental performance in their daily operations is important not only for their own credibility but also for the credibility of the climate policy of the European Union.”

But a systematic approach focused on efficiency was lacking, the auditors found. Policies backed publicly by the institutions, such as the requirements of Green Public Procurement (GPP), were not put in place as a matter of course.

The GPP’s criteria are for those who want to purchase the best environmental products available on the market.  Among the products and services covered are thermal insulation, indoor lighting, and glazed windows, doors and skylights.

But green procurement is treated as an option rather than an obligation under current EU financial law.

The Green Building Programme (GBP) was launched by the Commission’s Joint Research Centre in 2005. The voluntary programme is to encourage owners of non-residential buildings to use cost-effective energy efficiency measures in their buildings.

A GBP partner must make sure any new building consumes 25% less total primary energy than the existing building standard. And any existing buildings should consume at least a quarter less energy after refurbishment.

“None of the audited EU institutions had adhered to the approach promoted under the GPP toolkit and the GBP for building projects in Brussels,” the auditors said.

The Council told auditors the GBP was not relevant for its Europa building, which is currently under construction.

Major parts of the building which have to be integrated in the project were built between 1922 and 1927 and are listed. According to the Council, this was an important technical constraint with a considerable impact on the building’s energy performance.

The Commission expects to have replaced or renovated 50 % of its total surface area in Brussels by 2025. In the coming years, the Parliament will need to renovate its main buildings in Brussels. The first to be renovated will be the Paul Henri Spaak building.

The European eco-Management and Audit Scheme is a programme developed by the Commission for companies to evaluate report and improve their environmental performance, including that of their buildings. Currently, more than 4,500 organisations and approximately 8,150 sites are EMAS registered worldwide.

But progress in introducing it to the European institutions has been slow, the report said. EMAS registration for public administrations has been possible since 2001 and, in June 2014, seven of the audited EU institutions and bodies were registered.

EMAS at the Commission had significant limitations in scope, the auditors said. All EU institutions and bodies should sign up with EMAS and implement it, while reducing any limitations to its scope, it recommended.

The EU Office for Harmonisation in the Internal Market assessed the financial benefits of its EMAS?driven investments aimed at increasing the energy efficiency of its building.

These investments included solar panels, interior renovation and a cooling plant between 2010-2012. The Office expects to save about €2.5 million, with the return on the investment, the costs savings, due in about seven years. 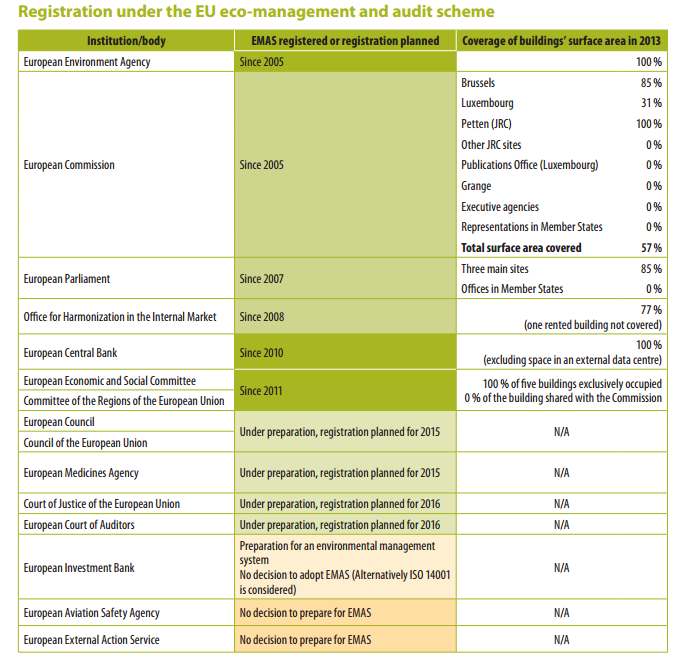 Not all bad news

In June, the Commission, in partnership with Renovate Europe and Energy Cities, displayed a giant poster on the side of its Charlemagne building, highlighting the energy consumption of Commission buildings.

The EU’s Energy Efficiency Directive (2012/27/EU) requires member states to renovate 3% every year of their buildings owned and occupied by the central governments. The Commission has committed itself to reach the same result.

That commitment could not be taken into account by auditors.

“The average energy consumption per square meter for the Commission buildings in Brussels has decreased by more than 30% between 2005 and 2013, which is more than 4% per year, and that is just the beginning!” said Marc Seguinot, Head of Unit in the OIB, responsible for the management of the Commission’s buildings.

“Such significant results have encouraged us to go further, and we have planned for major renovation of Commission buildings from 2019.”

Despite increasing awareness of the benefits of renovation, not all the EU institutions have been following the advice they promote, according to the European Court of Auditors.

But, as earlier stories in this special report has shown, there is optimism that could change, despite EU leaders watering down 2030 efficiency targets at their October meeting.