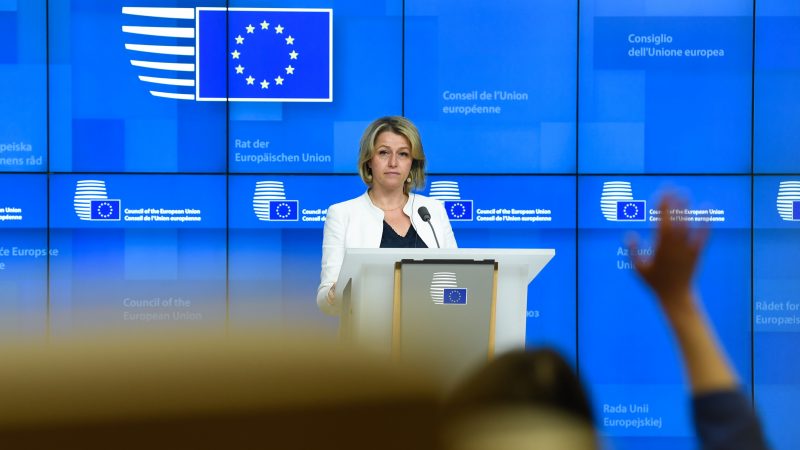 “All member states have said that sanctions need to be enforced and contracts need to be respected. These contracts state payment in euros,” said Barbara Pompili, the French ecology minister who chaired Monday’s meeting. [Copyright: European Union]

The EU’s 27 energy ministers came to Brussels on Monday (2 May) in a show of unity with Poland and Bulgaria which saw their Russian gas supplies cut off last week over their refusal to pay in roubles.

In March, the Russian government decreed that payments for gas would have to be made in roubles going forward, a move aimed at propping up the Russian economy in the face of crippling economic sanctions imposed by Western countries in retaliation for the Kremlin’s war in Ukraine.

Russia’s proposed payment system, involving the conversion of euros or dollars into roubles, is considered a violation of sanctions levied against Moscow, the European Commission has said.

“Paying in roubles, knowing the full procedure as set out by Russia” cannot be accepted, explained the EU’s Energy Commissioner Kadri Simson who spoke after an emergency meeting of EU energy ministers in Brussels on Monday (2 May).

“All member states have said that sanctions need to be enforced and contracts need to be respected. These contracts state payment in euros,” added Barbara Pompili, the French ecology minister who chaired Monday’s meeting.

With Poland and Bulgaria cut off from Russian gas, it would not be in the interest of purchasers to continue relying on the Kremlin, Simson added.

“Countries should not have any illusions they can rely on the good faith of Gazprom,” she added during a press briefing.

She also denied reports that some EU countries have already made preparations for making payments in roubles, saying: “No, we don’t have any information that this is true”.

Two weeks ago, the EU executive provided guidance to EU states and companies on how to best approach the Russian decree that requires gas deliveries to be paid in roubles. But EU governments soon complained that the guidance was confusing and requested more clarity on what constitutes a violation of the EU sanctions against Russia. 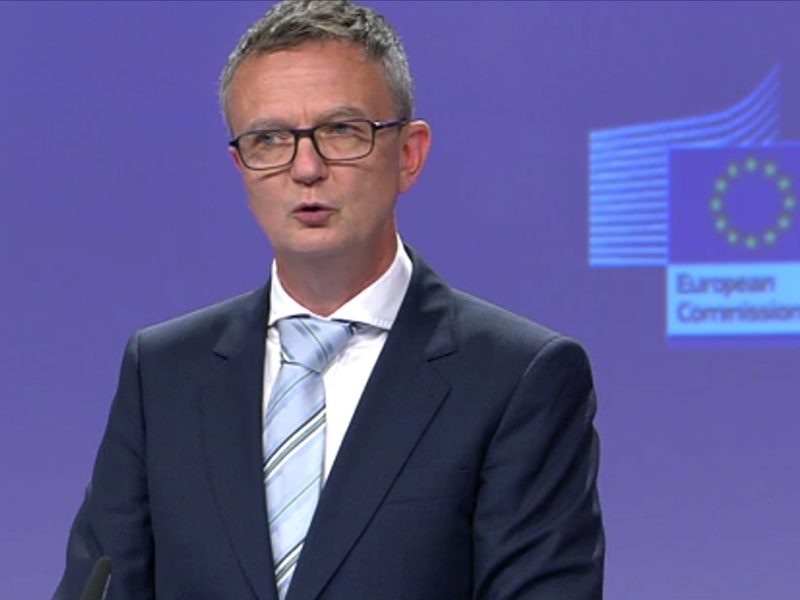 The European Commission on Thursday (28 April) warned buyers of Russian gas they could breach sanctions if they converted gas payments into roubles, as officials struggled to clarify the EU’s stance on Moscow’s payments scheme, which has sowed confusion in the bloc.

More EU guidance on its way

Several EU countries are to renew supply contracts at the end of May, and reports suggest some of them could seek to work around the sanctions by following the method put forward by Moscow.

This would entail a firm opening two accounts in Russian state energy giant Gazprom’s bank. Payments would be deposited in one account in euros or dollars, then be passed through the sanctioned Russian central bank, before arriving in the second account in rubles.

Simson and some ministers seemed to say that this would still constitute a sanctions breach. But other member states demanded further clarification from the European Commission’s experts.

“What has happened today is that the European Commission and the presidency have confirmed that paying in rubles is unacceptable, that it is a breach of sanctions and a breach of European solidarity,” Poland’s environment minister Anna Moskwa said.

“Many countries, including the Baltic states, Denmark, the Netherlands and Finland, have today reaffirmed solidarity and that they will certainly not pay in rubles,” she said.

But Sweden’s Khashayar Farmanbar, minister for energy and digital development, said: “I think the clarification is still ongoing … it is a complex process.”

“I mean, paying with one currency is one thing, but if that involves another country’s central bank, then it becomes part of a different part of the package, and that is going to be a bit tricky.”

The Czech minister of industry and trade, Jozef Sikela, said he had asked for a “clear explanation of how to proceed”.

During the meeting, European officials were forced to deal with media reports that Italy wants to continue to pay in rubles until there is a legal alternative.

Simson said she had spoken to Italian minister Roberto Cingolani, who did not attend the meeting, and that the report was “misleading” – but she promised to provide him and all EU capitals with clearer guidance on resisting Putin’s ultimatum.

Planning for the end of Russian gas

In parallel, EU states are making plans for the eventuality of a full Russian gas cut.

According to Simson, there is “clear willingness to support Poland and Bulgaria via reversed flows” of gas coming from other EU countries. “Contingency plans [are] in place so that each member state know that they have alternative supply routes,” she said.

“The situation demands good coordination and solidarity, given the landlocked situation of some EU states and their dependence on their neighbours as well as contingency plans in our neighbourhood, namely Ukraine and Moldova,” Simson explained.

At the heart of the EU’s response is the Commission’s REPowerEU plan, tabled in March, which aims to decrease the bloc’s dependence on Russian gas by two thirds before the end of the year and end its reliance entirely “well before 2030” – probably by 2027.

The EU executive is expected to follow up with more detailed proposals on 18 May, ahead of a summit of EU leaders on 30 and 31 May.