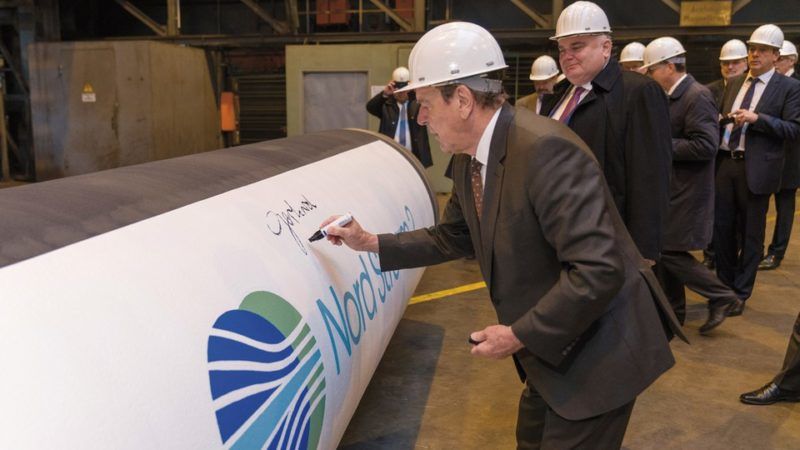 Former German Chancellor Gerhard Schröder, now chairman of the board of directors of Nord Stream 2, signed one of the large-diameter pipes which are produced for the pipeline in Germany, last year. [Nord Stream 2]

In a letter to the Danish government seen by the newspaper, the European Commission invites EU countries to provide their opinions about Nord Stream 2, clarifying that the pipeline cannot be operated in a “legal vacuum”.

The Commission will ask the member states for permission to initiate negotiations with Russia in order to reach an agreement that pivotal principles from the Union’s legal framework will be imposed on projects like Nord Stream 2, Commission Spokeswoman Anna-Kaisa Itkonen told the newspaper.

The EU is divided between Eastern European and Baltic Sea countries that fear a new pipeline carrying Russian gas across the Baltic will make the EU a hostage to Moscow – and those in Northern Europe, most especially the main beneficiary Germany, for whom the economic benefits take priority.

The Swedish government said on Monday (30 January) that it would not hinder Russia’s Gazprom in its plan to use a southern Swedish port as a base for constructing a gas pipeline project that has raised security concerns.

Poland and other East European countries see in Nord Stream 2 a Russian plot to undermine the bloc’s strategic interests and competition rules.

Conversely, Western countries participating in the project see it as business enterprise and reject the accusations.