Talks on renewable energy policy in Europe reached un unexpected breakthrough early this morning after negotiators from the European Parliament and  EU member states were able to reach a compromise on a 32% objective and a complete phase out of palm oil use in transport by 2030.

Talks carried on until early into the morning hours, despite the fact that negotiators were left with no interpreters after midnight.

The deal on the Renewable Energy Directive finally came at around 04:30, according to Sean Kelly, one of the lawmakers sitting on the Parliament team, who tweeted a picture of ecstatic MEPs posing with Miguel Arias Cañete, the EU’s climate and energy commissioner who was acting as a mediator in the talks.

It's 4 in the morning & what's more the dawning & we are happy as deal done on #RED11 . Pleasure to work with such great people @EU_Commission @Europarl_EN @EUCouncil Thanks all @pepeblancoEP @JerzyBuzek @BasEickhout @ClaudeTurmes @tamburrano @MAC_europa pic.twitter.com/l8FSGl0u1O

The deal includes a legally-binding EU-wide target of 32% for renewable energy by 2030, with “an upward review clause by 2023 at the latest,” according to Claude Turmes, a Luxembourg MEP who represented the Greens political group in the Parliament’s team.

Germany had clearly stated at a ministerial meeting last Monday that “it wouldn’t support a target above 32%,” Turmes explained after the talks concluded this morning, saying this left no room for negotiators to go higher.

That came as a relative disappointment for environmental activists at Greenpeace who said the 32% target “is far too low” and “falls dangerously short of the level necessary to prevent catastrophic climate change”.

One key aspect of the agreement is a target for renewable energy in transport, which was eventually set at 14% by 2030 – a move seen as a way to encourage the take up of electric vehicles.

As part of the transport objective, the European Parliament also managed to clinch an agreement that will lead to a phase out of palm oil by 2030, starting with a freeze on existing quantities of imported palm, Turmes told EURACTIV.

That is likely to anger Malaysia and Indonesia, the world’s two biggest producers of palm oil, which have threatened of trade retaliation measures in case a ban is agreed.

The biofuels part of the deal also includes a freeze on so-called first generation biofuels like ethanol, which are produced domestically, at the levels of production reached by each EU member state in 2020. A corresponding 3.5% target was set for so-called second generation biofuels coming from non-food crops, like wood residues.

Another hotly debated point in the talks related to renewable energy “self-consumption”, a term which mainly covers solar panels mounted on rooftops of homes and small factories. Installations of 25 kilowatts will be exempted from certain grid obligations, a move likely to please advocates of small-scale renewables, and the solar PV industry.

The agreement between the European Parliament and EU governments establishes the right of European citizens, local authorities, small businesses and cooperatives to produce, consume, store and sell their own renewable energy, without being subject to punitive taxes or excessive red tape, said Greenpeace.

“This deal, for the first time, recognises the rights of ordinary people to participate in Europe’s energy revolution and overturns some very big barriers to the fight against climate change,” said Sebastian Mang, an EU policy advisor at Greenpeace. “It gives people and communities greater control over their energy use, empowering them to accelerate the development of renewable energy and challenge energy giants across the continent,” he said.

REScoop.eu, an association representing renewable energy cooperatives, was equally pleased. “This is a remarkable day for energy communities and citizens across Europe,” said Dirk Vansintjan, President of REScoop.eu. “Up until yesterday they had no recognition in Europe’s energy policy. Now, they have a set of rights tools to empower themselves so that they can prosper in the energy transition,” Vansintjan said.

The new EU directive “now contains a strong definition of ‘renewable energy communities’ as well as a definition of ‘self-consumption’,” REScoop.eu explained, praising the European Parliament for sending “a clear signal” that citizens and communities are key to the success of the energy transition.

The deal includes the creation of contact points to advise and support people interested in installing solar panels, a barrier until now because of the sometimes complicated procedures in place. The EU has also agreed to remove all charges on electricity produced by households that is consumed on premises, meaning ’taxes on the sun’, as it has come to be called in Spain, would be impossible.

“The installation costs might still be quite large for some people, but renewable energy does pay off in the long term and this EU text will help people navigate through the process,” said Monique Goyens, Director General of the European Consumer Organisation (BEUC).

Deal! New 32% renewables target for 2030. Renewables are good for Europe, and today, Europe is good at renewables. This deal is a hard-won victory in our efforts to unlock the true potential of Europe's clean energy transition. Thank you all! #REDII #ParisAgreement #CleanEnergyEU pic.twitter.com/oluzsJ1alm

The negotiation on the Renewable Energy Directive got off on the wrong foot after separate talks on the Energy Efficiency Directive collapsed earlier in the evening, at 6pm.

The key disagreement there was over the headline target. The European Parliament said they were not willing to go below a 32.5% target for energy savings by 2030, along with a 0.84% annual savings. But Bulgaria, which currently holds the rotating Presidency of the Council, felt it did not have a mandate to go that high.

There has been confusion over how flexible Bulgaria’s mandate is since an Energy Council in Luxembourg on Monday revealed changed positions from new governments in Spain and Italy, which backed higher ambition on renewables and energy efficiency. 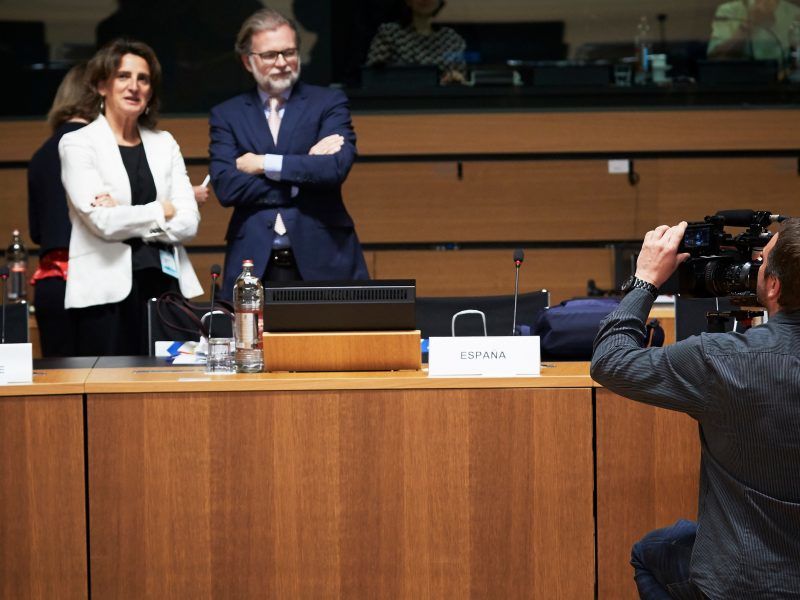 What remains unclear at this point is whether Bulgaria will try to revive talks before the end of its rotating EU presidency on 1 July, or if it will hand over the file to Austria, which takes over the rotating presidency on that day.

But Turmes said there was now a chance of seeing an agreement on the Energy Efficiency Directive at an ambassador’s meeting on Friday, before a final round of trilogue talks on Tuesday.

No deal today on #energyefficiency. Getting close, not there yet. I call on the Parliament and the Council to be flexible and seek compromise. That’s the only way for Europe to forge ahead with an ambitious clean energy transition. To be continued…

"The deal is a good one for solar. We see a much more ambitious target than was expected just a few months ago and importantly we have a strong framework for self-consumption and prosumers. Households wake up this morning with the knowledge that they will have a new right - the right to self-generate, consume and store the energy they produce. This is a major achievement. We are also delighted to see that administrative procedures will be streamlined so that permitting for new installations can take no more than 1 year - this will hugely reduce the soft costs of solar."

"EU decision-makers have agreed a paltry 32% target for renewable energy that is both inadequate and shows a failure to grasp a shifting energy landscape including rapidly falling renewables costs."
"However, communities have won a key concession, gaining recognition for their right to generate, consume and sell energy – this gives people an opportunity to drive a transformation of our energy system, surpassing the bleak expectations of these targets."

“The EU has removed the single biggest driver for food based biofuelexpansion in Europe: the infamous transport target. Governments now have no more excuse to force drivers to burn food or palm oil in their tanks after 2020 and should design policies that promote the use of renewable electricity or biofuels based on wastes and residues.”

“The outcome on renewables is a well-balanced compromise between Council and Parliament. The higher shares of renewable energy must be combined with a more sound approach to market-based integration and electrification”.

“Europe needs all sustainable renewables in the energy transition to achieve Europe’s climate goals and ethanol is critical to transport decarbonisation. Of course, this is not a perfect solution. Allowing Member States to undermine the transport target by lowering the crop cap or relying on artificial multipliers gives the illusion of progress and puts Europe’s commitment to decarbonising transport into question. Capping crop-based biofuels at 2020 levels also unfairly penalizes sustainable biofuels like European renewable ethanol, which if given the chance could drive EU decarbonisation even further – but it is a major improvement over the initial proposal from the Commission.”

“EU member states will still be allowed to burn massive amounts of food. Biofuels made from palm oil, rapeseed, and other food crops, are destroying forests, pushing people off their land, and could fuel the next spike in food prices. Biofuels made from food crops are not the answer to climate change, they are part of the problem. Sadly, EU rules for renewable energy in the transport sector remain on a road to nowhere.”

“A bright future beckons for people interested in lowering their energy bills by investing in renewable energy. The installation costs might still be quite large for some people, but renewable energy does pay off in the long term and this EU text will help people navigate through the process. Solar energy should be within everybody’s reach. A democratisation of energy would allow our society to pull away from dirty sources like coal and rely less on energy coming from unstable countries around the world.”

"With the deal reached on the RED II, the EU will create the framework needed to boost decentralised energy by removing the administrative burdens that were blocking their uptake. By breaking down this administrative wall, the EU will kickstart the self-consumption and community energy revolution, as it will make renewable energy more accessible and economically attractive for consumers. A consumer-driven energy transition is a central pillar of the Energy Union’s mandate, and we are thrilled to see that with the RED II, a strong foundation for this is being built."

"AEBIOM welcomes the risk-based approach, the 20 MW threshold and the criteria themselves. You will always find people to complain about the criteria. But for the first time the European legislators gives a sustainability roadmap to the solid bioenergy sector. Despite controversy, policy makers decided to take a challenging but pragmatic approach considering field realities.”

“Energy Efficiency is the cheapest and most effective route to cut climate-harming emissions and essential to delivering the Paris Agreement. Unfortunately, the agreement on renewables is overshadowed by the collapse of talks on energy efficiency and the blame lies squarely on national capitals. While the European Parliament fought for a higher and binding target for energy efficiency, governments including the UK, Poland, Czech Republic and Slovakia blocked progress. Celebrating the deal on renewables would be premature, and real climate leaders understand that.”