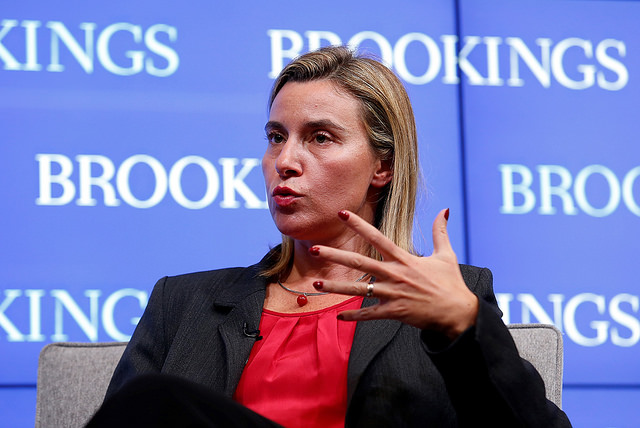 Federica Mogherini wants increased climate diplomacy ahead of the COP 21 in Paris. [EEAS/Flickr]

The European Union will exert “maximum pressure” to extract by June at the latest pledges from major economies to cut greenhouse-gas emissions, a document seen by Reuters says.

Mindful of the failure of its 2009 climate summit in Copenhagen, the United Nations is preparing ahead of time for a UN conference that from late November will try to forge a new global climate deal.

It will be hosted by EU nation France, giving the 28-country bloc particular reason to want a successful outcome.

A week of talks that began in Geneva on Sunday will seek to produce a draft negotiating text to be distributed to national capitals in May, giving governments some six months to get ready for a final deal.

European foreign policy chief Federica Mogherini has been pressing for increased climate diplomacy, employing the EU’s army of diplomats and putting climate change on the agenda of all major ministerial meetings, not just those of energy and environment ministers.

“For the first half of the year, priority should be given to exerting maximum pressure on the major economies for them to be ready with their intended nationally determined contributions (INDCs) by the first quarter of 2015 – or by June at the latest,” a draft climate diplomacy plan, seen by Reuters, says.

UN leaders say deadlines are crucial. If promises on emissions are made early, it gives time to try to shame the nations that have offered no action into promising to reduce their greenhouse gases.

So far, UN negotiations have settled on a deadline of the first quarter for the emissions cuts known as INDCs “for those parties ready to do so”. They have not mentioned the “June at the latest” target and many governments have been vague.

The climate diplomacy plan was endorsed last month at a meeting of EU foreign ministers, but not published.

It also says the EU must “target and involve national parliaments, local authorities, civil society, the private sector and journalists at home and abroad”.

And it suggests seeking celebrity climate ambassadors in Europe, following the US examples of Al Gore and Leonardo DiCaprio.

The EU has reached an outline agreement on a 2030 goal to reduce its emissions by 40% compared with 1990 levels.

It needs to back that up with legislation and it expects to set its INDCs for the UN process in March.