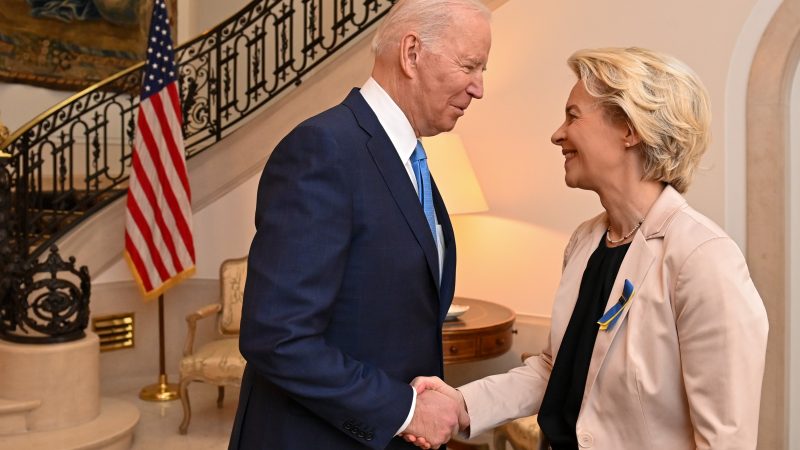 “We aim to reduce [our] dependency on Russian fossil fuels and to get rid of it,” said European Commission President Ursula von der Leyen, who was speaking alongside US President Joe Biden at a news conference in Brussels.

“This can only be achieved through, of course, first of all, investment in renewables, but also through additional gas supplies, including LNG deliveries,” she added.

Biden and von der Leyen announced the formation of an energy task force to help reduce Europe’s reliance on Russian fossil fuels and work together to increase renewable energy and energy efficiency.

In 2021, Europe imported 155 bcm of Russian gas, about 45% of its total supply, according to the European Commission. However, in the face of high gas prices and the war in Ukraine, Europe is working to break away from this reliance as soon as possible.

“Today we’ve agreed on a joint game plan for that goal while accelerating our progress towards a secure, clean energy future,” Biden said.

“The United States and the European Union are going to work together to take concrete measures to reduce dependence on natural gas – period. And to maximise the availability and use of renewable energy,” he added.

The European Commission will also work with EU countries to ensure they are able to receive about 50 bcm of additional LNG until at least 2030, according to a factsheet provided by the White House. This includes LNG terminals and infrastructure as well as improving gas storage.

“We want as Europeans to diversify away from Russia, towards suppliers that we trust, that are friends and that are reliable,” von der Leyen said.

Since US LNG plants are producing at full capacity, analysts say most of the additional gas promised to Europe would have to come from exports that would have gone to other parts of the world.

That is partly happening because European gas prices in recent months have often been the highest in the world. However, some supply cannot be easily redirected as it is under contract.

Since the beginning of the year, the EU has been stepping up its efforts to secure more LNG through talks with supplier countries, resulting in record deliveries of 10 bcm of LNG in January. That month, US deliveries rose to 4.4 bcm – around double the norm for that month.

Environmental groups criticised the plan, with NGO Global Witness calling it “a misguided and dangerous path” to fast-track new infrastructure for importing fossil gas into Europe.

“Europe already has enough capacity to import the amount of gas the US intends to supply, and building new import terminals would mean locking in fossil gas imports for years to come,” warned Murray Worth, gas campaign leader at Global Witness.

“Doubling down on gas is not the solution, whether it comes from Russia or the US. This announcement does not and must not be used to justify more fossil fuel projects in the US,” he added.

Instead, Worth argues that Europe should focus on its energy investments and improving building renovation, heat pumps and renewable energy sources.

But while Europe plans to double down on renewables to break free from Russian energy imports, its wind power capacity is falling behind due to lengthy and complex permitting.

Some industries like cement and steelmaking also cannot easily be electrified and will continue to need gas in the foreseeable before they can switch to alternatives like biomethane or hydrogen.