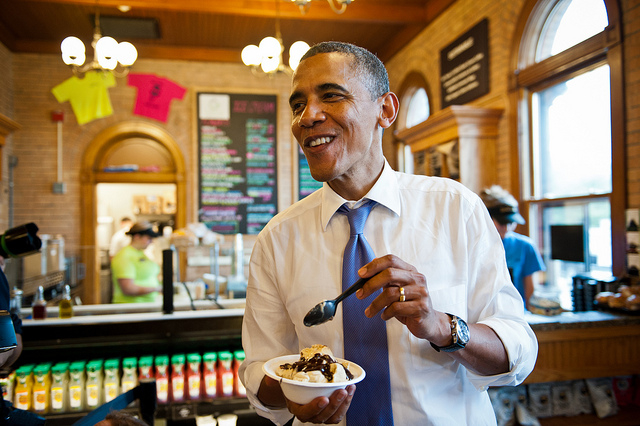 EU leaders hailed President Obama’s announcement yesterday (2 June) of a planned 30% cut in US power plant emissions by 2030 as a crucial step towards decarbonisation, and a “positive signal” to other countries ahead of a summit to agree a global climate deal in Paris next year.

Greenhouse gas emissions by 1600 US power stations will now be capped, even though 600 of them are powered by coal and around half may have difficulty meeting the new standard.

In Brussels, the proposed new Emissions Performance Standard (EPS) was praised for its vision, even if it still viewed as inadequate to the scale of the problem.

”This proposed rule is the strongest action ever taken by the U.S. government to fight climate change,” the EU’s climate action commissioner, Connie Hedegaard said in a reaction statement.  “If implemented as planned, this measure will help the country meet its 2020 emissions target.”

Obama has previously committed to reduce its emissions 17% on 2005 levels by 2020, well below the Kyoto Protocol commitments, but a step change from his predecessor George W. Bush, who took the US out of the treaty.

The new carbon cuts will be measured against 2012 levels, which were substantially lower following the recession which slashed US and global emissions.

Hedegaard saw hope in Obama’s announcement for next year’s Paris summit which is intended to finalise a successor to the Kyoto deal which expired in 2012. “But for Paris to deliver what is needed to stay below a 2°C increase in global temperature, all countries, including the United States, must do even more than what this reduction trajectory indicates,” she said.

As well as cutting CO2 emissions, the new EPS anticipates a 1.5% annual increase in energy efficiency, and a reduction in particle, sulphur dioxide and nitrogen pollution by more than 25%, according to the US’s Environmental Protection Agency (EPA).

The EPA also expects the new rule to cut electricity bills by 8% and avert as many as 6,600 premature deaths, 150,000 asthma attacks in children, and up to 490,000 missed work or school days, saving some $93 billion in the process. But that has not prevented a storm of criticism in the US from fossil fuel-powered industries, their suppliers, and politicians in coal states that may be stung by falling domestic demand.

Many European green groups though were energised Obama’s move, with 11 heavy-hitters including Greenpeace, WWF Europe and Birdlife putting out a statement calling for reciprocal EU action.

“Europe has long claimed leadership on climate action, but has seen rising emissions from coal power stations due to the low CO2 price and cheaper coal imports,” it says. “This is a threat to both Europe’s delivery of domestic decarbonisation and to its international influence.”

Europe has partly adopted the EPS idea already, the text notes, since a recent decision by the European Investment Bank not to fund new power generation projects that emit more 550 grams of CO2 per Kilowatt hour (gCO2/kWh).

The Commission has recommended a level of 450gCO2/kWh – which the UK legislated for in December 2013 – and Brussels will co-review the Bank’s EPS level in 2015.

But the core of the bloc’s emissions-reduction strategy remains the Emissions Trading System (ETS), a cap and trade scheme that puts a price on carbon to incentivise CO2 reductions by the 10,000 or so included installations.

With prices stuck around €5 per tonne of carbon though, the system has proved unable to affect investment decisions. The green coalition argues that Europe’s decarbonisation could be complimented and augmented by added EPS standards.

Such rules would “provide a safeguard that encourages investment flows only to energy resources that can contribute to achieving EU decarbonisation objectives.” their statement says.

Asked by EURACTIV whether the EPS would not merely encourage the outsourcing of US emissions in the form of cheap coal exports, Darek Urbaniak, the energy policy officer at WWF Europe said that the US would likely remain one of the world’s biggest coal suppliers, despite Obama’s new plan.

“The anticipated reduction of coal use domestically in the US (as the outcome of the EPS) will most likely result in a greater surplus of coal on the global market pushing the coal price even lower,” he said. “This cheap coal and associated CO2 emissions may find its way to the EU and other countries set on using coal for power generation if politicians do not react in time and establish the right policies.”

Questions have also been raised by scientists about the accuracy of current accounting for other US greenhouse gas emissions, such as methane, by the country’s shale gas drilling companies, many of whom may not yet comply with EPA guidelines.

Methane is a greenhouse gas at least 25 times more potent than carbon dioxide over a shorter 100-year period, and 72 times greater over 20 years. Scientists believe that it could be a particularly dangerous trigger for global warming feedback loops.

Environmental think tanks though accentuated the plan’s positive aspects.  “With this announcement Obama has clearly attached his political legacy to delivering domestic action on climate change,” said Nick Mabey, the CEO of E3G, another signatory to the green group’s statement. “These regulations are the environmental equivalent of Obamacare and will stir up similar levels of opposition.”

Mabey located Obama’s move within ongoing negotiations for a climate deal at the Paris UNFCCC summit. Many seasoned observers expect some form of reciprocal announcement soon from China.

Christiana Figueres, the UN’s top climate official said that the new power plant regulations had the potential to unlock stalled negotiations ahead of the summit, and were “a good signal to nations everywhere”.

The EU has set itself a legally-binding goal for 2020 of reducing its carbon dioxide emissions by 20% and increasing the share of renewables in the energy mix by the same amount, both measured against 1990 levels.

A target of a 20% increase in energy efficiency has also been set but it is not legally enforceable.

The EU's low carbon roadmap for 2050 goes further, setting a legally-binding target of 80%-95% carbon dioxide emissions reductions by that year, as measured against 1990 levels.