View of the construction site of the Refhyne project near Cologne, Germany. Once built, Refhyne will be the world's largest PEM hydrogen electrolysis plant. [European Union, 2020 Source: EC - Audiovisual Service]

When it published its hydrogen strategy in July this year, the European Commission also kicked off a race to mass-produce electrolysers on the old continent.

By 2030 the EU executive wants at least 40 gigawatts of electrolysers installed in the EU, producing up to 10 million tonnes of renewable hydrogen.

Electrolysers – technologies that produce hydrogen and oxygen by applying an electric current to split water molecules – are an established method for producing “renewable” or “clean” hydrogen, which the Commission sees as a fundamental building bloc to decarbonise the economy.

“The priority for the EU is to develop renewable hydrogen, produced using mainly wind and solar energy,” the strategy says, adding that “the choice for renewable hydrogen builds on European industrial strength in electrolyser production.”

“Europe is highly competitive in clean hydrogen technologies manufacturing and is well positioned to benefit from a global development of clean hydrogen as an energy carrier,” the document continues, saying investments in the sector will also support a green recovery from the COVID-19 crisis.

Based on that conviction, energy Commissioner Kadri Simson traveled to Germany last month to visit the construction site of the largest “proton exchange membrane” (PEM) hydrogen electrolysis plant in the world, Refhyne.

The 10 MW electrolyser, which is funded by the EU through the Fuel Cell Hydrogen Joint Undertaking, a public-private partnership, is expected to be operational in early 2021 and will use renewable electricity to produce about 4 tonnes of clean hydrogen per day or about 1,300 tonnes per year.

“Projects like Refhyne are what we need to scale up clean hydrogen production in Europe – innovative, renewables-based and bringing together the public and private sector to secure EU’s global technological leadership,” Simson said in a statement before her visit.

Electrolyser manufacturing will also be supported by a European “hydrogen alliance” bringing together industry leaders, governments and civil society to “build up an investment pipeline for scaled-up production” and demand for clean hydrogen in the EU. 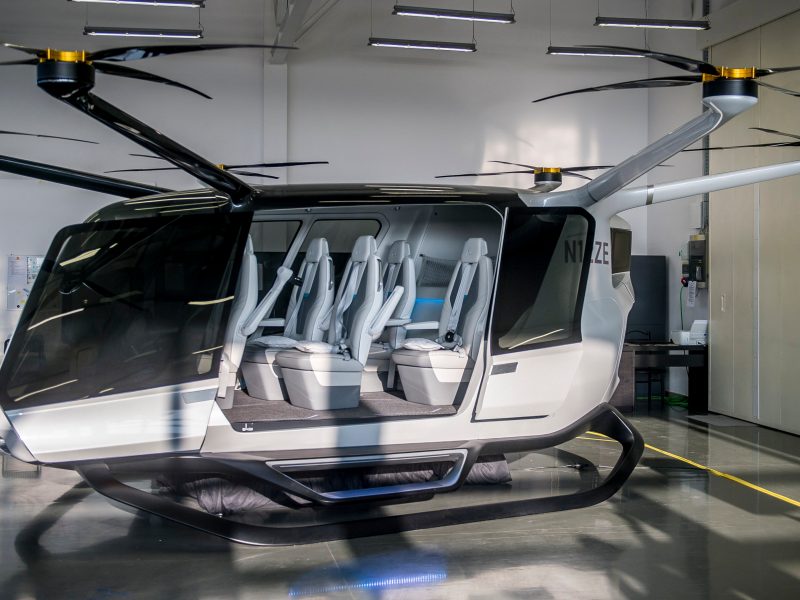 With those initiatives, the EU seems determined to preserve and strengthen its industrial leadership in electrolyser manufacturing. But what is the state of play in the rest of the world?

Today, there are essentially three types of electrolyser technologies: Proton Exchange Membrane (PEM), Alkaline, and Solid Oxide (SO). Although they all “split water” by applying an electric current to it, they use different materials, set-ups and operational temperatures, resulting in individual strengths and weaknesses.

The cheapest and most established electrolyser technology is the alkaline type, which was first developed in the 19th century. According to estimates by BloombergNEF, Chinese manufacturers can sell alkaline electrolysers for 200 USD/kW – or 80% cheaper than European machines of the same type.

This technology is particularly popular in China itself, which represents more than 50% of the world market for alkaline electrolysers, says Michela Bortolotti from Hydrogen Europe, an industry association.

“Because the Chinese market is so large, their producers benefit from economies of scale, automation, etc. to a much larger extent than EU and US ones,” she told EURACTIV in emailed comments.

But European manufacturers have taken the lead on “innovative technologies” such as PEM, Solid Oxide, or pressurised alkaline electrolysers, says Mirela Atanasiu, head of unit at the Fuel Cells and Hydrogen Joint Undertaking (FCH-JU).

Although more expensive, these have their relative advantages. PEM for example, is a much more compact machine than a conventional alkaline electrolyser.

PEM electrolysers are also better suited to operate with renewable energy sources, Atanasiu told EURACTIV in a phone interview. That is because they can operate “dynamically” using varying loads of electricity, allowing PEM electrolysers to be operated when wind and solar energy generation is cheapest.

“The PEM one has this ability of dynamic operation, offering services to the grid,” she said. “This is where we are world leaders”. And that is an important advantage over conventional alkaline technology, she continued. “The alkaline, the way it operates, it takes more time to switch on and off than the PEM. PEM switches easier”.

The ability of electrolysers to deal with varying loads of power is also particularly relevant for the EU, which sees hydrogen as a “key enabler” of energy system integration and cost effective decarbonisation.

With electrolysers that can easily be switched on and off, it becomes possible to develop business models that take advantage of the intermittent nature of renewable energy sources, and use electricity when it’s cheapest, Atanasiu explained. “We should tap into the electricity when it is low-cost. When there is too much electricity in the system, we take it at zero costs – even at negative cost potentially – and we produce hydrogen cheaply.”

The possibility to use cheap electricity is seen as crucial for the competitiveness of hydrogen because the impact of further cost reductions from electrolysers is expected to be limited, Atanasiu said. “And this is what we have tried to do in Europe with the technology: not only producing hydrogen, but producing cheap hydrogen from renewables”.

Indeed, “the cost of electricity is the single most significant factor in the cost of electrolytic hydrogen production”, writes the International Energy Agency (IEA) in their “the future of hydrogen report” published in June last year.

But, production costs are also highly dependent on factors such as electricity taxes, grid fees and the capacity utilisation rates of electrolysers, which “vary widely” per region, the IEA explains.

Indeed, other technologies may be better suited to other policy goals. If producing renewable hydrogen is not a priority, electrolysers can simply be connected to the electricity grid allowing to produce a “steady” load of hydrogen. And that would work just as well with cheaper alkaline technology.

For industrial uses however, neither Alkaline nor PEM might turn out to be the preferred technology. Instead, solid oxide electrolysers – another “innovative technology” that Europe leads on – have potential to conquer that segment, Atanasiu said.

Operating at around 900°C, solid oxide technologies could use excess industrial heat to reduce the amount of electricity needed for the electrolysis process. “Depending on the business model of each industry, they might look at an equipment that will also use high temperature heat and produce a lot of oxygen,” Atanasiu said.

Referring to the number of related patents and publications worldwide, Atanasiu underlined that Europe is a world leader on PEM and solid oxide technologies, but not on conventional alkaline electrolysers.

Total worldwide publications and patents from 1996 to 2019, data provided by the FCH-JU.

A head start for European manufacturers

According to Atanasiu, the main reason for Europe’s head start on “innovative” electrolysers is that under the FCH-JU, the industry focus shifted from fuel cell to electrolyser production already six years ago.

“When we started twelve years ago, electrolysers were just 10% of our funding,” Atanasiu recalls, saying “fuel cells were in the lead” at the time. But that changed when the benefits of producing hydrogen from renewable electricity became apparent, Atanasiu said. “Then we started looking at electrolysers more.”

A lot of companies with knowledge in PEM and solid oxide technology then used their knowledge about fuel cells to produce electrolysers – because electrolysis essentially is the reverse way of operating a fuel cell.

“We thought why not having electrolysers with these materials instead of the old and known alkaline, because this will perform better,” Atanasiu explained. “And that was the switch that Europe made well in advance of the other regions in the world.”

The German government should support the establishment of an EU-wide framework for green hydrogen to keep electrolysis manufacturing competitive, write Matthias Deutsch and Andreas Graf.

Matthias Deutsch is a senior associate at Agora Energiewende, a German think …

But even if the most innovative electrolysers are produced in Europe, big amounts of green hydrogen can only be produced if there is sufficient renewable electricity available.

Today, only 32% of electricity consumption in the EU is renewable, which opens up a debate about whether Europe should start importing green hydrogen from countries where renewable electricity can be produced cheaply and abundantly.

This is why industry association Hydrogen Europe proposed to build 40 GW of electrolysers inside the EU and import the same amount from Europe’s neighbourhood, in its so-called “2×40 GW initiative”.

The oil and gas industry, meanwhile, argues that hydrogen production should first be ramped up rapidly in order to create an EU-wide market for hydrogen. This, it says, can be done now using natural gas as a feedstock, and coupled with carbon capture and storage (CCS) technology to ensure the hydrogen is carbon-free.

A recent study by Eurogas, an industry association, found that the EU can save €4.1 trillion by 2050 “by using a mix of energy carriers to achieve carbon neutrality” – including decarbonised fossil gases.

“The Eurogas study shows that to achieve carbon neutrality by 2050, Europe must start the hydrogen economy now. There is no time for delay,” said James Watson, secretary-general of Eurogas, in a statement accompanying the study.

“This includes all clean hydrogen options: reforming natural gas through CCS, producing hydrogen from renewables, as well as blending it with methane. The need for CCS is not an option, it is a necessity – if we are to reach our climate ambitions.”

Opponents of fossil-based hydrogen warn about the risk of a lock-in effect of investments in technologies that keep fossil fuels part of the energy system.