At the summit, Europeans will also push Beijing to peak its global warming emissions by 2025 and commit to stop all investments in new coal-fired power stations, whether at home or abroad, EU officials said.

The climate talks are part of a wider bilateral trade and investment agenda that Brussels hopes will help restore a level playing field between EU companies and state-owned Chinese firms that are not subject to the same CO2 emission obligations.

“On Monday, we hope to agree on a detailed roadmap in order to close negotiations by the end of this year as we set out to do,” said an EU official who was briefing reporters on Friday (11 September).

The online summit will be attended by European Commission President Ursula von der Leyen and Council chief Charles Michel on the EU side, as well as Chinese President Xi Jinping on the Chinese side.

After the last EU-China summit in June, von der Leyen made clear that the ball was “way in the Chinese court” when it comes to reciprocity in trade relations, an EU source said.

The list of EU recriminations is long and includes a request for fair access to the Chinese market, as well as an end to forced technology transfers imposed on European firms operating in China.

On the climate diplomacy front, the EU has committed to reducing global warming emissions to net-zero by 2050 as part of the Paris Agreement and is now asking Beijing to play its part by committing to a similar objective.

“We hope that they will commit to climate neutrality domestically by 2060,” a senior EU official said, adding that Europe was “extremely prudent” about the commitments China has made so far on climate change and will ask concrete measures rather than just talk.

“China has committed to peak its emissions by 2030,” a senior EU official remarked. “We think it’s far too late, we suggest 2025.”

Failing to do so would eventually push the EU side to impose punitive carbon tariffs on Chinese firms in order to restore a level playing field with European companies, which will face ever-stricter emission standards in the coming years because of the bloc’s increased level of ambition, EU officials explained.

“We’ve already had this discussion with our Chinese friends” as well as other nations, the official said in reference to the EU’s planned border adjustment mechanism, or carbon border tax.

Although there is no decision yet on the shape or features of the tax, the official said that “some parameters” were already clear: first, the Commission “will make a proposal” and “it will be aimed at putting imported products on the same level as domestic products” with a view to restoring fair competition between EU and foreign manufacturers.

But officials were also quick to add that Europe did not have any “red lines” on environmental issues at this stage and was ready to assist China in reducing its emissions.

“It’s not a classical negotiation where you have red lines that you cannot accept,” one official explained. Rather, “we’re looking for cooperation, we’re hoping to bring the Chinese government on board,” the official said, portraying climate talks as one of the positive chapters of EU-China relations.

“China is a good ally on climate change” and was “instrumental” in getting the Paris Agreement over the line, another senior EU source pointed out. At the same time, China is “by far the largest emitter in the world” and has an economy that is highly inefficient, the official added, pointing to areas like energy savings where the Chinese could benefit from EU technology and experience.

In Europe, the carbon trading system has had “a very strong impact on the energy efficiency of European industry over the past 15 years and our Chinese counterparts are listening very carefully on that one,” the official said, pointing to potential areas of cooperation.

“Europe is small” and cannot tackle climate change single-handedly unless it partners with other nations, another official remarked. 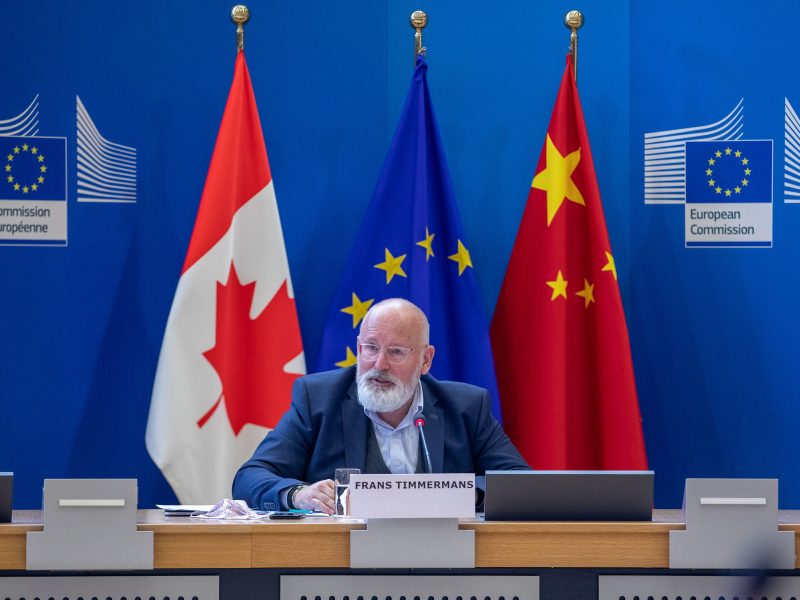