The main advantage of tidal and wave energy is that they can help stabilise the electricity system, because they don't suffer the same kind of variability than solar and wind, says Francesco la Camera, director-general of the International Renewable Energy Agency (IRENA), based in Abu Dhabi. [Jim Barton / Flickr]

The Commission had initially aimed to publish its strategy in mid-October but this has now been pushed back until “later in the year,” EURACTIV understands.

However, the roadmap accompanying the Commission’s public consultation, which closed on Thursday (24 September), leaves little doubt about its intentions: the EU executive wants to leverage “the huge potential of offshore renewable energy deployment” in the North Sea,  the Baltic Sea, the Black Sea, the Mediterranean as well as the Atlantic Ocean.

But while “a massive scale-up of offshore wind in Europe” is a central aim, the European Commission also envisions a significant role for “emerging technologies” including tidal and wave.

That is music to the ears of the ocean energy sector, which is redoubling efforts to bring their technologies closer to large-scale commercial maturity.

“For us, this strategy is really important because it is the opportunity to push these technologies from infancy, if you look at wave, and to commercial development, if you look at tidal,” said Rémi Gruet, CEO Ocean Energy Europe, an industry association.

Tidal technologies – which are very much like underwater wind turbines – could reach commercialisation first, with some pilot farms already completed, he told EURACTIV in a phone interview.

Wave technologies are expected to follow later, as various prototypes are currently being tested and validated in real sea conditions. These range from buoy-like technologies that follow the motion of waves to pull an underwater rope that generates electricity, to gigantic floating structures that use the water to push air through a top-mounted turbine.

Accelerating the development of these technologies would be beneficial for the European energy system as a whole explained Francesco la Camera, director-general of the International Renewable Energy Agency (IRENA), based in Abu Dhabi.

“Their main advantage over wind and solar is that they can help stabilise the electricity system because they don’t suffer the same kind of variability than solar and wind,” he told EURACTIV. “So, they could offer a way to balance the grid and give flexibility to the energy system, much like hydroelectric dams.”

Tides are indeed highly predictable because they depend on the relative position of the moon, the sun and the earth. Waves, for their part, are created by the wind which is intermittent.

Yes indeed, Gruet replies, but that doesn’t make them as variable. “When the wind starts to blow, wind turbines start to turn pretty immediately, but the wave devices don’t start immediately because it takes a bit of time for the waves to build up,” he explained.

“Once the wind stops, obviously the wind turbines will stop immediately, but the wave devices won’t, because the waves will have accumulated enough energy for another 2-3 hours after the wind has stopped,” he said.

Beyond the energy system, the European economy also would benefit from the accelerated commercialisation of tidal and wave technologies, Gruet believes.

“If the strategy contains good actions and good objectives, we have a very good chance of replicating what Europe has done with onshore and offshore wind – basically creating a new sector, that is based in Europe that is dominating the global markets,” he said.

“We have a technological advantage in ocean energy, and we could develop something very similar, provided we start now and we don’t wait for the competition to wake up,” Gruet added.

“I can understand why the European Commission is paying attention to the sector,” he told EURACTIV. “European countries hold around 23% of all ocean energy patents globally,” he pointed out.

But that would require an entirely new approach to Europe’s global industrial strategy, in which intra-European competition is no longer sanctified at the expense of global leadership, Gruet argues.

“For now, we need to forget about intra-European competition and look at Europe as a whole,” he said. “We should say, look, we have a product or a technology that is European where a number of member states have an interest in and that we can export across the world.”

Ocean Energy Europe therefore calls on the Commission to establish an “ocean energy alliance” bringing together EU member states, the Commission and industry, much like the alliances that have been created to support battery and hydrogen technologies.

Such an alliance would give market visibility to investors, Gruet explained, preferably backed with targets for installed capacity, which he suggests putting at 100 MW by 2025.

On top of that, the Commission should allow early-stage technologies and pilot farms to “blend” different forms of financial support, he suggests.

“We need the Commission to put funding on the table that can address the challenge of pilot farms and early-stage technologies,” Gruet said. “That’s why we’re asking for the possibility to blend financial instruments – grants, equity and debt at low rates – to enable projects to happen.”

By contrast, the offshore wind industry is not concerned about securing investments.

“The technology is already cheap, so there will be investors,” said Christoph Zipf of WindEurope, an industry association.

Instead, WindEurope calls for European action on spatial planning, arguing space should be made available in line with the continent’s climate ambitions.

“The European Commission calculated that if Europe wants to reach the 1.5 °C scenario, by 2050 it needs to have 450 GW of offshore wind capacity installed,” Zipf told EURACTIV in a phone interview.

“That is 20 times today’s installed capacity,” he added. “If you want to achieve that, you will have to find space to put all those windmills,” and “emerging” technologies like floating wind are expected to crowd the landscape further in the future.

But that doesn’t mean offshore wind developers will compete for the same space as tidal and wave developers, Gruet said.

Wave resources coincide more with favourable locations for wind farms, but that should not be a problem, he explained.

“Between one offshore turbine and another, you have about one kilometre at the moment. The advantage of wave devices is that they are smaller than that,” he said. “So you could put wave devices in between wind turbines if you wanted to.”

But Europe’s maritime territory is far from being empty. On top of natural ecosystems which need to be preserved, the continent’s oceans and seas are used for defence, shipping, fishery, sailing and tourism purposes, the Commission’s roadmap explains. And that requires careful consideration.

“The strategy will propose ways to ensure the scale-up in offshore energy can occur in a way that is sustainable, fair and respectful to other sea space users and natural capital, while considering the specific space constraints of each sea basin,” the Commission writes.

On top of spatial constraints, offshore wind farm development is currently hindered by the large amount of differences between national rules and procedures, Zipf explained.

“Currently, each country has its own regulatory regime to develop offshore wind, their own development plans, support mechanisms, timing and process for tendering and auctioning power capacity, maritime spatial planning, grid development plans, technical and environmental standards and assessment methods, and term of recourse,” WindEurope explains in its position paper.

“This patchwork of regulations stifles offshore wind development. To create a world-leading industry, more harmonisation and regulatory alignment is needed,” it adds.

Another important issue that WindEurope hopes the strategy will address is what Zipf calls “grid planning”, which is related to where cables come to land and how they distribute the energy further.

With increasingly large capacities installed, it might no longer be possible to feed all that energy into existing grid entry points, he explained. And that challenge could be alleviated through international collaboration.

German offshore wind farms, for example, are sometimes closer to Denmark than to Germany. “So it would make sense to also put a cable to Denmark,” Zipf said.

In such situations, harmonised rules are all the more important, he added.

“If the same wind farm is exporting electricity to two different countries, the rules on for instance permitting, feed-in tariffs and tenders need to be similar,” he said.

The Commission’s roadmap predicts good news for the offshore wind sector in that regard, saying that “coordinated planning of cross-border offshore electricity grids development and onshore landing-points will be essential” in the upcoming strategy. 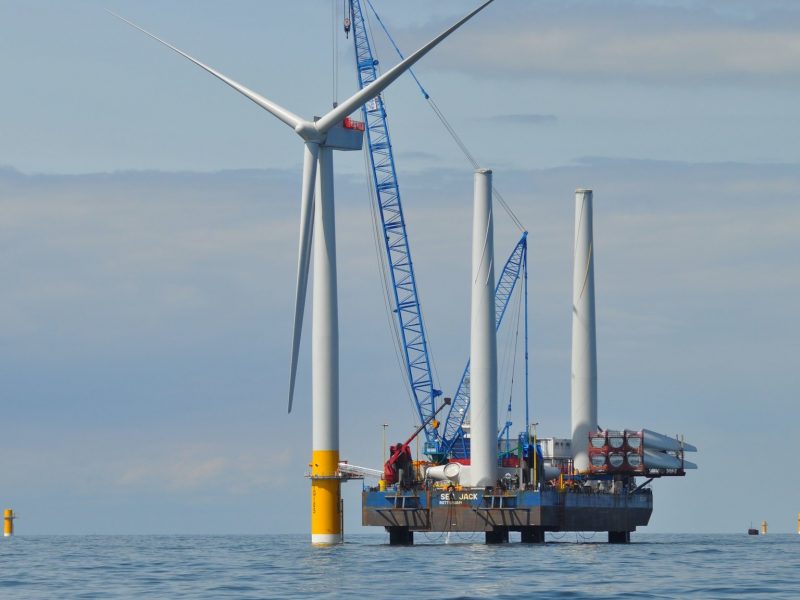