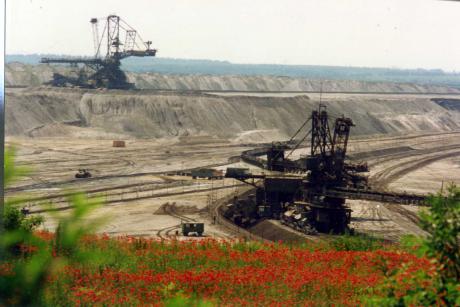 In the debate over the future of coal, Economic Affairs Minister Sigmar Gabriel is under considerable pressure from unions and workers councils, who fear his planned climate fee will cut thousands of jobs. EURACTIV Germany reports.

Last weekend, around 15,000 miners and power plant workers protested against Gabriel’s plans for a climate fee, heeding calls to oppose the measure from the Industrial Mining, Chemistry and Energy Union (IG BCE) and the labour rights organisation Verdi.

Aside from critics in the centre-right Christian Democratic Union (CDU) and the liberal Free Democrats (FDP), the number of opponents in Germany’s Social Democratic Party (SPD) is also growing.

The biggest fear among critics is that tens of thousands of jobs would be lost in the lignite-burning centres Brandenburg, Saxony, Lower Saxony and the Rhineland.

But a new study takes the region of Lausitz as an example, where the energy giant Vattenfall plans to abandon the coal sector. Here, the results partially cancel out the arguments among opponents.

Thousands of jobs in renewables

By 2030, thousands of Lausitz’s lignite-related jobs could be replaced by the renewables sector, according to a study conducted by Greenpeace on behalf of the Institute for Ecological Economic Research.

This could be made possible by offering reeducation, the NGO said, indicating significant potential in Brandenburg and Saxony.

Of the around 8,000 people who currently work in the Lausitz lignite industry, a large portion of the employees could be incrementally shifted to the renewables sector over the next few decades, the study indicated.

The number of jobs in Germany’s second-largest lignite site is expected to recede in a few years anyway, Greenpeace pointed out, decreasing by half until 2030. And the study indicated It is safe to assume lignite will continue to fall because of the climate protection targets.

Gabriel hopes to improve the fee

In the meantime, Gabriel indicated a willingness to accommodate critics somewhat by improving his plans for the climate protection fee.

In order to still reach the 2020 goal of reducing CO2 by 40%, the Economic Affairs Minister hopes to require old power plants to pay a fine if they are older than 20 years and exceed a certain emissions threshold.

But lately, more and more criticism is coming from the SPD as well. The party’s regional chairman from Lower Saxony, Katrin Budde, called on Gabriel to retract the lignite fee.

“We will not allow thousands of jobs to be shredded so that the government’s climate policy can be patched up,” Budde told the newspaper Bild am Sonntag.

The climate fee will result in a large number of lignite plants being taken off the grid, the SPD politician pointed out. This is not what an organised structural change looks like, he said.

In light of the discussion among opponents of the measure, NABU’s president Olaf Tschimpke warned against “exaggerated numbers and stirring up fears of existence”. The numbers the IG BCE and Verdi are citing with regard to job losses are not scientifically sound, he said.

“The proposal from Sigmar Gabriel initiates a fair and moderate structural change.” And a responsible policy means making the connection between climate protection and labour market policy, Tschimpke said, and prepping certain locations for the transition after coal.