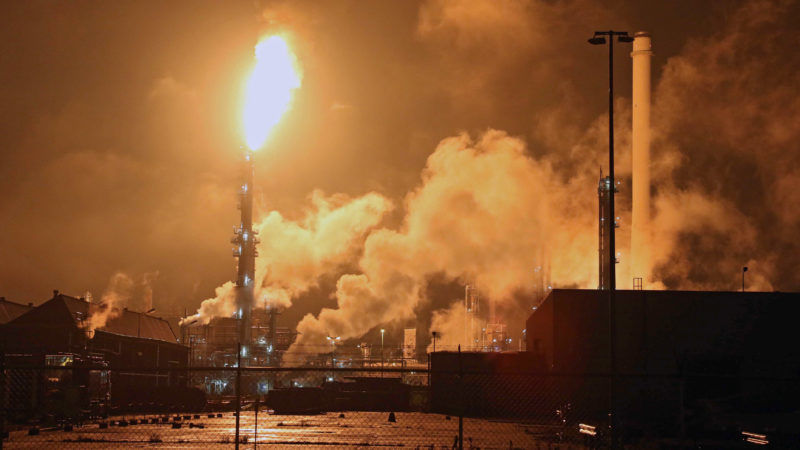 Flames burst as gases are flared out at the Shell refinery Pernis at the Vondelingenplaat in Rotterdam, The Netherlands, 29 July 2017. [EPA/Media TV]

Europe is set to take a record of more than 2 million tonnes of US diesel in August after a string of refinery woes pulled in cargoes that have for months been diverted elsewhere, Reuters reported, quoting trading and shipping sources.

Refinery fires and falling stocks – including the closure of the largest European plant, the 404,000 barrel per day (bpd) Pernis refinery in the Netherlands – have made Europe a target destination for US exports, which hit their own record above 1.6 million bpd in July.

Royal Dutch Shell said it is aiming to restart most units at its Rotterdam-based Pernis refinery by the end of this month. The refinery was shut down following a fire in a power unit and a subsequent hydrogen fluoride leak.

The shutdown of the refinery in late July has contributed to a tighter fuel market in the Amsterdam-Rotterdam-Antwerp area. Fuel prices in both Europe and the US jumped at the end of last month when the fire forced Shell to halt most of the plant’s units.

Traders directed extra cargoes from other parts of the world in anticipation of a supply shortfall in northwest Europe. The difference between diesel and crude declined immediately after the planned restart became known, a sign of a weaker market.

The difficult life of the EU refinery business is no news. State-of-the-art new refineries in Asia and the Middle East have sharply increased the amount of oil products flowing into global markets and threaten the existence of Europe’s ageing and less sophisticated units.

But more importantly, stringent EU environmental regulations pose a challenge to refineries in the region, as delegates at an EU refining forum in Brussels stressed last February.

As an example, the very strict environmental regulations in Spain resulted in the idling of Cepsa’s Tenerife refinery three years ago, and the plant is unlikely to restart. The EU regulations are reportedly adding a $2 per barrel for Cepsa’s two operating refineries in Spain, which is seen as a heavy burden needed to comply with the regulations.

Conversely, CEPSA is under fire from activists, politicians and the local population for paying little respect to the protection of the environment.

Repsol’s director of technology and sustainability Martin Juez said the EU legislation has reduced the competitiveness of the refining sector by 25%.

ExxonMobil has also complained of the EU regulations and called for transparent and predictable EU energy policy.

Robert Campbell, head of oil products analysis with Energy Aspects consultancy, said that with the outage at Pernis, there has been a strong demand for supply from outside the continent.

Record-breaking US refinery runs have led to bumper exports. With open arbitrage, BP booked distillate cargoes to sail east from the US East Coast, sources said.

The United States is a vital source of ultra-low sulphur diesel for Europe, which does not produce enough to meet demand.

In 2015, Europe’s monthly US diesel take exceeded 1.5 million tonnes several times, according to data from the US Energy Information Administration (EIA). The data showed those cargoes peaked last year at 1.74 million tonnes.

While Pernis is now restarting, Greece’s 100,000 bpd Elefsina refinery is still closed after an unplanned issue forced it to shut down in July and declare force majeure on diesel exports.

“It should be a record,” one trader said of the expected shipments.

“Turnarounds in September and October mean we need it.”