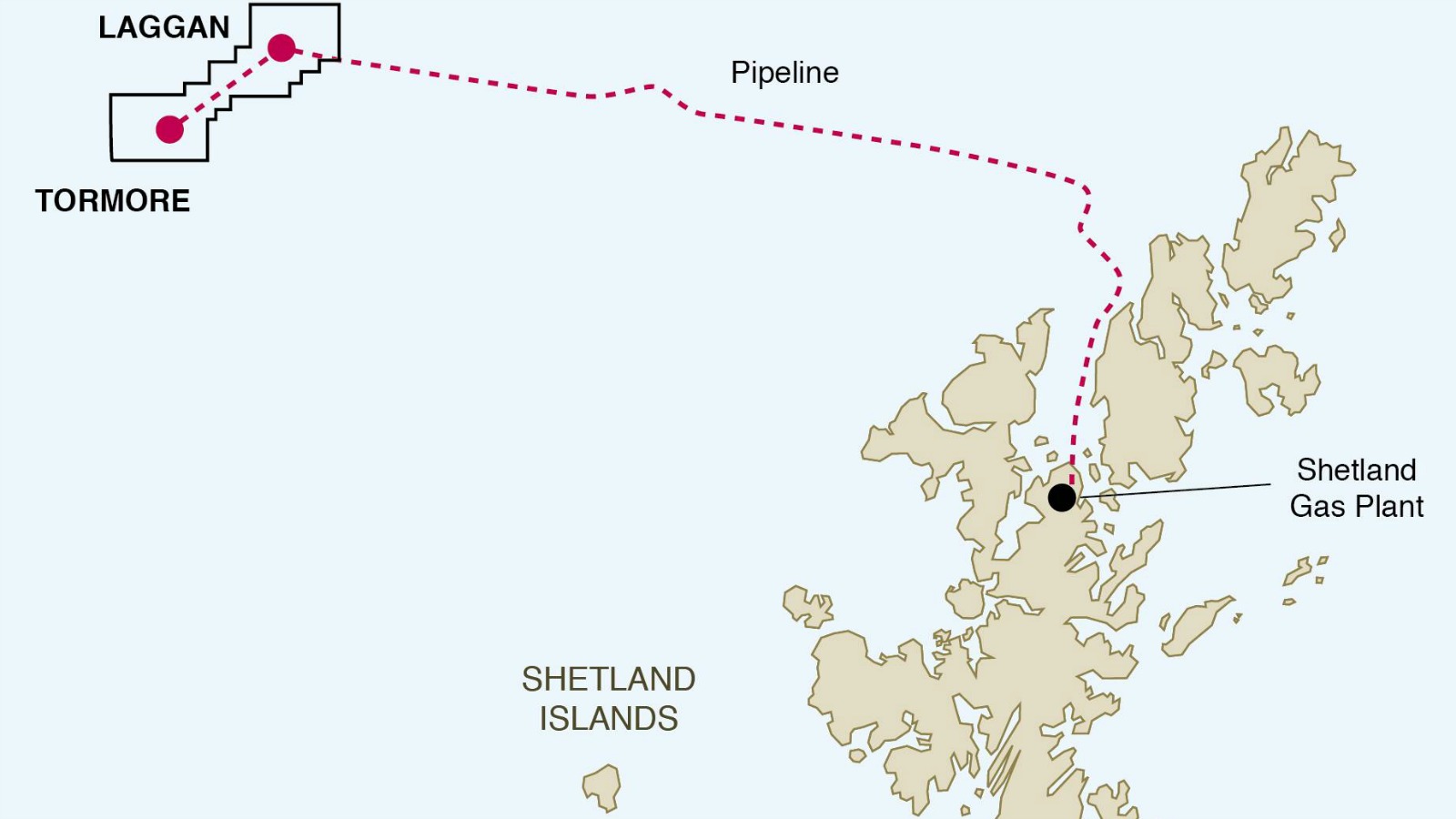 The Laggan-Tormore fields and the Shetland islands. [Total]

France’s Total officially launched a mammoth new gas project in Britain’s remote Shetland Islands yesterday (16 May), hailed by London as a “vote of confidence” in the flagging North Sea oil and gas industry.

The plant began processing gas from the Laggan-Tormore fields on 7 February. Production has since been ramped up to its full capacity of 500,000 cubic feet of gas (14,000 cubic metres, 90,000 barrels of oil equivalent) per day.

The fields are expected to last for about 20 years.

The Scottish North Sea oil and gas sector has been reeling from a plunge in oil prices since mid-2014, leading the British government to cut taxes for the industry.

Amber Rudd, the minister in charge of energy and climate change, called the opening of the Shetland project a “vote of confidence in the offshore oil and gas industry”.

“North Sea oil and gas is crucial to our energy mix.

“We are 100 percent committed to helping our oil and gas industry attract investment, unlock new potential and remain competitive.”

The Laggan-Tormore fields lie around 80 miles (125 kilometres) northwest of Shetland.

The development should provide eight percent of Britain’s daily gas requirements and opens the potential for further developments in the area.

During his speech inaugurating the plant, Total chief executive Patrick Pouyanne said Total had invested £7.5 billion in Britain over the past five years and now provides a third of UK gas.

“We want to grow, we want to develop. We don’t want to stick on our balance sheet, ‘taking care’,” he said.

“One of the objectives of Total is to become in 20 years one of the most responsible energy majors which means to develop an aggressive strategy on gas and also to invest in renewables.”

Total decided to invest in Shetland before the gas price crash.

“Your job is to get the most of the assets that you have invested,” he said.

“To lower your costs of production is the best way to generate costs and results.”

Alex Kemp, a petroleum economics professor at Aberdeen University, told AFP the new pipeline between the Laggan-Tormore fields and Shetland could be used for other future projects.

“This year will continue to be quite tough for the oil and gas industry in the North Sea as brand new projects are not really viable in the current price environment,” he said.

“However, by next year, some projects which have recently been put on hold could be looked at again.”

Laggan-Tormore is operated by Total with junior partners Denmark-headquartered DONG Energy and British energy company SSE, which each have a 20% interest.

The gas is treated at the Shetland plant before the processed gas is piped into Britain’s main grid. The islands are around 105 miles (165 kilometres) northeast of the Scottish mainland.

Total claimed the plant was Britain’s biggest construction project since the London 2012 Olympics, employing 2,500 people at the peak of construction.

On the possibility of Britain voting to leave the European Union in the June 23 referendum, Pouyanne said it would have “no impact” but would be “strange to us to see”.

Saying imposing trade barriers was “not a good idea”, he said “I can only hope that the Great Britain remains in Europe”.

Meanwhile British energy giant BP announced Monday it had doubled its interest in the Culzean gas development in the central North Sea, following its acquisition of a 16% stake from JX Nippon.

The purchase increases BP’s interest in the development to 32%.

The Maersk-operated Culzean field development, which was sanctioned in August, is expected to produce enough gas to meet five percent of total British demand at peak production in 2020-2021.