A sailing boat transits in front of the Offshore-Windpark Nordergruende, an offshore wind farm in the North Sea, Germany. [EPA-EFE/KARSTEN KLAMA]

In 2013, the Orkney Islands became a victim of their own success. The windy islands at the Northeast corner of Scotland had been generating wind energy with large wind turbines for several years, and had finally reached a point where they could generate all their own electricity.

But by 2013, they realised the turbines were generating more energy than the islands needed, and the power grid connection to the mainland was too weak to send it elsewhere. That meant that both the large community turbines had to be shut off at times of peak wind. The islanders had to think of a way to use the excess energy so they could keep the turbines running.

Eventually they found a solution: hydrogen. They started the BIG HIT project to produce hydrogen gas with the excess energy produced by the wind turbines. Before long, not only were they able to leave the windmills on during peak supply, they were also able to extend the windmill’s benefits beyond electricity, powering vehicles and heating homes.

“Like many islands, Orkney has had challenges with energy,” says Nigel Holmes, manager of the BIG HIT project with the Scottish Hydrogen and Fuel Cell Association. “They’ve had to import energy as liquid fuels – liquid propane gas, petrol, diesel, and heating oil. That means the cost of fuels on Orkney is higher than on the mainland, and cash is flowing out of the local economy.”

Now, hydrogen is heating community buildings and powering vans on the island. 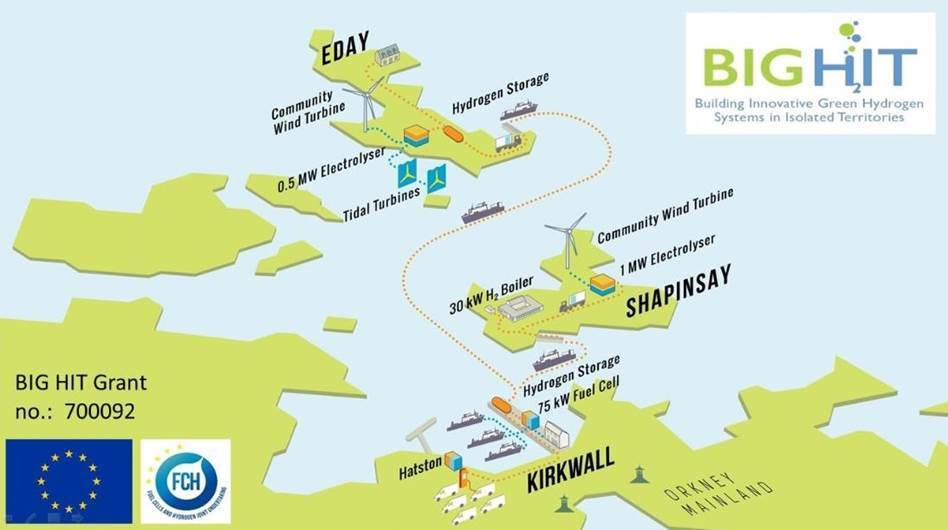 But there have been challenges along the way. One of the trickiest aspects is that the supply has to almost exactly match the demand. Everything has to exist in an integrated “hydrogen economy” where the production, transportation and utilisation of energy is all managed as one.

“What we have to achieve here is that when we start to produce hydrogen, we have to not only think about production, but also demand. Because if we don’t have them matched then we either won’t be producing enough hydrogen or we won’t be actually using the hydrogen to its full extent. Once you get to a certain level, it gets easier. You can add a few houses or vans and it will be fine. But at the start you have to think very carefully about the different uses.”

Another issue has been how to store the energy. The hydrogen is generated at two locations, one on Shapinsay island and the other on Eday island. The energy can be produced in different places and moved onto trailers that move a quarter of a tonne of hydrogen at a time. These trailers can also serve as a batteries, and new fuel cell battery technology means they can store far more than traditional lithium ion batteries. Fuel cell battery technology has been crucial to making the BIG HIT project work.

BIG Hit is one of a number of early demonstration projects for the concept of “hydrogen islands” – communities that can become energy independent through the use of hydrogen gas. They are receiving funding from the European Commission’s Fuel Cells and Hydrogen Joint Undertaking, a public-private partnership supporting research, technological development and demonstration activities in fuel cell and hydrogen energy technologies in Europe. And their early learning experiences are being fed to other projects which are receiving funding from the FCH JU.

“This is very much a two-way street,” says Holmes. “We have benefitted massively from having the support from FCH JU to allow the project to go ahead. But the learning from the BIG HIT project is feeding back in to other FCH JU projects. The best example of that is the announcement earlier this year of HEAVENN project in the Northern Netherlands.”

That project, in the area of the Dutch city of Groningen, is a “hydrogen valley” rather than a hydrogen island – because it’s not completely separated from the grid. It is the first project to receive specific FCH JU funding reserved for such valleys.

A “hydrogen valley” is a geographical area where several hydrogen applications are combined into an integrated ecosystem that covers the entire value chain: production, storage, distribution and final use. They make particular sense in industrial areas which both produce and consume large amounts of energy in a small amount of space.

The HEAVENN project, which stands for H2 Energy Applications in Valley Environments for Northern Netherlands, is being undertaken by 31 public and private entities from six European countries. The project comprises four clusters, and will be completed by the end of 2025. The large amount of wind energy generated offshore in the North Sea will be connected to storage and infrastructure, turned into heat and power for residential and industrial areas, and powering transport vehicles. 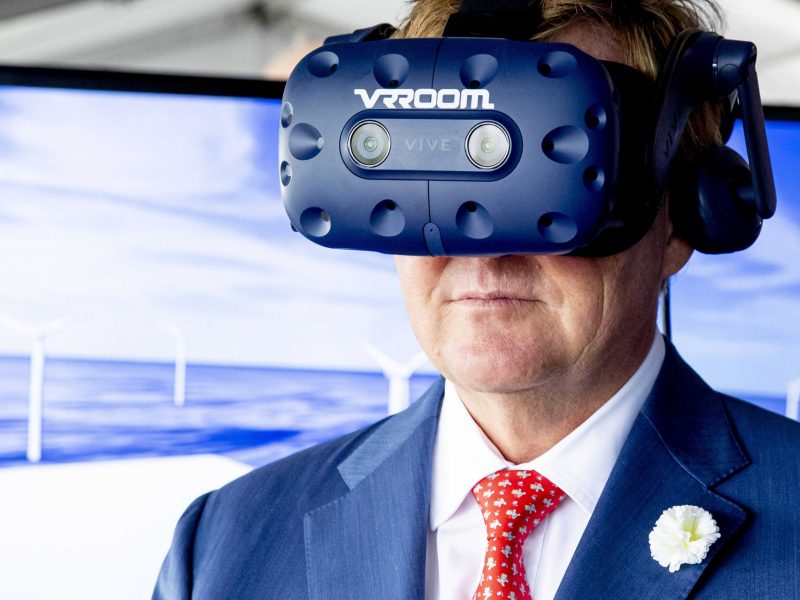 Several other hydrogen economy projects are under development. In Germany, the government is looking for six regions or municipalities to select for a their “hyland” pilot projects. In France, a first “zero–emissions valley” is being developed in the region of Chambéry and Aix-les-Bains.

Although clean sourcing of hydrogen could deliver enormous climate benefits,  by enabling deep emission cuts in heavy industries, campaigners worry that not all the hydrogen for such projects will be generated from renewable energy sources.

Right now, almost all the hydrogen gas in Europe is generated from fossil fuel production. New pipeline infrastructure, therefore, has been greeted with scepticism.

But projects for the integrated use of clean hydrogen in smaller areas has won more universal backing, even if the idea of wide scale deployment of hydrogen is not embraced.

“The hydrogen valley concept is interesting, getting the whole supply chain going in a high industrial area,” says Tara Connolly, an energy campaigner with Friends of the Earth Europe. “They’re trying to create the demand for the hydrogen and then build up the infrastructure all in the same area. Where renewable hydrogen has a value is in hard to decarbonise areas where they do need high temperatures. So maybe some would make sense.”

Holmes says that if the EU wants hydrogen to make an impact in meeting its 2050 decarbonisation goals, then it’s got to get moving on getting this technology deployed on the ground now. “The key thing here is that if we don’t start some of these technologies being deployed in the marketplace now, we’re not going to scale them up quickly enough to achieve the mass rollout in 2020s and 2030s which will give us the carbon reductions,” he says.

“All of this is absolutely doable and should be considered.”