G7 pledges to phase out coal power but without fixing date 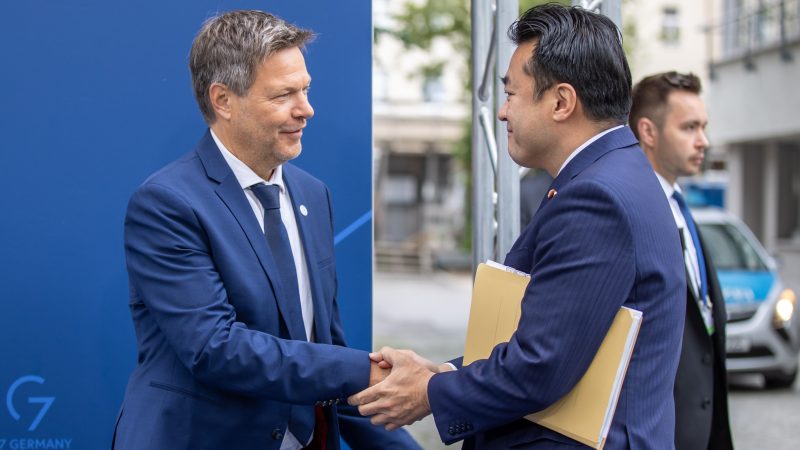 Japanese State Minister of the Environment Toshitaka Ooka (R) is welcomed by German Minister for Economic Affairs and Climate Protection Robert Habeck (L) before the start of the G7 Climate and Energy Ministerial meeting on the situation in Ukraine at the EUREF campus in Berlin, Germany, 26 May 2022. [EPA-EFE/ANDREAS GORA / POOL]

Ministers from the world’s richest democracies agreed on Friday (27 May) to work to phase out coal-powered energy, although they failed to set a date for doing so, and said the energy crunch brought on by Russia-Ukraine war should not derail efforts to fight climate change.

“We further commit to a goal of achieving predominantly decarbonised electricity sectors by 2035 [and to take] concrete and timely steps towards the goal of an eventual phase-out of domestic unabated coal power generation.”

The statement, published at the end of three days of Group of Seven (G7) talks in Berlin, was weaker than a previous draft of the final communiqué, which included a target to end unabated coal power generation by 2030.

Sources familiar with the discussions said Japan and the United States had both indicated they could not support that date.

But the pledge still marked the first commitment from the G7 countries to quit coal-fuelled power. Coal is the most CO2-emitting fossil fuel and use of it needs to plummet if the world is to avoid the worst impacts of climate change.

Green campaigners hailed the pledge as a victory for climate protection.

“The G7 committing to end public finance for fossil fuels and shift it to clean is a massive win,” said Laurie van der Burg from Oil Change International, a green pressure group. “These promises should now urgently be turned into action,” she added, calling on G7 countries to implement the pledge and shift the $33 billion a year invested in fossil fuel finance.

The G7 met against the backdrop of spiralling energy costs and fuel supply worries due to the war in Ukraine. The conflict has triggered a scramble among some countries to buy more non-Russian fossil fuels and burn coal to cut their reliance on Russian supplies.

“Replacing fossil fuels from Russia has dominated the political debate and the actions of the government in the past weeks and months,” German economy minister Robert Habeck said at a news conference.

“But it must be clear to us that the challenges of our political generation, limiting global warming, won’t go away if we just concentrate on the present,” he said. “Time is literally running out.”

The G7 also agreed to largely decarbonise their power sectors by 2035, and to stop public financing for “unabated” fossil fuel projects abroad by the end of this year, except in limited circumstances. “Unabated” refers to power plants that do not use technology to capture their emissions.

The 39-page communiqué made a commitment to a highly decarbonised road sector by 2030, including significantly increasing the sale, share and uptake of zero emission light duty vehicles.

The G7 also aimed to start reporting publicly next year on how the countries are delivering on a past commitment to end “inefficient” fossil fuel subsidies by 2025.

All G7 countries except for Japan had made the finance pledge at the COP26 climate summit last year, and campaigners said it would be a significant shift if Japan – one of the world’s biggest providers of finance for fossil fuel projects abroad – came on board.

Japan provided $10.9 billion for such projects on average per year from 2018 to 2020, with most of that spent on oil and gas, according to analysis by non-profit Oil Change International.

“If Japan implements this commitment with integrity, it will directly shift $11 billion a year from fossil fuels to clean energy and have a much larger indirect impact given Japan’s influence on other financiers in Asia and around the world,” said Susanne Wong, Asia program manager at Oil Change.

“Japan joining this G7 commitment is a significant step forward for people and our planet,” Wong said.

By covering all fossil fuels, including oil and gas, the agreement goes further than a pledge made by G20 countries last year to halt overseas financing for just coal.

The G7 also pledged to take ambitious action against plastic pollution and to increase national efforts to conserve or protect at least 30% of their own coastal and marine areas by 2030.