G7 to discuss gas turbine needed by Germany, blocked in Canada by sanctions 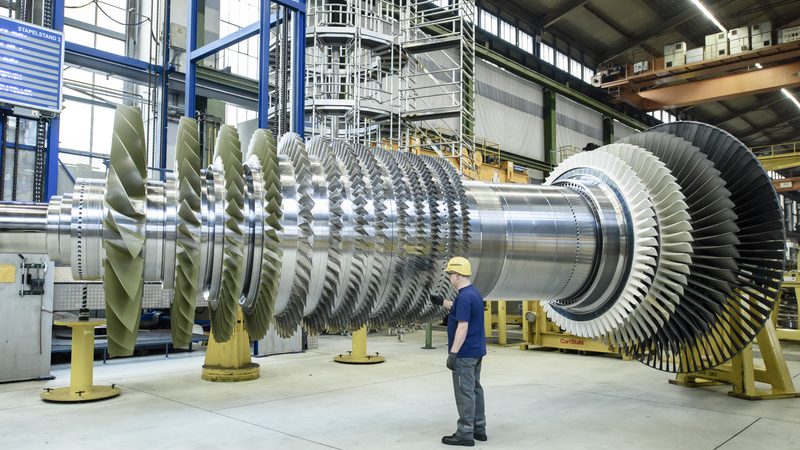 File photo. A worker poses on request of press photographers next to a turbine at the Siemens Gas Turbine Plant in Berlin, Germany, 2 March 2017. [EPA/EFE/CLEMENS BILAN]

The G7 is likely to discuss the fate of a Russian turbine blocked in Canada and blamed for reducing gas supplies to Germany, though the bloc may not reach a solution by the end of the meeting, Canada’s Natural Resources Minister said on Wednesday (22 June).

“If you talk to the Germans, they are very, very concerned about” a decline in gas supplies allegedly caused by the missing turbine, Jonathan Wilkinson told Reuters. “I’m sure it’ll come up at least in the corridors of the G7 … I wouldn’t hold my breath that we’re going to find a resolution before the end.”

The leaders of G7 industrialized countries, which include Canada and Germany, are meeting in Bavaria from Sunday through Tuesday.

Russia’s state-controlled Gazprom has cut the capacity along the Nord Stream 1 pipeline to just 40% of usual levels in recent days, citing the delayed return of equipment being serviced by Germany’s Siemens Energy, in Canada.

Moscow said on Thursday more delays in repairs could lead to suspending all flows, putting a brake on Europe’s race to refill its gas inventories.

Canada, alongside its Western allies, has issued sweeping sanctions on Russia since it invaded Ukraine in February. Russia calls the war a “special military operation.”

“We are trying to be sensitive to the concerns that Germany and others are expressing and trying to find a resolution that will allow us to ensure that we’re respecting the intent of the sanctions, but also ensuring we’re not penalizing our allies,” Wilkinson said, speaking on his way to Question Period in parliament.

In March, the European Union laid out plans to cut its reliance on Russian gas by two-thirds this year and eventually phase it out completely. Moscow has warned that Western sanctions on Russian oil – an idea supported by the United States and already done by Canada – could prompt it to close a major gas pipeline to Europe.

European leaders such as German Chancellor Olaf Scholz have questioned whether the cut in flows is politically motivated rather than a technical issue.

Wilkinson said he did not know for sure if the turbines were the reason for the current reduction in gas supplies, but said the issue should be resolved anyway.

“The reason why these turbines are refurbished here is that they do need to be refurbished. And so at some point, it will have an impact,” he said.