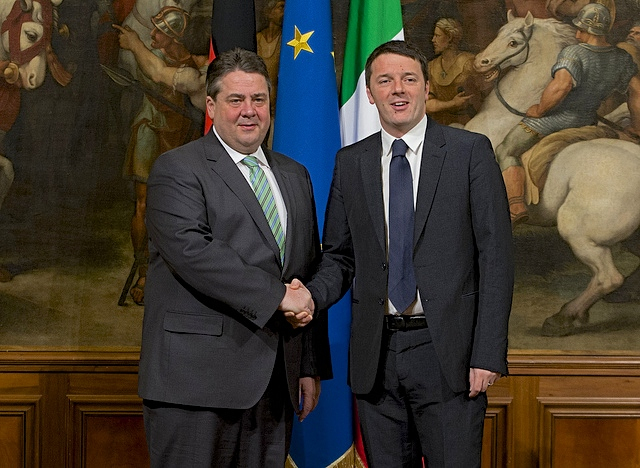 Europe will be remain dependent on Russian gas for years, ministers from the Group of Seven industrial nations said yesterday (6 May), condemning the use of energy as a weapon of political coercion.

“I don’t know anyone in the world who could tell us how Europe’s dependency on importing Russian gas can be changed in the short term,” German Economy and Energy Minister Sigmar Gabriel told reporters.

Meeting in Rome as the crisis in Ukraine intensified, G7 energy ministers said they were “extremely concerned about the energy security implications of developments in Ukraine as a consequence of Russia’s violation of Ukraine’s sovereignty and territorial integrity.”

They promised to improve energy efficiency, develop a broader mix of energy supplies – including liquefied natural gas (LNG), renewables and new gas pipelines – and to invest in strengthening the existing supply network infrastructure.

But there were no immediate alternatives, they admitted. US shale gas was not expected to aid Europe until at least the end of the decade, when it could be imported from tankers as LNG.

Both Italy and France restated their support for the South Stream pipeline project, which will bring gas from Russia into Europe bypassing Ukraine – while also declaring the need to build up alternative channels.

A third of the EU’s gas imports is from Russia, with almost half of that passing through Ukraine, which is in another pricing dispute with Russian gas exporter Gazprom, its third in the past decade.

The final statement from the meeting concentrated on the need to diversify sources of energy and build up gas infrastructure and interconnectivity.

“We are committed to initiate a systemic and enduring step change to improve energy security at national, regional and global levels,” the ministers said.

No decisions were taken on whether or not to toughen the targeted sanctions, which have already been applied against members of the Russian elite.

That will be left to foreign ministers and heads of government.

However US Energy Secretary Ernest Moniz said that if the situation in Ukraine continued to escalate, G7 leaders could “move forward, as they have agreed, in terms of elevating sanctions, particularly, at some point, moving towards sectorial sanctions.”

Tough rhetoric from Britain and the United States contrasted with a greater emphasis on diplomacy from Germany.

British Energy Minister Ed Davey said that Russian President Vladimir Putin had “crossed a line” and that the G7 meeting had taken a “strategic decision that we will face up to the use by Russia of energy as a weapon”.

Germany’s Gabriel said that any solution to the long term problem of energy security in Europe would have to rely on dialogue.

“Pure technical changes in the energy market will not be enough. The process needs to be accompanied by diplomacy and politics and agreement on contracts between partners,” he said.

With political action unlikely to produce any quick solution, countries like Italy, which relies almost completely on imported energy, are looking at widening its supply sources.

In addition to South Stream, Rome has been placing increasing importance on completing the Trans Adriatic Pipeline (TAP) to bring Azeri gas to Italy and is also looking at developing a gas link with the east Mediterranean area.

Italy is also looking to develop at least three more LNG terminals on top of the three it has to take shale gas from North America, but U.S. export terminals will not be ready soon.

“A first project will be ready to start at the end of 2015 while another 6 terminals are planned but won’t be ready till the end of the decade,” U.S. Energy Secretary Moniz said.

“The process however does not determine where the shipments will go,” he added.

0 responses to “G7 wants to end dependence on Russian gas”