Picture dated 09 February 2005 shows an employee at work in the hydrogen plant of the PCK Refinery Ltd in Schwedt, Germany. [EPA/Patrick Pleul]

“We see the European Hydrogen Backbone as a critical piece of the puzzle” to decarbonising energy, the companies write, saying they “fully support the European Green Deal”.

The “backbone” will connect future hydrogen supply and demand centres across Europe, such as industrial clusters, carbon capture and storage locations and large scale renewable electricity production sites, including off-shore wind farms in the North Sea and solar power plants in the South of Europe.

Constructing a hydrogen infrastructure will make it easier to scale up both the production and use of hydrogen, the gas operators say.

“This paper concludes that the cost of such a European Hydrogen Backbone can be very modest compared to the foreseen size of the hydrogen markets. That is why we now propose to launch it as a ‘first mover’, facilitating developments on the supply and demand side,” the group adds.

Once volumes and distances of hydrogen transport increase, pipelines will be an efficient and cost-effective option, the operators explain.

The amount of electricity required for transporting hydrogen over a distance of 1,000 km is comparable to around 2% of the energy content of the transported hydrogen – although that electricity will not necessarily be produced from hydrogen, the report says.

According to a “preliminary estimation” cited in the report, the proposed network should be able to transport more than the expected 1,130 TWh of annual hydrogen demand in Europe by 2040 and cost between €27 and €64 billion.

“These costs are relatively limited in the overall context of the European energy transition and substantially lower than earlier rough estimations,” the report states.

The “modest” price tag of the project is partly due to the assumption that 75% of the network will consist of retrofitted natural gas pipelines – which are gradually expected to become redundant as volumes of natural gas decrease in the future.

The plan comes on the back of the energy system integration and hydrogen strategies presented by the European Commission on 8 July, which mentioned the need to build a dedicated hydrogen pipeline network in the future.

Hydrogen is considered a key enabler to decarbonise industries such as steel and chemicals as well as heavy duty transport. It can also be used as a storage medium, helping to balance the electricity grid during peak demand.

According to the eleven operators, the proposed network will gradually develop over fifteen years, starting from the mid-2020s:

The figure below shows the envisioned network including several dotted lines to mark “possible additional routes”, including import routes from the North Sea (Norway and the UK), Ukraine, Greece, Northern Africa and Russia. 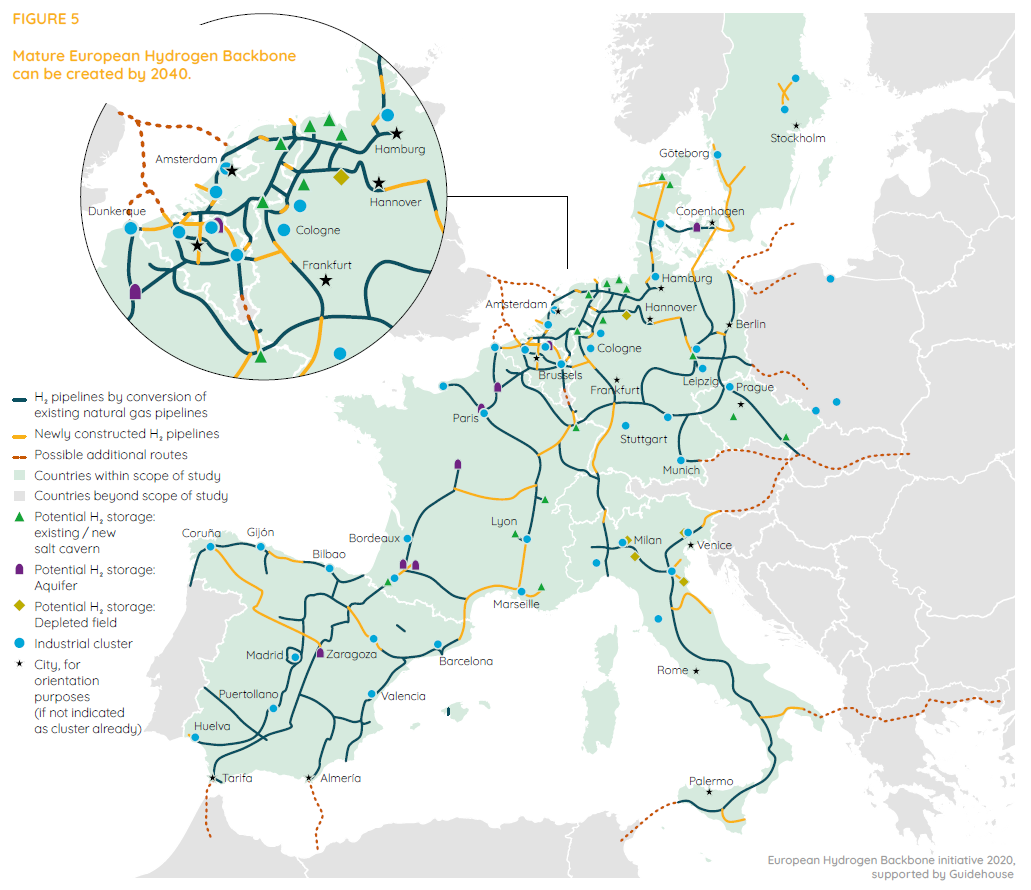 The coverage of the planned network does not indicate a lack of hydrogen ambitions in countries that are not included, the operators explained during an online presentation of the paper.

“The selection of countries doesn’t reflect the hydrogen possibilities or hydrogen timing of any of the countries. It is mainly a function of the group of companies that were already working together to start this initiative,” said Camilla Palladino, executive vice president at Snam, the Italian gas operator.

That doesn’t mean that the absolute amount of pipelines in the ground will double.

By 2040, the natural gas network will be much more limited in capacity – transporting only half of today’s volumes – and a much larger share of that will be biogas instead of natural gas.

Pipelines that were once built to transport natural gas could therefore be freed to transport hydrogen instead.

“Retrofitting is often achieved through conversion of existing pipelines where parallel (“looped”) routes are available,” the paper explains. “This is the case in areas in the Netherlands, Germany, France, Spain, and Italy, where pipeline availability is not constrained by long-term natural gas commitments and capacity contracts.”

According to the grid operators, repurposing pipelines to transport hydrogen is perfectly feasible, although locational differences exist – for instance because of the pressure, dimensions and status of the pipelines that are in place.

A bigger challenge is related to compressor stations which – due to the physical properties of hydrogen – might have to be replaced altogether.

Views vary amongst transmission system operators and compressor manufacturing companies on this point.

All in all, around 60% of the total investment costs will be related to pipeline works, with compression equipment accounting for the remaining 40%.

Transporting a kg of hydrogen is estimated to cost between €0.09-0.17 per 1,000 km, depending mainly on what the compressor costs will turn out to be.

“These values show that pipeline transmission costs only represent a small portion of total hydrogen costs when considering the full value chain from production through to end consumption,” the paper concludes.

The transportation costs cited in the paper include costs for the pipelines, compressor stations, control valves and gas metering stations. Hydrogen storage, distribution pipelines and CO2 infrastructure costs were not included in the calculation.