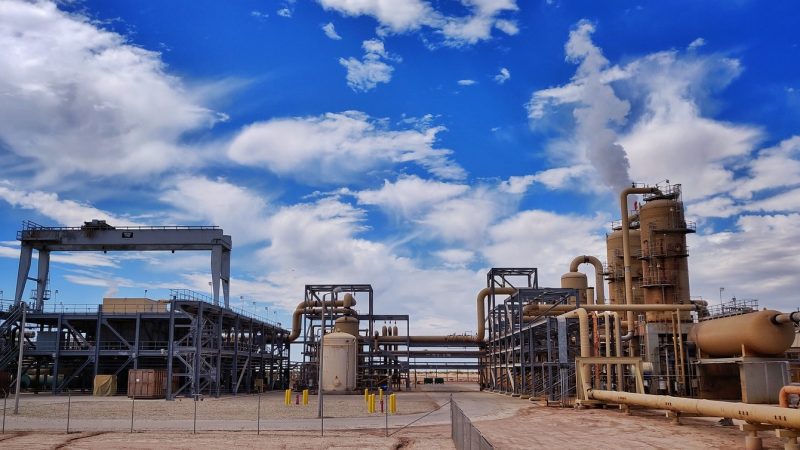 Although geothermal has been used in Europe for thousands of years, America is now the global leader [Stephen D. Strowes / Flickr]

For centuries, ambient heat trapped beneath the ground has been used to warm Europe – from Roman baths to the world’s first district heating system at Chaudes-Aigues in France in the 14th century.

The first industrial geothermal electricity plant opened in Larderello, Italy, in 1904. In 1913, it was producing 250 kilowatts of electricity. Over a hundred years later, in 2016, geothermal energy worldwide produced 75,000 gigawatt-hours per year.

Geothermal is cheap, reliable and renewable, providing heating, electricity production and cooling, but Europe has never fully realised its potential.

In Europe, Italy and Turkey are the largest users of geothermal – alongside France and Germany – and more recently, Eastern European countries like Poland and the Czech Republic, which sit above the Podhale Basin.

Cities across the world use geothermal to heat entire communities, like Reykjavik in Iceland, where 99% of its space heating has been provided by geothermal since the 1930s.

However, the United States, Indonesia and the Philippines have overtaken Italy as geothermal world leaders.

Shallow geothermal covers everything from small plants, which drill up to a kilometre, to small-scale heating systems dug 1 or 2 metres down in gardens to capture the year-round, constant heat trapped in the soil.

These systems are often used in hybrid home installations, coupled with gas or oil-fuelled boilers. Shallow geothermal is also used to heat larger buildings like the European Parliament or the Bundestag in Germany.

Deep geothermal, by contrast, has so far been limited to areas with tectonic activity, like Italy, America and Indonesia.

Put simply, deep geothermal increases the availability of geothermal energy because the drills go deeper to where the Earth is hotter and the amount of energy available increases by around 30°C per kilometre.

Drilling technology has improved dramatically over the past decade, allowing deep geothermal to build on the innovations of the oil and gas industry without the risk of earthquakes caused by fracking.

Innovations like horizontal drilling and magnetic ranging make drilling easier and cheaper. It also allows workers in oil and gas industries to transfer into renewables without much retraining.

“This gives them this window where the very skills they’ve honed in oil & gas…can potentially be redeployed on this,” said John Redfern, the CEO of Eavor, a geothermal company based in Canada who spoke to Recharge, a trade publication.

“It would be as pretty damn close to the holy grail as you can get… if it can be done at an affordable price,” said Michael Liebreich, the founder of Bloomberg New Energy Finance, who is chairman of Eavor’s advisory board.

However, there are several barriers facing geothermal technology.

Geothermal straddles the convoluted markets of electricity, heating and cooling with a relatively cheap product, which makes it hard to recover high installation costs.

The biggest challenge is the geological mapping required to find the right heat flows and avoid fossil reserves. Hiring the drill also doesn’t come cheap. Between 40 and 70% of the cost of big geothermal projects is spent on hiring, shipping and using the drill.

Alongside that, there are long permitting processes, meaning it usually takes between five and seven years to get administrative approval to explore and drill a site.

The upfront cost of geothermal plants is even harder to overcome because of continued subsidies to support gas infrastructure at EU and national level.

In order to make geothermal heat more competitive, companies in the sector are calling for heat grids to be supported at European level, similar to what is currently done for the electricity or gas grid.

“The EU talks tough on decarbonisation and 2050 net neutrality, but a crucial part of the EU’s function is to complete an Internal Market for gas, which basically means that they are mission-driven to increase consumption of gas,” Kumar said.

The European Commission, for its part, believes geothermal could help Europe reach the EU’s renewable energy target of 32% of consumption by 2030. But unlike wind and solar power, measures to support geothermal remain vague.

The reason for the Commission’s cautiousness about geothermal mainly comes to drilling: issues have been raised in the past about emissions released from underground gas reserves during the drilling phase. Risk of water contamination is another source of worry.

But Kumar put this down to one incident in Italy where they drilled into a volcanic region by accident. According to him, 3D modelling can now easily prevent this.

Other than that, potential environmental hazards are few. The carbon footprint of geothermal is low and even negligible for small installations. The biggest carbon impact is caused by the drill, which has to be transported to sites and is usually runs on diesel, although electric drills are now also being designed.

Despite these apparent wins, geothermal remains for the time being ostracised from European energy markets.