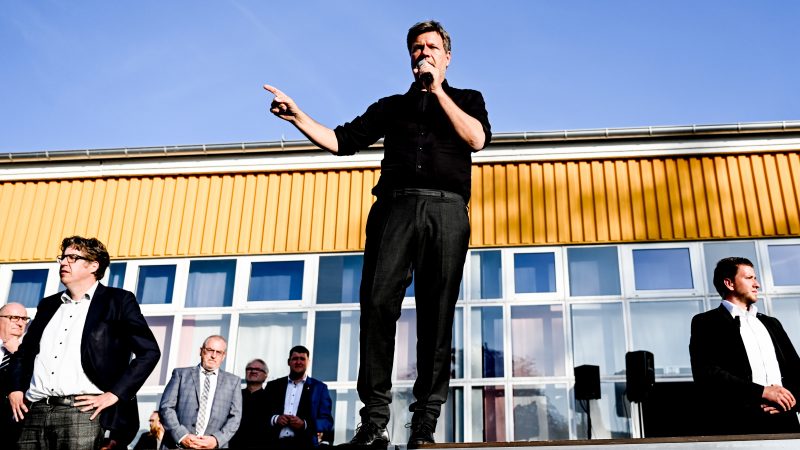 The German government has now officially presented its red tape cutting law to speed up the construction and permitting of LNG infrastructure to get out from under Russia's thumb. [EPA-EFE/FILIP SINGER]

The German government has submitted a legislative proposal to speed up the permitting process and construction of onshore and floating liquified natural gas (LNG) terminals, as well as the necessary pipelines to connect them to the grid.

“Today more than ever, we need to place our energy supply on more robust pillars,” Habeck said in early May, noting the essential nature of efforts to expand renewables alongside the build-up of an LNG import structure.

Germany had set out a timeline of achieving independence from Russian gas by the middle of 2024. Previously, vice-chancellor Robert Habeck had called for “unrealistic” efforts to speed up the process.

Habeck unveiled his law meant to cut red tape on Tuesday (10 May), following consultations with the justice and environment ministries.

Citing the “Russian war of aggression” and the chance of a cut in the supply of Russian gas, his economy and climate ministry cited an “imperative need” for cautionary measures.

The new law would allow public authorities to “waive certain procedural requirements” made mandatory by EU law, like environmental impact assessments. The ministry added that it considered this to be compliant with the law, given the exceptional circumstances.

Other licensing requirements, like an assessment as per water law, would not be changed, the ministry said in a statement. Therefore, “a comprehensive substantive examination by the authorities will continue to be guaranteed.”

Germany’s environmental NGOs, incensed by the rushed construction of LNG terminals they deem to be unnecessary and climate-damaging, are already preparing lawsuits to challenge the government’s push for additional fossil fuel infrastructure.

“It is unacceptable that environmental impact assessments and opportunities for the public and associations to participate can be bypassed, and that justified safety concerns of citizens can simply be wiped away, as the draft provides,” said Constantin Zerger of Germany Environmental Action.

German NGOs tend to be experienced in legal activism and have well-staffed legal teams, which has caused concerns in the government.

Already, they had raised concerns about the destruction of Baltic porpoises’ habitats.

Although Habeck, himself from the Baltic Sea coast, professed to be a fan of the small marine mammal, he has warned environmental groups not to sue the government on this.

“Here I would like to expressly warn against suing against it [LNG infrastructure],” Habeck told RTL in early May. “Should we not have the LNG terminals, and should the gas not come from Russia, security of supply in Germany is not guaranteed.”