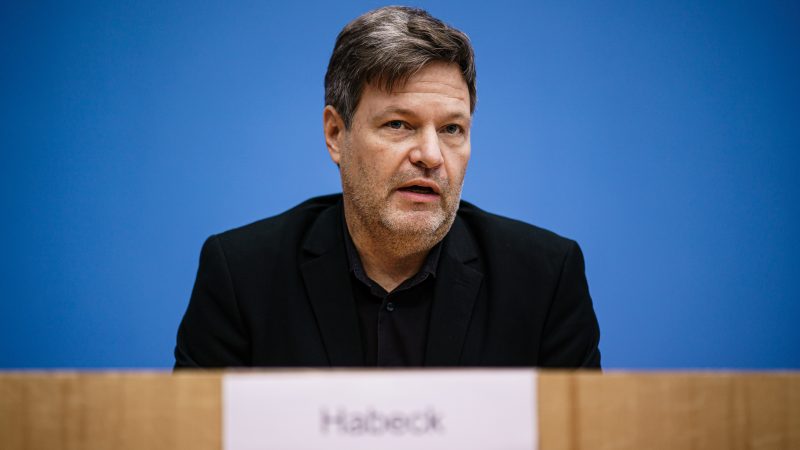 German Minister for Economy and Climate Robert Habeck is facing momentous challenges as he must rapidly expand Germany's renewable energy capacity, sometimes approaching the limits of the doable. [EPA-EFE/CLEMENS BILAN]

As Olaf Scholz was confirmed as Germany’s new Chancellor on Wednesday (8 December), his second in command Robert Habeck faces a massive challenge: kickstarting a rapid expansion of renewables that touches on the limits of the possible.

Some 80% of German electricity use in 2030 should be renewable, reads the coalition agreement of the new German government. “That is three to four times the speed of expansion that we have had so far,” Robert Habeck, the newly-appointed super minister of economy and climate, told journalists before his confirmation on Monday.

To achieve the country’s ambitious climate targets, the solar, onshore and offshore wind sector would all have to speed up their expansion, he explained.

“That will be a major effort necessitating societal debate,” he added.

Aside from a massive increase in solar installations and reserving 2% of land for onshore wind turbines, the new German ‘traffic light’ coalition comprising the social democrat SPD, the Greens, and the business-friendly liberal FDP, aims to up the ante on offshore wind power.

The German targets for offshore wind expansion were last increased in December last year, aiming for 20 gigawatts (GW) installed capacity by 2030 and 40 GW by 2040.

In 2020, Germany had almost 7.8 GW of offshore wind capacity feeding into the grid, which will not increase in 2021, according to offshore service company Deutsche Windguard. Under planned projects, capacity is expected to increase to 10.8 GW by 2025.

But the new German government wants to raise the bar higher and has committed to reaching 30 GW installed offshore wind capacity by 2030, 40 GW by 2035 and a massive 70 GW by 2045, something that Habeck must set into motion as soon as he assumes office.

“I am now looking at the short-term measures,” Habeck told journalists, without elaborating further. “The longer-term and then really effective ones must, I think, be found, adopted and also decided in the first year.”

Habeck’s push to speed up the expansion of offshore wind capacity falls on fertile ground: on 2 December, his predecessor Peter Altmaier signed a political declaration with other North Sea states and the EU’s energy commissioner, Kadri Simson.

The signatories aim “to develop a shared long-term vision for the role of offshore renewable energy to deliver ambitious 2050 energy and climate objectives in the North Seas region,” reads the agreement signed by France, Germany, Norway, Sweden and other countries. They also aim to “discuss improved and more innovative use of EU financing” and “to foster the coordination of national tendering processes.”

The end goal of the North Sea states is to “further energy interconnection” voluntarily, step by step, via joint projects.

Aside from the political unity amongst the North Sea states, EU lawmakers adopted on 30 November a set of recommendations to speed up the deployment of offshore wind.

“The offshore renewable energy strategy is key to the green transition where time is of the essence,” explained Morten Petersen, a leading Danish lawmaker from the centrist Renew Europe political group in the European Parliament.

The report, adopted by the European Parliament’s industry committee, stresses that meeting the 2030 and 2050 climate targets requires a faster deployment of offshore wind energy while ensuring coexistence with other maritime activities like fisheries and shipping.

Increasing public acceptance would be crucial, the report reads: by 2025, no decommissioned wind turbine blades should be dumped into landfills.

“With the committee’s vote, we are putting offshore renewable energy mid, front and centre in the fight against climate change,” Petersen said. The full house of Parliament will vote on the report on 17 January 2022.

The space in which Germany can construct offshore wind farms is limited. The North Sea is divided between the countries bordering it, and Germany’s so-called exclusive economic zone (EEZ) is about the size of Belgium.

Competition for space is therefore fierce. Shipping lanes, fisheries, sand harvesting, military and scientific use all compete with offshore energy to “generate a constantly growing pressure of use,” explains the German shipping and hydrography agency.

The use of maritime space is laid out in so-called maritime spatial plans (MSPs), which are submitted to the EU and coordinated between EU countries. Germany’s plan entered into force on 1 September 2021 and can be seen below. 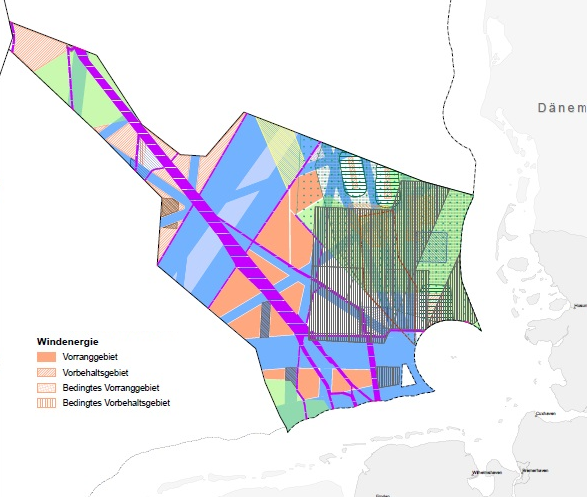 Germany’s EEZ in the North Sea: orange areas are reserved for offshore wind. Image source: Ministry for shipping and hydrography

While Germany aims for 75 GW of offshore wind energy capacity in 2045, the orange areas, which indicate space reserved for wind power, are somewhat limited.

Germany would start to run out of space after installing more than 40 GW of offshore wind turbines, a source closely involved with the plans told EURACTIV. In addition, wind turbines would lose out on efficacy if they are placed too close to one another, according to a 2019 study by German think-tank Agora Energiewende.

Moreover, the German spatial plans would only allow for 54 GW of offshore wind capacity at most, found research institute Fraunhofer.

As shipping routes probably won’t be up for negotiation, this would mean that Habeck may have to cut down on space allocated for nature conservation or military use.

“Offshore installations shall have priority over other forms of use,” reads the new government coalition agreement.

Contacted by EURACTIV over the matter, a spokesperson for the economy and energy ministry said media enquiries regarding offshore wind expansion could not be answered before the ministry officially changes hands. 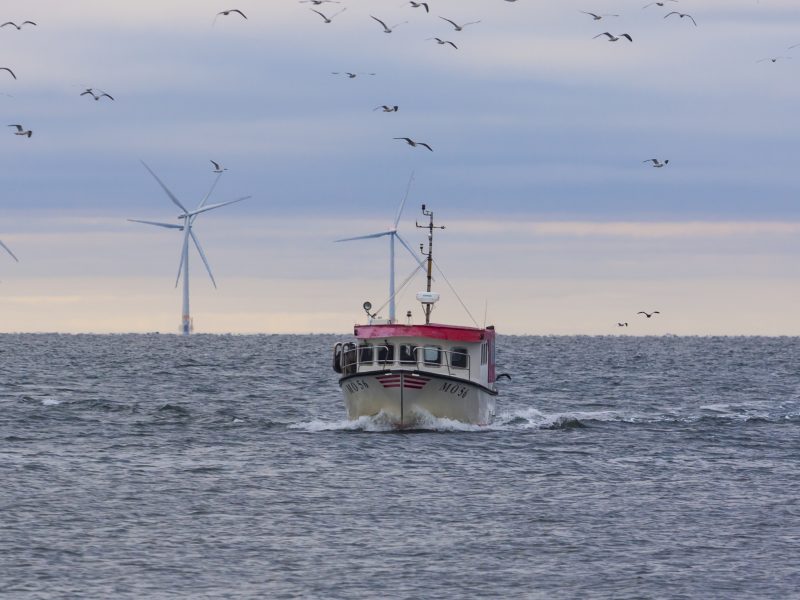 Europe’s offshore wind industry has reported high growth rates in 2020, but now that EU member states are putting the finishing touches on their maritime spatial plans, fisheries could put the brakes on the expansion.

One response to “German offshore wind expansion ‘will be a major effort’, says Habeck”