Gas facility in Ukraine, an important gas transit country, for the EU. The Nord Stream 2 project could threaten that. [James Crisp/Flickr]

EXCLUSIVE / A spat between Germany and Poland linked to the Nord Stream 2 pipeline project almost derailed plans for European Union leaders to call for the swift signing of the Paris Agreement on climate change at today’s summit in Brussels.

Poland demanded the climate statement be axed from draft European Council conclusions, to be agreed by EU leaders today, after Germany pushed for a planned debate by leaders on energy security to be dropped.

The tit-for-tat retaliation led to a week of furious diplomacy, driven by an anxious France, which hosted the UN Climate Change Conference (COP21) that led to the landmark deal to cap global warming.

The Paris Agreement said planet-warming needed to be capped at well below 2 degrees Celsius (3.6 degrees Fahrenheit) and set an aspirational goal of 1.5 degrees.

Heads of state and government will now debate the COP21 pact, but it has been relegated to the “other items” of the European Council, which will be dominated by talks to seal a deal with Turkey to curb the refugee crisis.

The pressing nature of the crisis was blamed for the issue being taken off the table, albeit temporarily. In February, leaders managed to discuss the Brexit deal, despite the ongoing humanitarian catastrophe.

EURACTIV can reveal that an argument between German and Polish diplomats centering on the recent Commission package on gas security, but given added spice by the controversial Nord Stream 2 pipeline project, was the real reason.

The energy security plan was put forward by the European Commission in February. EU leaders were scheduled to discuss it at today’s summit as well.

It outlined a strategy to make the bloc more resilient to shortages and to unreliable suppliers, such as Russia’s Gazprom, who could be tempted to hold countries to ransom for political reasons.

Most controversially, it requires member states to submit their intergovernmental and commercial energy contracts to the Commission for approval before they are signed.

That is problematic for Germany, which would be prepared to submit contracts but only after they are signed, sources said.

The European Commission wants the power to review energy deals between member states and countries such as Russia before they are signed, the bloc’s top energy official said on Tuesday (26 January) –  a move opposed by some states reluctant to cede control to Brussels.

The ongoing controversy over the Nord Stream 2 gas pipeline project has added spice to the issue.

The German-backed project with Gazprom is under scrutiny by the Commission, amid fears it will only increase Russian gas addiction in the EU.

The executive is checking the project to ensure it adheres to EU law. A similar project in Bulgaria was eventually cancelled after accusations it had broken EU law.

The Commission is worried the plan, that would double the amount of gas shipped directly from Russia to Germany, runs counter to the goals of its Energy Union strategy and would cost Ukraine, a major transit country, much needed revenue.

But Poland, which is dependent on Russian gas imports, said that if the package was dropped for the summit, the resolution calling for the swift ratification of the Paris Agreement would also need to be sacrificed.

Poland is not only dependent on Russian gas imports but its economy depends on coal, an industry that must be phased out if the Paris Agreement’s goals are to be reached.

The security of supply package is part of the Commission’s Energy Union strategy. It aims to ensure that each member state has at least three different energy suppliers.

A senior EU official said that member states had argued over the inclusion of the climate change and energy security in the Council conclusions but that after much discussion a compromise was reached.

The draft summit text urges law-makers “to proceed with work on the proposals to reinforce the EU energy security as a matter of priority”.

It also, “underlines the need for the European Union and its member states to be able to ratify the Paris Agreement as soon as possible”.

It also says the EU is committed to a target to cut greenhouse gas emissions domestically by at least 40% by 2030, as agreed at by leaders in October 2014.

Leaders were scheduled to follow-up on an earlier discussion by EU environment ministers, some of whom had criticised the Commission for its reluctance to raising the bloc’s greenhouse gas reduction target for 2030.

The Commission is concerned that reopening the discussion on the 2030 target would derail a difficult debate this year on how to share out that goal among the 28 member states, including Poland. 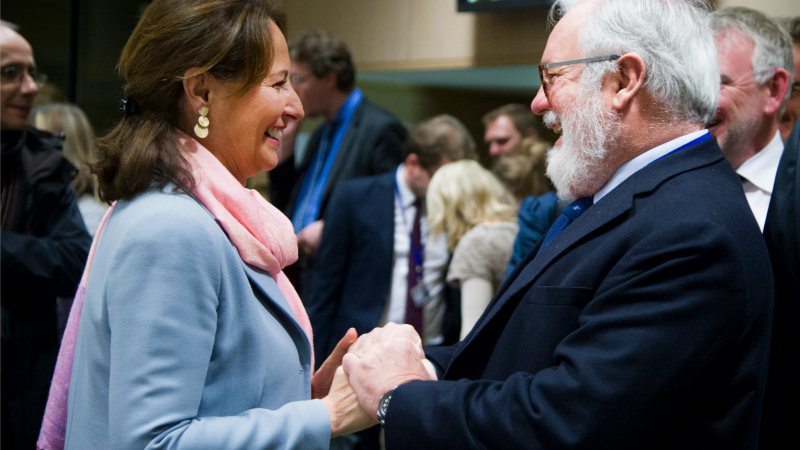