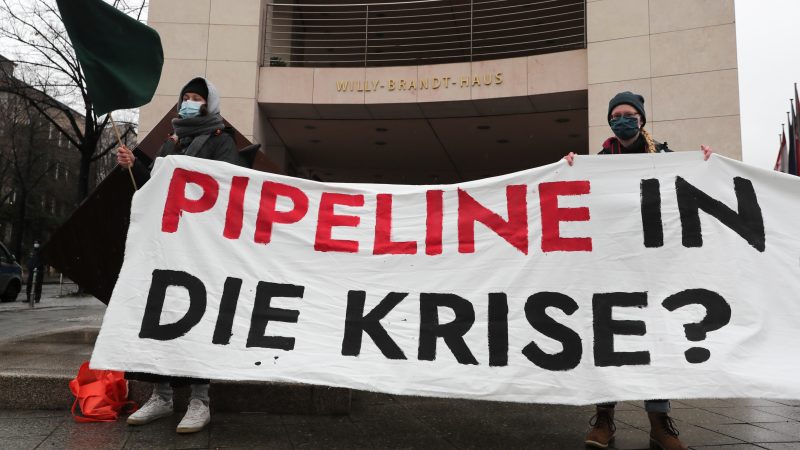 File photo. Environmental activists from the Fridays For Future (FFF) and Ende Gelaende movements hold a placard reading 'Pipeline into the crisis?' during a demonstration in front of the Social Democratic Party (SPD) headquarters in Berlin, Germany, 12 January 2021. The climate activists criticized the state government of Mecklenburg-Vorpommern for the expansion of the Nord Stream 2 gas pipeline. [EPA-EFE/HAYOUNG JEON]

The watchdog said on Tuesday (16 November) it had temporarily halted the certification process because the Swiss-based consortium behind Nord Stream 2 first needed to form a German subsidiary company under German law to secure an operating licence.

European prices jumped 9% on news of the hold-up, with the Dutch front-month contract briefly trading at 89.00 euros/MWh.

“This does push back expected timelines quite a bit,” said analyst Trevor Sikorski at Energy Aspects, adding that it was unclear how long the process of establishing a new company and reapplying for certification would take.

First flows through the pipeline look very unlikely in the first half of 2022, he added.

Nord Stream 2 has faced stiff opposition from the United States and some European states, which say it will make Europe too reliant on Russian gas. But other European governments say the link is vital to secure energy supplies, with gas prices surging in recent weeks and the threat of power outages looming this winter.

Nord Stream 2 said it had been notified by the regulator about the certification decision. “We are not in a position to comment on the details of the procedure, its possible duration and impacts on the timing of the start of the pipeline operations,” it added.

“Any delays in the pipeline certification, all the more so on the eve of winter, is not in the interests of the European Union, that’s without any doubt,” Konstantin Kosachyov, deputy chairman of Russian parliament’s upper house, told TASS news agency.

The regulator, the Bundesnetzagentur, said it would only assess an application after a transfer of major assets and budgets for staffing to a German subsidiary.

“A certification for the operation of Nord Stream 2 will only be considered once the operator is organised in a legal shape compliant with German law,” it said.

Once these preconditions had been met, it said it could continue assessing the submission in the rest of the four-month application period. Before the suspension, that period was meant to run until early January.

Ukraine is one country bitterly opposed to the pipeline, which has fed into broader tensions between Kyiv and Moscow at a time when the United States has accused Russia of building up troops near Ukraine in preparation for a possible attack, an allegation the Kremlin has dismissed.

The head of the Ukrainian energy firm Naftogaz told Reuters that he welcomed the German energy regulator’s decision.

Kyiv will lose revenues if gas from Russia bypasses it and it accuses Moscow of using energy as a weapon to threaten Europe’s security.

Moscow has denied this and says Nord Stream 2 is a purely commercial venture that complies with European energy rules.

Ukraine has successfully applied to be part of the consultation process to certify the pipeline. 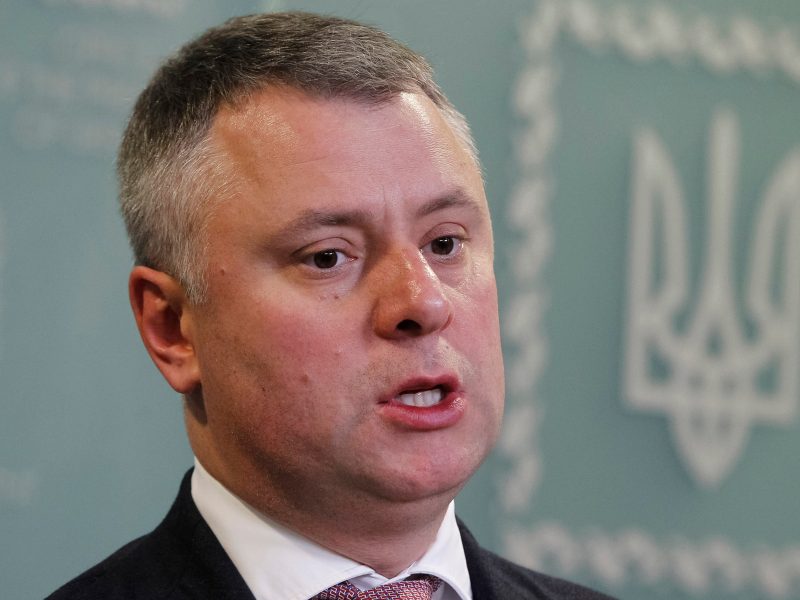 Germany’s energy regulator BNetzA said on Monday (15 November) that the Ukrainian gas companies Naftogaz and GTSOU will be included in the ongoing German certification procedures of the Nord Stream 2 gas pipeline for which they have applied.

In a written comment sent to EURACTIV Olga Bielkova is the director of government and international affairs at GTSOU, the Gas TSO of Ukraine, expressed satisfaction from this development.

“The latest decision of the German regulator to carefully examine NS2AG application, review the legal contradictions, and suspend the certification process, is important. But until the final decision is reached, we will continue to defend Ukraine’s interests and challenge NS2AG’s certification as an independent operator”, Bielkova stated.

Moscow has already used a route under the Baltic Sea for Nord Stream 1 – the predecessor to Nord Stream 2 – which has a capacity of 55 billion cubic metres (bcm), equivalent to half Germany’s annual gas usage.

Nord Stream 2 will double that and make Germany a central arrival hub for European gas volumes for onward distribution.

The German regulator said the Berlin economy ministry and the European Commission had been made aware of its notice to Nord Stream 2.

The Commission has two months after the German regulator’s decision to assess the application for its part.

“Under the current circumstances there is further downside for the timing of the start-up of Nord Stream 2 because even though Germany is more friendly towards this project than EU, the pipeline’s regulatory certification could face even more hurdles during the EU commission review stage,” said Carlos Torres Diaz, head of gas and power markets at Rystad Energy.