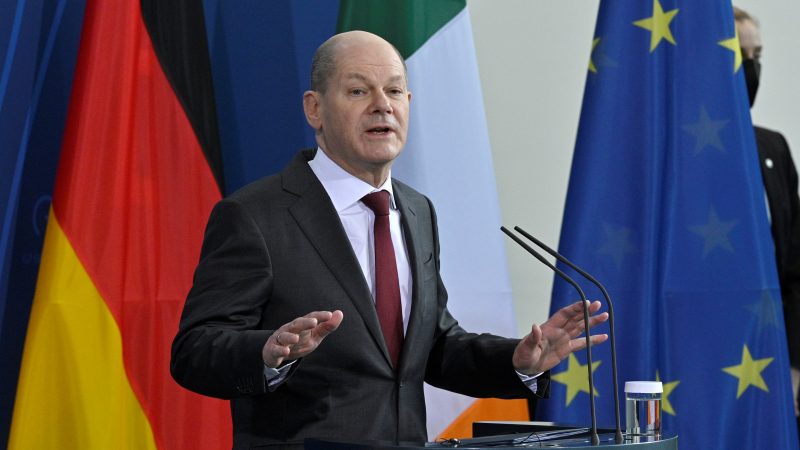 German chancellor Olaf Scholz condemned Russia’s “breach of all agreements under international law that Russia has explicitly entered into over the last 50 years, especially the Helsinki Final Act,” Scholz said at a press conference on Tuesday (22 February).

While Germany has focused on a diplomatic approach to defuse the tense situation, Scholz stressed that the “situation today is fundamentally different.”

“And therefore, in view of the latest developments, we must reassess this situation, also with regard to Nord Stream 2,” Scholz emphasised.

Germany would withdraw the existing report on the security of the supply, which is the necessary administrative step “to ensure that the pipeline cannot be certified. And without this certification, Nord Stream 2 cannot go into operation at all,” Scholz said.

The Nord Stream 2 pipeline is ready, but before starting operations, it needs certification by Germany and the EU. The German certification process began on 8 September 2021. The German regulator had until 8 January to reach a draft decision on the NS2AG certification.

Thereafter, the European Commission has between two and four months to review the German decision and make its own recommendations which BNetzA is obliged to comply with.

The German Ministry of Economy made it clear: “We have stopped the certification of Nord Stream 2. If reality changes, the assessment of reality has to change too,” Economy Minister Robert Habeck said in a statement.

However, this does not necessarily mean Nord Stream 2 will end for good. The German Ministry of Economy will only reassess the situation for now.

While Scholz stressed that this process would “drag on for sure,” there is still room for Russia to de-escalate the situation and get back to the negotiation table to save the controversial gas pipeline.

“This could then easily restart, should a diplomatic solution be found. Germany buying time here, and getting an important bargaining chip for eventual negotiations,” Simone Tagliapietra, a senior fellow at the think tank Bruegel, said on Twitter.

The end of German hesitancy

Nord Stream 2 has been a long-standing issue for the Western alliance. While the US and many EU-states have called on Germany to halt the project due to fears over increased dependency on Russia for its gas supply, Berlin has so far clung to the project and been hesitant to clearly state that Nord Stream 2 would end if Russia invaded Ukraine.

During his state visit to Washington in early February, Scholz refrained from stating that ending the controversial gas pipeline would be one of the potential measures to counter Russian aggression.

The US has been more outspoken on the topic. “If Russia invades, that means tanks or troops passing the border of Ukraine, then there will be no longer a Nord Stream 2. We will bring an end to it,” US president Joe Biden said at a press conference together with Scholz in early February.

No pipeline project without the Energy Charter Treaty

For Germany, putting a stop to the pipeline may open up a whole host of legal cases through the contentious investment protection treaty from the 1990s, which could in part explain why Scholz delayed the pipeline rather than entirely shutter it.

“There is a credible risk that we could see action taken against Germany under the Energy Charter Treaty over the cancellation of this pipeline – Nord Stream 2’s backers have already taken legal action against the EU,” said Amandine van den Berghe, trade lawyer at environmental NGO ClientEarth.

Uniper especially has not been shy to wield the Energy Charter Treaty against governments, going so far as to sue the Netherlands for €1 billion in missed profits in 2021 due to the country’s announcement that it would phase out coal.

“The influence of the ECT on Germany is considerable – evidence has been released to show that fears of litigation by coal companies led the German government to set exorbitant compensation costs.”

In the case of Nord Stream 2, the consortium of European investors put up €5 billion, but that may not be the upper limit of claims in potential lawsuits. As part of the ECT, companies can claim missed earnings via arbitration proceedings, which experts said may be possible if the pipeline project was halted.