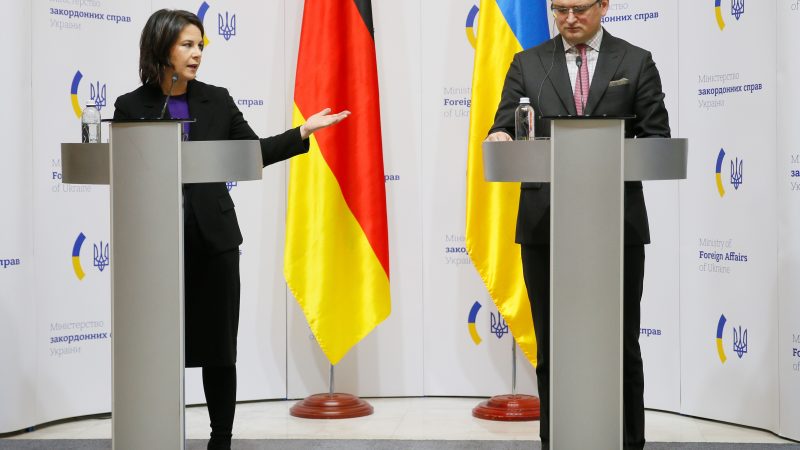 Investments in the green economy of Ukraine are at risk of drying up amid ongoing tensions with Russia, the German foreign ministry has said. [EPA-EFE/GLEB GARANICH / POOL]

The amassing of Russian troops at the Ukrainian border has jeopardised Germany’s plans to invest in renewable energy production and help a green transition in Ukraine, the German foreign ministry said on Monday (21 February).

As part of an agreement between the US and Germany to end disputes over the Nord Stream 2 fossil gas pipeline, Berlin committed to attract $1 billion in private investments and provide $245 million in direct support to aid the green transition in Ukraine.

But now “Russia’s military threats are having a very real impact on the situation in Ukraine, particularly on the investment climate,” a spokesperson for the German foreign ministry said.

“Is [the Russian military threat] a strain on plans to invest in renewable energy and hydrogen? Of course, it is,” the official said.

“Where people, where companies invest in the future in Ukraine, this is of course enormously complicated by the current tensions,” he added.

To help alleviate the impact of the Russian threat on the Ukrainian economy, countries like Canada, which offered $500 million in loans in mid-February, and Germany are funnelling money into Ukraine.

“Just a week ago, the federal chancellor was in Kyiv and promised €150 million in already approved loans,” said Steffen Hebestreit, the lead spokesperson for the German government. Germany would make another €150 million available on top of this, he added.

But the money is yet to arrive and clearing the loans could take a while, Hebestreit told journalists on Monday.

Ukraine, whose financial market is not as flush as its European counterpart, is therefore comparatively reliant on foreign investments to drive the expansion of renewable energy.

“In Ukraine, it is difficult to mobilise money for the expansion of renewable energy,” Yuriy Vitrenko, CEO of Ukrainian energy company Naftogaz, explained in an interview with FAZ.

But the uneasy environment for investments into Ukraine may bring Germany’s plans to boost the production of renewable electricity in the country to a premature halt.

It could also put a stop to Germany’s work on arranging talks with Ukraine about the supply of renewable hydrogen – a gas many hope will help the decarbonisation effort in Europe.

Germany is hoping to import renewable hydrogen for its energy-hungry industry and is currently engaging in so-called hydrogen diplomacy with countries like Russia, Saudi Arabia, Angola and Nigeria.

Alongside this, Germany wants to establish a “hydrogen embassy” in Kyiv, according to Foreign Minister Annalena Baebock during her inaugural visit to Ukraine in January. The viability of this plan, however, is now in question.