By Georgi Gotev and Sarantis Michalopoulos

In red, the Interconnector Greece-Bulgaria (IGB), also known as the Stara Zagora-Komotini pipeline. The TAP pipeline is in yellow. [IGB website]

Greece confirmed on Wednesday (10 November) delays in the construction of a key gas interconnector linking Greece and Bulgaria (IGB), reported earlier by EURACTIV Bulgaria, but insisted that they were due to supply shortages.

Sources in Athens close to the issue, who spoke to EURACTIV Greece on Wednesday on condition of anonymity, insisted that Greece was “100% supportive” of the completion of the project but that AVAX, one of the Greek companies building IGB, was facing delays in “receiving materials”.

This comes after АVAX S.A denied credible and exclusive information obtained by EURACTIV Bulgaria that it had applied pressure on the Bulgarian government to obtain more time and money to fulfil its contractual duties.

For over a decade, businesses and politicians have made optimistic statements about the IGB interconnector (also known as Stara Zagora-Komotini or ICGB), but the construction is still unfinished.

ITGI, the Turkey-Greece-Italy Interconnector, offers the quickest way to open up the Southern Gas corridor, and could pump Azeri gas into Bulgaria as soon as from 2013, Harry Sachinis, Chairman & CEO Public Gas Corporation of Greece (DEPA), told EURACTIV in an exclusive interview.

The interconnector is crucial for Bulgaria because its completion would break the monopoly of Russian gas on the Bulgarian market for the first time. The IGB links to the Trans Adriatic Pipeline (TAP), bringing Azerbaijani gas from Greece to Italy.

Bulgaria has a contract with Azerbaijan to import one billion cubic meters of gas per year (bcm/y), which roughly amounts to one-third of its consumption.

Due to the endless delays in the IGB construction, Bulgaria’s gas company Bulgargaz had to renegotiate two temporary alternative delivery routes with the Azerbaijani supplier.

Reportedly, the Azerbaijani side is getting nervous about this. Baku has no contractual obligation to supply an alternative gas route, and its supplies are a mere gesture of good faith.

In any case, these alternative supplies amount to far less than the agreed 1 bcm/y. Azerbaijani gas is two and a half times cheaper than Russian gas.

The construction of IGB is carried out by AVAX S.A. with another Greek company, Corinth Pipework Industries S.A., being responsible for the manufacture and delivery of line pipes for the project under a separate contract. 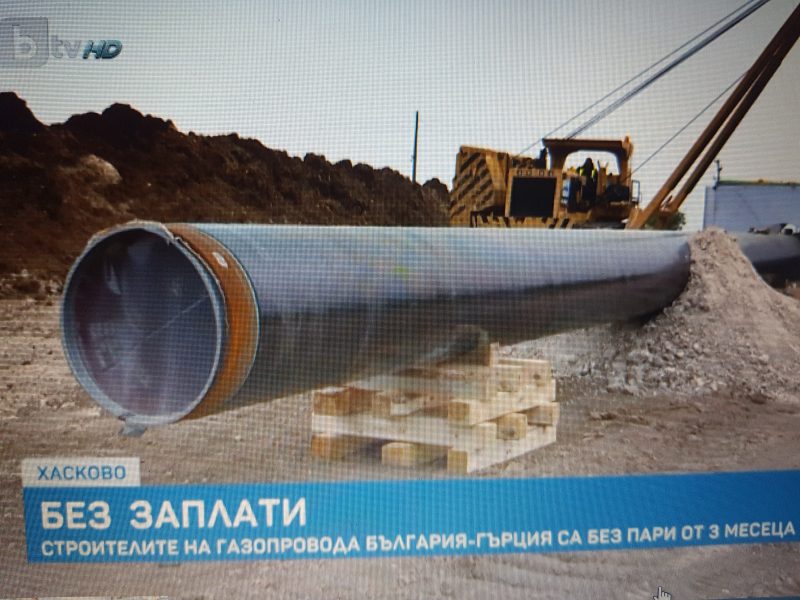 EURACTIV Bulgaria obtained exclusive information from a Bulgarian source entirely familiar with the situation that the Greek contractor will not meet the announced deadline of the end of December 2021 to complete construction works.

Accordingly, the deadline for putting the interconnector into operation on 1 July will not be met.

The Bulgarian source told EURACTIV, on condition of anonymity, that representatives of AVAX S.A. recently met with Bulgaria’s caretaker Prime Minister Stefan Yanev. They asked for an extension of the construction period by at least six months and asked not to be slapped with penalties for the delay, the source said.

In addition, AVAX S.A. also requested an additional amount of €30 million to complete the job and warned they would stop construction unless their demands were met.

AVAX S.A. denied the allegations and stressed it remained committed to the project.

“This information is not correct. AVAX remains dedicated and in close and amicable cooperation with our Client ICGB and all involved stakeholders (including both governments) in the closing stage of this important project,” the Greek company said in an email.

ICGB representatives told EURACTIV they haven’t been notified by AVAX that a 6-months extension would be requested and cannot confirm such information.

The Bulgarian government did not reply to EURACTIV’s request for comments while the energy ministry said it could not comment on issues under the prime minister’s direct authority or confirm the alleged meeting had taken place.

“The management of the Ministry of Energy holds regular meetings with both the contractor and the suppliers to speed up the activities for building the interconnector. For example, in the presence of the Greek Minister of Environment and Energy Kostas Skrekas, [caretaker energy] Minister [Andrey] Zhivkov received an assurance from the shareholders in the project company ICGB that the deadlines agreed with the last annexe – namely: the completion of construction by the end of 2021 and commissioning until June 30, 2022 – will not change.”

The ministry also confirmed there have been delays in the construction and that there is a penalty clause for delays in completion.

“In its numerous meetings with the project implementers, the Ministry of Energy has announced that no more delays will be allowed. If this happens, the Bulgarian side will activate the clause in the contract for payment of penalties in the amount of €90,000/ day. However, we hope that such a solution, which does not benefit any of the parties, will not be reached, and the interconnector will enter into commercial operation as agreed – in mid-2022.”

Another Greek source specified that AVAX’s subcontractor VALVITALIA, a company that operates in the field of supply of equipment and components intended for energy, is said to be facing delays in its orders for materials from China and “therefore the rest of the project cannot proceed unless the preliminary work is done.”

In Bulgaria, many observers stressed that the Gazprom-favoured TurkStream, also known as Balkan Stream, was built in record time and without EU assistance. Meanwhile, IGB, co-financed by the European Union’s European Energy Programme for Recovery, is struggling to move forward.