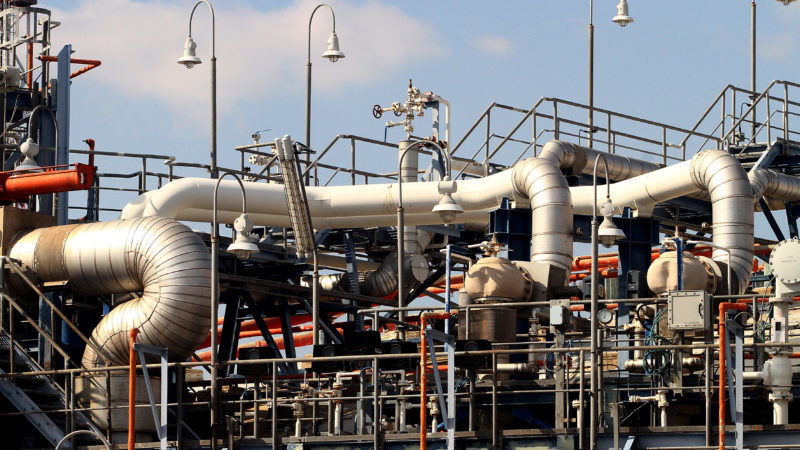 An image dated 14 March 2013 and made available 21 June 2013 showing the facilities of the Hellenic Gas Transmission System Operator (DESFA) on the island of Revithousa, Greece. [Alexandros Vlachos/EPA]

Greece’s privatisation agency (HRADF) will push back to February the deadline for the submission of binding offers for a 66% stake in natural gas grid operator DESFA, a source close to the process said on yesterday (18 December).

“The interested parties have sought an extension. It will be granted with the deadline sometime in February. That date has not yet been set,” the source said, requesting anonymity.

The current deadline is 22 December.

HRADF had earlier identified the two investor groups qualified to proceed to the next phase of the tender – and the submission of binding bids – as Spain’s Regasificadora del Noroeste (Reganosa) and a consortium of Italy’s Snam, Spain’s Enagas Internacional, Belgium’s Fluxys and Dutch Gasunie.

The asset sale is part of a privatisation program undertaken by Greece under the terms of its multi-billion euro bailout.

Based on an updated draft of key targets of the bailout programme, the nomination of the preferred bidder is to be completed by Feb. 2018. A share purchase agreement and shareholders’ agreement is to be signed by April, and a conclusion by June 2018.

It transports gas from the Greek-Bulgarian and Greek-Turkish borders to Greek consumers via a 1,459-km (907-mile) pipeline.

A previous attempt to privatise DESFA collapsed in 2016.

Under its privatisation programme, an important part of its international bailout, Greece and its biggest oil refiner, Hellenic Petroleum, had agreed to sell the DESFA stake to Azerbaijan’s SOCAR for €400 million.

The deal collapsed in November 2016 after Athens passed legislation raising DESFA’s gas tariffs by a lower amount than SOCAR had expected and SOCAR asked for a lower price.