EURACTIV.com, based on reporting by EURACTIV.sk 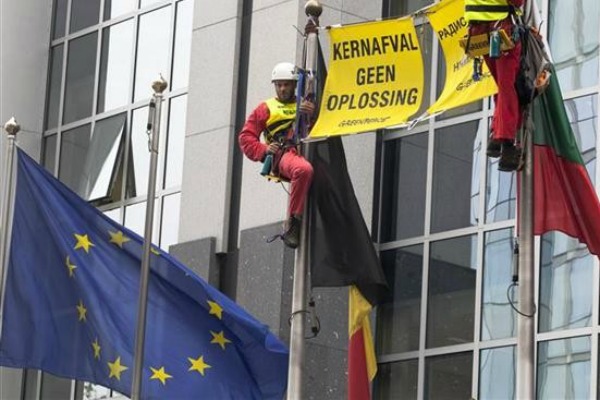 The stress tests carried out on Europe's nuclear power plants in the wake of the Fukushima disaster last year have already brought "important wins", especially in terms of transparency, says Greenpeace nuclear expert Jan Haverkamp. Speaking to EURACTIV.sk in an interview, he also said the tests had exposed some "black holes" in the emergency responses that need to be addressed.

Greenpeace activists can hardly be accused of pro-industry bias when it comes to nuclear safety issues.

So when their nuclear policy adviser Jan Haverkamp says European regulators deserve praise for carrying out their "stress tests" in a transparent manner last year, it is probably worth noticing.

Until the Fukushima disaster, nuclear safety checks were performed only occasionally "in a closed circle of local regulators" or by delegations of the International Atomic Energy Agency (IAEA) looking at general safety issues, the activist said.

With the EU stress tests, he said checks have been taken to a new level. This time, the safety tests were much more specific and built on scenarios that were not taken into account before.

"What we have here is a peer review of very concrete work – people are not just asking general questions. With the stress tests you look at various scenarios, no matter what chance there is that they actually materialise."

An important win from the stress tests is that they have confronted safety teams with situations that were not necessarily foreseen before Fukushima, such as dealing with multiple emergencies on several reactors.

"That is the first win of the stress tests," Haverkamp said. "We are forced to think of similar situations that made Fukushima so unsolvable."

For the Greenpeace activist, another big win is the transparency of the whole exercise, which included peer reviews with local communities and NGOs, although some national regulators did not open up as much as others.

Taking the French nuclear safety regulator ASN, Haverkamp said meetings had been organised with local committees – consisting of citizens and civic groups – whose comments were taken in consideration for the final stress test report.

"From all the reports, the French regulator had the most thorough communication," Haverkamp said.

What's more, the ASN had come up with "a very large list" of safety measures to be implemented right away, regardless of the stress test results, he said. "They were very clear when journalists asked what would happen if the required changes were too expensive. ASN President André Lacoste replied simply: 'If they do not want to invest, they can always close the power station'."

By comparison, he said, nuclear safety regulators in countries like Slovakia or the Czech Republic showed much less openness. When Greenpeace submitted comments to the Slovak regulator, the response came in with "six pages of defensive language why everything we suggested was rubbish."

"So you see a clear attitude difference. Some regulators, such as the French, the Finns, and to a certain extent also the Belgians, are capable of looking into things."

In Haverkamp's view, "that shows you a little difference between the independence of [French regulator] ASN and regulators in Slovakia, Hungary, the UK, Sweden, Bulgaria or in the Czech Republic."

The Finnish nuclear safety agency also received praise, with Haverkamp describing the whole exercise as "impressive". The Finns, he said, decided to report on some safety issues separately, giving details of which ones needed more attention or more time to resolve. "They did not claim anything about passing or not passing the tests. I appreciate their clear communication," Haverkamp said.

However, the tests have also revealed a number of "big shortcomings," said the Greenpeace activist.

Haverkamp points in particular to a lack of coordination between the different emergency response teams inside and outside the nuclear facility. Nuclear regulators, he said, have no mandate in dealing with safety issues outside nuclear power plants. These are typically dealt with by the interior ministry – the fire brigade, police, army and other emergency authorities.

"This is a big black hole," Haverkamp pointed out, describing the off-site emergency response in Fukushima as "a complete nightmare". "Communication about what is considered as acceptable level of exposure of radiation was chaotic. It delivered a lot of psychological, physical and economical stress."

At issue is how to deal with power stations that are situated near residential areas, such as the the Doel nuclear power station, which is situated at only 10 km from the centre of Antwerp in Belgium. "If something goes wrong, how do you evacuate all the people in 24 hours? Maybe the politicians should rethink whether the risk is not too big."

One idea put forward by Greenpeace is to create a special group under the authority of member states in the EU Council of Ministers to work on emergency response issues.

"Our idea has been taken up by Luxembourg, Denmark and Austria. I suppose Germany also will support it because they have already been doing that themselves."

The response to terrorist threat is another reason for concern.

One part of the EU nuclear stress tests looked at security issues but their focus was mainly on preventing theft of fissile materials. This is too narrow for Haverkamp, who believes insufficient attention has been paid to terrorist attacks by the ad-hoc security group set up by EU member states in the EU Council of Ministers.

"When Germany was taking its decision on the closure of eight nuclear power stations last year, one of the important arguments was that their protection against terrorist attack was very low. There are reasons for taking terrorist attack as an important issue for nuclear power stations. I am very concerned that this security group is not looking at the real issues. But let's wait until their final report."

Following the 11 March earthquake and tsunami in Japan and the nuclear tragedy at Fukushima, European leaders agreed to set the "highest standards" of nuclear safety and submit all plants to "stress tests”.

The 143 nuclear power plants operating in Europe, plus the six under construction and 15 planned, are all included within the EU's stress test remit.

The stress tests will examine whether nuclear power plants can withstand the effects of natural disasters such as earthquakes and floods and, secondarily, man-made actions such as plane crashes and terror attacks.