The minister of economy of Lower Saxony, Bernd Althusmann (2-R), inside a fuel cell rubbish truck during a visit at a hydrogen production facility of energy provider EWE in Elsfleth, northern Germany, 23 July 2020. The facility contains an electrolyzer and a hydrogen storage to produce hydrogen of renewable energies for fuel cell driven vehicles. [EPA-EFE/FOCKE STRANGMANN]

Clean hydrogen – the sort produced from renewables through electrolysis – is considered a central element of the decarbonised energy system envisioned by the European Commission.

Low-carbon gases such as hydrogen or biomethane can replace fossil fuels in hard-to-abate sectors of the economy such as the steel or chemical industry, shipping, aviation and heavy-duty road transport where electrification is currently not feasible or too expensive.

Scaling up the production and use of clean hydrogen has therefore become a political priority for the European Commission, which presented a dedicated hydrogen strategy in July.

And while hydrogen today is mostly produced close to where it is used, that might change in the future as both production volumes and transport distances look set to increase.

Pipelines, after all, “are the cheapest method of distribution where demand is large enough,” says an EU-funded study by consultancies Guidehouse and Tractabel Impact, which was published by the European Commission in July this year.

“A progressive uptake of hydrogen solutions can also lead to repurposing or re-using parts of the existing natural gas infrastructure, helping to avoid stranded assets in pipelines,” the Commission wrote in its hydrogen strategy.

The Commission’s support for using gas pipelines to transport hydrogen was confirmed earlier this year by Frans Timmermans, the vice-president of the EU executive in charge of overseeing the European Green Deal.

While the EU is looking to develop “a dedicated hydrogen infrastructure,” repurposing existing gas networks could help reduce transition costs, Timmermans said in May as the Commission presented its proposed EU recovery plan from the COVID-19 crisis.

“It is important that we look at existing natural gas and LNG infrastructure to see to what extent it is already usable for hydrogen or can be adapted to the use of hydrogen,” he said. “The more we can have dual use of infrastructure, the better it is – also to make the transition to green hydrogen affordable in the future”.

“I’m really excited by those possibilities and we will do a lot of work in that direction,” Timmermans said back then.

The European association of gas transmission system operators, ENTSOG, even believes infrastructure should be developed before hydrogen production volumes are ramped up, saying this will encourage hydrogen consumption in key end-use sectors like transport and industry.

“The way forward to develop a strong hydrogen market and economy starts with the development of the appropriate infrastructure that connects production sites (onshore and offshore) with consumers,” ENTSOG told EURACTIV in emailed comments.

The big question for policymakers is to determine the exact costs of retrofitting pipelines and LNG terminals, something which is currently being investigated by the gas industry, ENTSOG said.

Gas Infrastructure Europe (GIE), another industry association, has identified four main pathways to develop a hydrogen infrastructure, including the direct shipment of hydrogen to Europe via pipelines or the conversion of other gases into hydrogen after they land at LNG import terminals.

GIE is currently preparing a detailed cost-benefit study for publication in October which will assess the pros and cons of different options.

But while that “backbone” plans to convert pipelines that have become redundant due to decreasing demand, those might not be available everywhere and would need to be complemented by new infrastructure.

Until larger volumes of clean hydrogen become available, another option is to blend small amounts of hydrogen with natural gas in existing pipelines, a solution that could prove attractive in a transitional phase because it doesn’t require any retrofits.

“However, blending is less efficient and diminishes the value of hydrogen,” the Commission says in its July strategy. “Blending also changes the quality of the gas consumed in Europe” and may therefore also create a fragmentation in the European gas market, the Commission cautions. 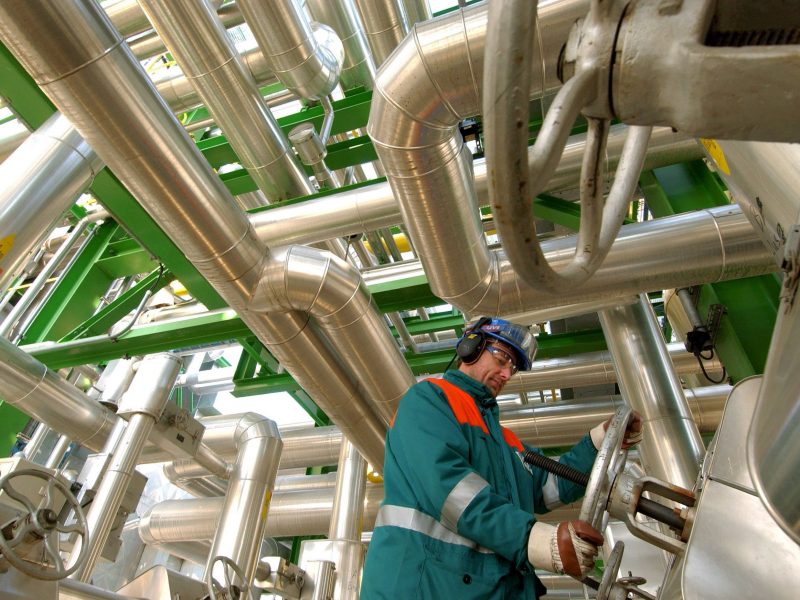 According to ENTSOG, both options are possible and might co-exist in a transition phase.

At the end of the day, the cost will vary depending on whether hydrogen is blended with natural gas or transported in pure form.

Put simply, the closer you get to pure hydrogen, the more expensive it becomes. At low percentages, existing infrastructure might for instance already be “hydrogen-ready,” ENTSOG explained. And some countries like France already allow blending up to 10%.

But that doesn’t mean gas operators can start injecting hydrogen in the grid immediately – adjustments may also be required at the consumer end depending on their requirements.

Some industrial end-users like steelmakers, for example, would prefer being supplied with pure hydrogen as a way to decarbonise their operations. But others like the petrochemical or plastic industry need high-quality natural gas for their manufacturing processes, and would need de-blending equipment.

For households, converting to hydrogen could imply changes to home appliances such as gas stoves. One example is the H21 project in Leeds, Northern England, where a whole part of the city is being covnerted to hydrogen, including the burners in people’s homes.

“The upper limit for hydrogen blending in the grid will depend on the equipment and users connected to it and their possibilities to adapt to hydrogen concentrations,” ENTSOG said. Making the gas system ‘hydrogen ready’ may also require the development of new technical solutions such as membranes for ‘de‐blending’, a spokesperson explained.

And as the relative amount of hydrogen in the blend increases, so does the amount of retrofits required. Beyond a certain level, some argue it might even make more economic sense to transport hydrogen in pure form.

“Typically the decision on whether to repurpose to 100% hydrogen or H2 blends should be based on a case‐by‐case study” involving TSOs, DSOs and end-users based on their  infrastructure and downstream applications, ENTSOG says.

Marcogaz, an association dealing with technical issues for the gas industry, has mapped out those different requirements (see graph below). 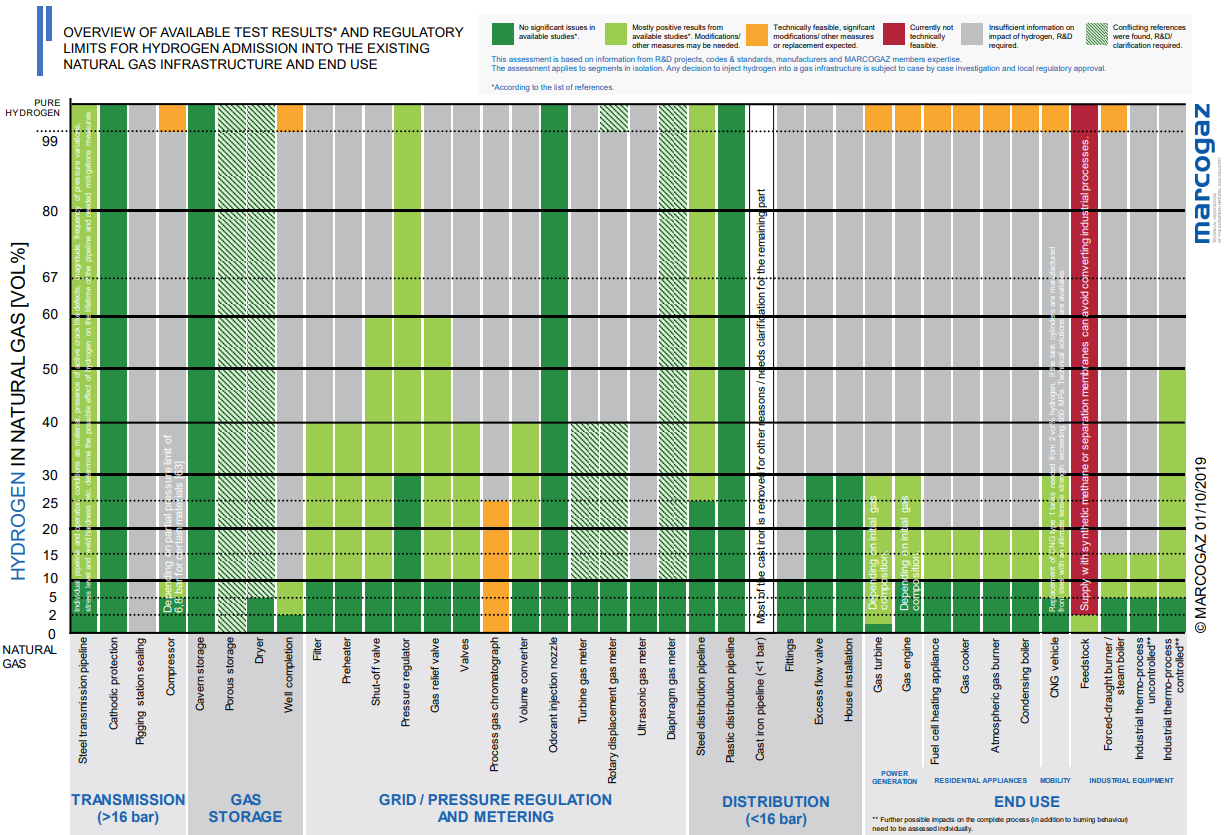 But higher concentations can only be reached “through R&D by further measures or replacement,” says Marcogaz, which produced an overview of current hydrogen limits for use in existing natural gas infrastructure.

“This is going to make things extremely complicated,” said Jonathan Stern from the Oxford Institute of Energy Studies, who spoke at a EURACTIV online event earlier this year. “I think this could take us a lot of time, just as it has taken us a lot of time for natural gas,” he told participants at the event, reminding that it took 30 years to build a functioning EU-wide market for natural gas.

The Commission seems to acknowledge those risks, pointing to potential fragmentation in the EU gas market as a result of gas blending.

“Current gas quality standards – national and CEN – would need to be updated. Moreover, reinforcement of instruments may be needed to secure cross-border coordination and system interoperability for an unhindered flow of gases across member states,” says the Commission’s hydrogen strategy.

“These options require careful consideration in terms of their contribution to the decarbonisation of the energy system as well as economic and technical implications,” the EU executive argues.

Environmentalists, fort heir part, warn that the whole operation may not be worthwhile from a climate perspective.

“The industry is using hydrogen as a smokescreen to keep fossil fuels online for longer,” says Silvia Pastorelli, a clean energy campaigner at Greenpeace. “More investments in gas and gas infrastructure will only lock us into further emissions,” she says, warning that “gas is a fossil fuel just as much as coal and oil are” and therefore a major contributor to the climate emergency.

“With flimsy promises that the pipelines will eventually carry clean energy, they are securing investments for fossil fuels now. Governments must take us into the future with direct investments in renewables, not anchor us in the past with dead fossils,” she said.