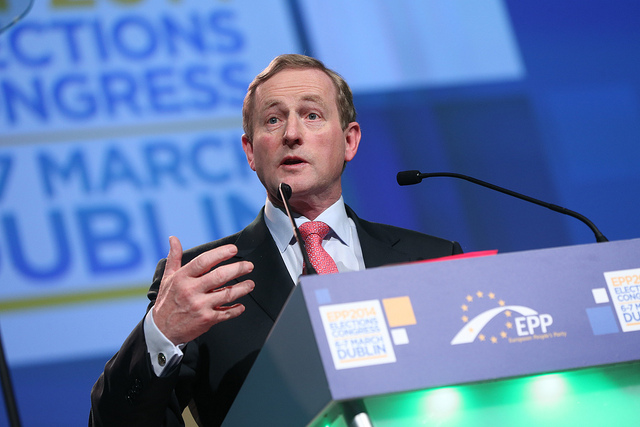 Enda Kenny speaking at an EPP event in Dublin. [EPP/Flickr]

ITRE ultimately backed an amendment earmarking €5 billion for efficiency by a single vote. South of Ireland representative Kelly had put his name to the clause, before withdrawing it after the call.

Both the Irish PM and Kelly are Fine Gael and members of the centre-right European People’s Party (EPP), the largest political group in the European Parliament.The EPP is against the ringfence, because it feels any major amendment would open the gates for a slew of further changes. That could slow the Juncker Plan’s progress onto the law books.

The Irish PM told Kelly that his position as leader of Fine Gael in the European Parliament meant that he could not go against the EPP, said Claude Turmes, the Green’s energy spokesman. Turmes, a senior MEP from Luxembourg, co-signed the ringfence amendment with Kelly.

Turmes said that the EPP was plotting to overturn the amendment by pressuring its MEPs and using “dirty procedural tricks”.

EURACTIV asked both Kenny and Kelly to comment on Friday (17 April). Neither had responded by this morning (20 April).

Even before Kenny’s intervention, EURACTIV understands that Kelly, appointed by the Taoisech as leader in August 2014, was under sustained pressure to change his position.

Today, the EPP and the Liberals (ALDE) in the European Parliament are expected to attempt to overturn the ringfence at a joint meeting of the Budget and Economic and Monetary Affairs committees.

That would be controversial as the two committees had signed over sole competence of article five of the European Fund for Strategic Investments (EFSI) to ITRE.

Under the terms of the agreement, the ringfence should have been carried into talks with the Council of Ministers and the European Commission to finalise the EFSI. A first such three-way meeting is scheduled for Wednesday (22 April).

EFSI is the legislation that will put the Juncker Plan into practice. The plan foresees €16 billion of EU money and €5 billion of European Investment Bank funds being used as investor risk guarantees, to unlock €315 billion public and private investment over the next three years.

Apart from Kelly and Turmes, two other MEPS had put their name to the amendment. They were Morten Helveg Pederson, a Danish Liberal, and Socialist Jeppe Kofod, also from Denmark.

The Chairman of the ITRE Committee is Jerzy Buzek, of the EPP. The former European Parliament President attended a meeting of committee chairs on Thursday.

That put Buzek in the invidious position of being torn between his party and the will of his committee, Turmes said.

The meeting was called after supporters of earmarking, including the lead MEP on the ITRE report, got wind of the planned vote to excise the ringfence from the bill. It broke up without reaching any resolution.

Rapporteur Kathleen Van Brempt, a Belgian Socialist, had told EURACTIV it would be a “tough battle” to save the efficiency fund after the ITRE vote. But she was forced to fight for its survival much earlier than she expected.

The EPP and ALDE are both opposed to the ringfence plan. The ALDE is opposed because it thought it would be too narrow and inflexible to spur investment.

The vote to earmark funds was welcomed by environmental campaigners such as Renovate Europe, Friends of the Earth Europe and E3G. They argue that energy efficiency projects boost energy security, and jobs and growth, and are quick to roll out.

Ireland in particular stood to gain from such projects, said Renovate Europe campaign director Adrian Joyce, because it has a high levels of unemployment in its construction sector.

Commission Vice-President Jyrki Katainen is in charge of the Juncker Plan. Like Commission President Jean-Claude Juncker, he is an EPP member. Katainen told EURACTIV in March that the private sector should determine which projects get finance, rather than any ringfencing.

Germany and France called for the creation of a sub-fund for efficiency projects as part of the Juncker Plan on 31 March.