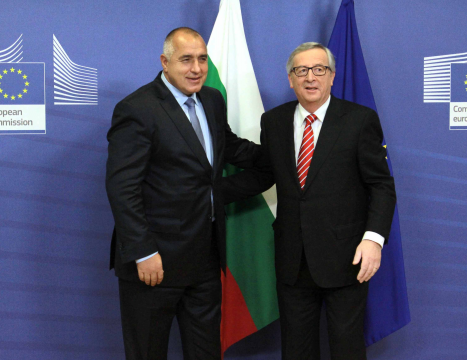 European Commission President Jean-Claude Juncker has insisted the €32 billion South Stream natural gas pipeline can still go ahead, and accused Russia of holding EU-member Bulgaria for ransom when it said it had abandoned the project.

He told reporters issues relating to the pipeline were not insurmountable and he was working with Bulgaria to address them.

Russia said on Monday (1 December) it had abandoned the pipeline, which would have bypassed Ukraine, Gazprom’s traditional transit route for Russian gas, citing EU competition requirements for a pipeline’s ownership to be divorced from its cargo. It said it was working on an alternative route via Turkey.

Juncker accused Moscow of blackmailing Bulgaria, which retains strong political and economic ties with Moscow and is almost entirely dependent on Russia for its gas.

“I am not accepting the simple easy idea that Bulgaria can be blackmailed as far as these energy relations are concerned,” Juncker said.

“We’ll take … all the necessary steps to make sure that our relations with Russia will be improved, but it doesn’t depend only on the willingness of the EU, of the European Commission. To dance a tango … you need two dancers.”

Borissov also said South Stream could be built and agreed it had to comply with EU rules, including legislation known as the third energy package, which limits how much of a pipeline a company can own if it also controls its contents.

Further efforts to bring the project in line will be made on Tuesday, when EU energy ministers meet for regular talks.

“I hope that all these technical details will be solved at this meeting including the third energy package,” Borisov said. He added he had not received any official notice from Russia that South Stream was not going ahead.

EU sources, speaking on condition of anonymity, said Russia’s calculation could have been that its announcement of South Stream’s demise would place the Commission under pressure from some member states to soften its regulatory stance.

At the same time, Russia has a struggle to find the cash for South Stream, given a falling oil price and economic sanctions.

Hungarian Prime Minister Viktor Orban accused Brussels on Friday of sabotaging the Russian-backed South Stream gas pipeline project, which was scrapped this week in a setback to his strategy of closer ties with the Kremlin.

Orban has tried to secure supplies of energy and trade for Hungary by doing deals with Moscow, but that drew criticism from Western governments which say he should not be cosying up to Russia when it has sent troops into Ukraine.

Moscow’s decision to cancel South Stream is a loss of face for Orban, his critics say, though not bad enough to threaten his grip on power.

“The EU has worked ceaselessly to undermine this programme,” Orban said in a radio interview.

Orban cast South Stream’s fate as part of a David-and-Goliath-style struggle between his country, a former Soviet satellite that joined the European Union in 2004, and the outside world. This resonates in Hungary, still aggrieved after it lost two-thirds of its territory following World War One.

Orban said Hungary was looking at other options for securing gas supplies, including possibly from Azerbaijan.

Russia’s announcement on Monday caught Orban’s government off guard. Officials contacted by Reuters a few hours afterwards said they had heard about it only from the media.

Bernadett Szel, a member of parliament from the small opposition LMP party, said the cancellation showed Orban was wrong to bet on ties with Russian President Vladimir Putin.

“Viktor Orban has done everything, sidelining all principles and rational considerations and shared interests with our allies, to form a good relationship with Putin,” Szel said. “But when his interests so dictated, Putin withdrew from this project in the blink of an eye.”