Andrej Zarevi? of BETA the EURACTIV partner agency in Serbia 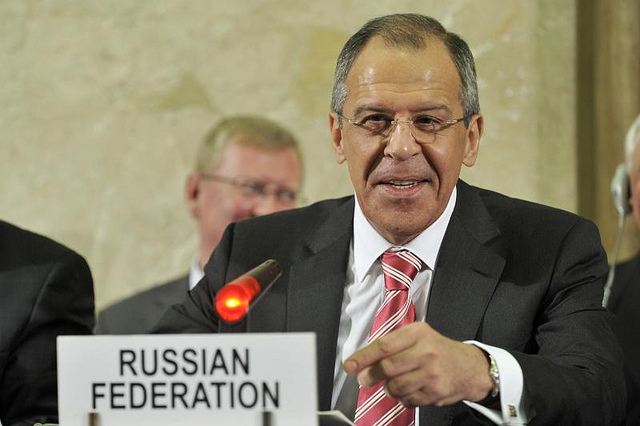 On a visit to Belgrade, Russian Foreign Minister Sergei Lavrov reiterated the position that his country “respects and supports” the European integration of Serbia, but warned against new dividing lines in Europe and pleaded for the Gazprom-favoured South Stream gas pipeline.

Lavrov’s hosts said Serbia, a candidate for EU membership, wanted to be a member of the Union, but that it would not sever its ties with Russia.

The Russian minister began his visit to Belgrade on 16 June by laying wreaths at the monument of liberators of Belgrade in WWII, which is dedicated both to the Yugoslav partisans and Red army soldiers who participated in liberation of Belgrade. He met with President Tomislav Nikoli?, Prime Minister Aleksandar Vu?i? and Foreign Minister Ivica Da?i? on 17 June.

At the press conference after the meeting with Da?i?, Lavrov stated that Moscow has “respect for the negotiations which Serbia is conducting in connection with association with the EU”, but that it was “absolutely unacceptable that new lines of separation are created in Europe.”

“We view with respect the negotiations which Serbia is conducting regarding association with the EU. Our starting point is that the creation of new lines of separation in Europe is absolutely unacceptable, and it is necessary that everyone in Europe lives in a common cultural, humanitarian and commercial space,” Lavrov said at a news conference after the talks with the Serbian foreign minister.

Da?i? stated after the meeting with Lavrov that, although it wishes to become a member of the EU, Serbia will not turn its back on Russia, adding that it is his understanding that this is not an “either-or” dilemma.

“Why would only Serbia be presented with an ‘either-or’ choice, when other European countries have the most developed economic relations with Russia,” the Serbian foreign minister questioned, apparently alluding at Germany or France.

The Serbian officials thanked Lavrov for Russia’s support on the issue of Kosovo, while the Russian minister reiterated his support for the dialogue that is being conducted in Brussels. Da?i? said that in the absence of support from Russia and other countries, “Serbia would nowadays be in a situation of almost complete defeat regarding Kosovo.”

Serbia and Russia, as well as EU members Greece, Cyprus, Romania, Spain and Slovakia, do not recognise Kosovo, a former Serbian province, as an independent state.

Lavrov estimated that relations between Serbia and Russia are characterized by “a dynamic political dialogue”.

The Russian minister said that Moscow supported the strengthening of the role of the Organisation for Security and Cooperation in Europe (OSCE) in solving the Ukraine crisis, but also stressed that Ukraine’s leadership is refusing support the “roadmap” proposed by the Swiss presidency of this organization.

The OSCE drew up a plan to help bring the pro-Western Ukrainian authorities and pro-Russian militants in the southeast to the negotiating table, but no progress has been made in several rounds of dialogue that excluded the armed separatists in the east.

Da?i? added that Serbia will invest maximum effort, as the future president of the OSCE next year, for the Ukraine crisis to be solved through dialogue, and estimated that this will represent a great challenge for his country.

Serbia supports the territorial integrity of Ukraine, but it does not wish to impose sanctions on Russia.

No change of plan for South Stream

After the talks with Serbian officials, Lavrov stated that Russia is counting on the South Stream gas pipeline being constructed as planned, despite the suspension of work in Bulgaria, which he said was “surely just temporary”.

“I have no doubt that this stoppage is temporary. South Stream is a unique systemic solution for supplying Southeast Europe with gas,” Lavrov stated.

Da?i? said that Russia is one of Serbia’s most important political partners besides Germany and Italy, and that all economic projects under way will be continued.

“It is the interest of Serbia for these economic projects to continue. Our national and state interest is that the South Stream is built, that the Serbian oil Industry is the best company in the region, that the program of reconstruction and revitalization of our railways is completed successfully. As well as a series of other new programs and investments,” Da?i? stated.

It was announced earlier that the construction of the Serbian segment of the South Stream gas pipeline could start in July. The project is implemented by the Russian gas export monopoly Gazprom, and the part of the project in Serbia will be realized by South Stream Serbia, jointly owned by Gazprom (51%) and Srbijagas (49%). The Serbian portion of the pipeline will be 422.4 kilometers long.

The majority owner of the Serbian oil industry is owned by Russian company Gazpromneft.

Russia approved an $800 million loan to Serbia, for the reconstruction of its railroad, with the Russian and Serbian railways being in charge of the projects, financed by this loan.

In December 2013, the European Commission said that all bilateral agreements (IGAs) for the construction of South Stream gas, signed between Russia and Bulgaria, Serbia, Hungary, Greece, Slovenia, Croatia and Austria, are all in breach of EU law and need to be renegotiated from scratch [read more].