None of the world’s major coal, oil and gas companies are on track to limit climate warming to 2°C by 2050, according to new research released on Wednesday (7 October).

While some oil and gas firms like Shell and BP have set out plans to go carbon neutral, none of the world’s 59 biggest fossil fuel companies have a long-term plan that would align their emissions with a 2°C climate goal by 2050, according to the research by the Transition Pathway Initiative (TPI).

“Investors have witnessed a flurry of significant climate announcements by fossil fuel majors this year, so it is striking this independent research still shows those commitments do not yet align with limiting climate change to 2°C,” said Adam Matthews, co-chair of the Transition Pathway Initiative.

TPI is a global initiative led by asset owners and supported by asset managers, which assesses companies’ preparedness for the transition to a low carbon economy. The authors of the report, based at the London School of Economics, assessed companies on their carbon performance and found only seven could meet emissions targets in line with the ‘Paris Pledges’ made in 2015.

The Paris Pledges, those consistent with emissions reductions pledged by countries as part of the Paris Agreement, only reduce emissions to 3.2°C warming, according to the UN Environment Programme, and are widely regarded as insufficient to prevent dangerous climate change.

The Paris Agreement has an overall aim to reduce global warming to 2°C, something none of the companies are on track to reach. 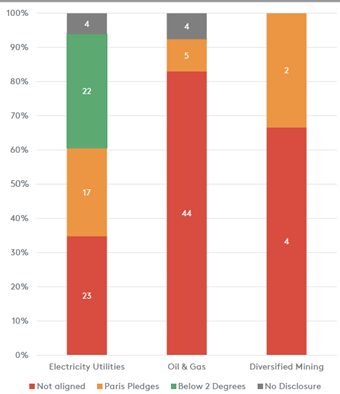 The different between electricity utilities and other energy providers is stark

Compared to this, many companies in the electric utility sector are aligned, with 39 meeting Paris Pledges and 22 meeting the more ambitious ‘below 2°C’ benchmark.

The report’s author, Professor Simon Dietz, said this difference comes from more regulation on the electricity sector and that the core business model is not under threat as technology for decarbonising electricity already exists.

He added: “For oil & gas companies, the route to Paris alignment is much more of a challenge to their basic reason for being. Some companies have started grappling with this challenge, but none have met it yet.”

The seven companies, five oil and gas and two coal, with emissions targets in line with the Paris Pledges are all European, showing the EU is still ahead of Chinese and American counterparts in the energy transition.

Matthews said there is yet to be “meaningful action” from American companies to reduce carbon emissions.

Notably, those companies which took the top five spots for highest levels of investment into renewables in a CDP study in 2018, are the closest to reaching the 2°C benchmark.

While no company has a pathway to meet the 2°C benchmark, Shell, Eni and Total are getting closer, but require additional measures to reach it.

A number of large energy companies have also made promises to reach net zero emissions, meaning they would be removing as many emissions as they produce, by 2050.

Earlier this year, the European Oil Refining Industry Association, whose members include Shell and Total, outlined a €650 billion plan to completely decarbonise transport fuels by 2050, saying “there will be no return to business as usual for the fuels industries” after the COVID-19 crisis.

This is partly prompted by moves in the automobile industry towards electric cars.

However, the TPI argues these statements may be more ambitious than their actual plans. 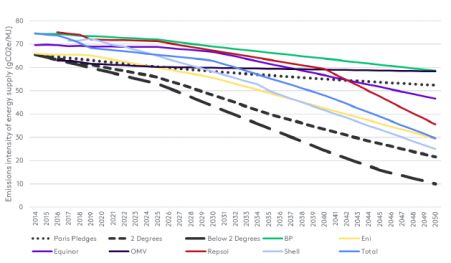