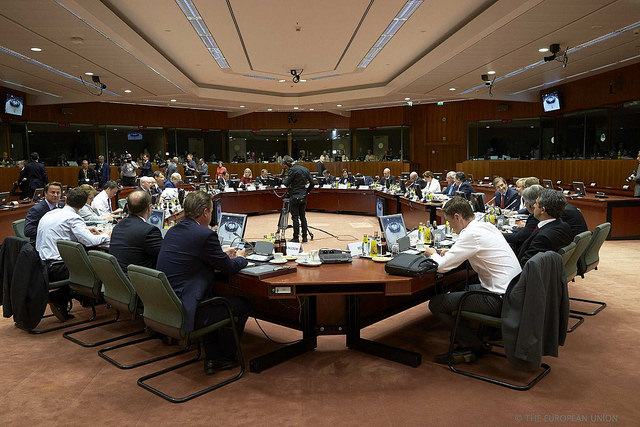 European Union climate and energy laws will be subject to an effective member state veto after tonight’s summit of EU leaders in Brussels.

Any European Commission legislation following agreement on the EU’s 2030 climate and energy framework will only be passed by a unanimous vote of all 28 member states, sources have revealed.

Decisions on Commission legislation, with a few exceptions such as EU-level tax law, are passed by a qualified majority vote (QMV). QMV allows laws to be passed in the face of opposition if enough member states, representing enough citizens, back a bill.

Unanimity will hand any member state an effective veto over new EU climate and energy law. It could also rob the European Parliament of any significant influence over legislation.

Most EU legislation is now subject to co-decision by the Council and Parliament, but a unanimous vote could render talks between the institutions meaningless.

Ambassadors meeting last night to thrash out a deal on the EU’s proposed 2030 climate and energy framework added the clause in the latest draft summit conclusions.

EU leaders hope to finalise those conclusions at today’s summit in Brussels. They will feed into next year’s negotiations to reach a global legally binding greenhouse gas emissions reduction target.

Diplomats will meet again at 2pm today to continue talks in parallel with the summit, and ahead of the working dinner of heads of state and government planned for about 8pm. The 2030 package is on the agenda for debate at the dinner. The situation is fluid and the veto could be removed.

The EU’s proposed climate and energy framework calls for a legally-binding 40% reduction of greenhouse gas emissions, a 30% improvement in energy efficiency, and raising the share of renewables to at least 27% of the EU’s energy mix.

The latest text waters down the 30% energy efficiency target proposed by the EU to a non-binding 27%, sources confirmed.

There will be no national level binding targets for efficiency or renewables. That will be replaced by an EU level target. In the case of efficiency the EU level is non-binding.

The renewables target will be binding but only at EU-level, according to sources.

The latest negotiating document makes no mention of a proposed 15% electricity interconnectors target. As EURACTIV reported today, that target was ditched because of a row between Spain, Portugal and France.

Claude Turmes, a Green MEP and the rapporteur on the EU’s 2009 renewable energy directive, said, “The utmost concession has been given to UK and Poland by extending the Council’s veto right and thereby clearly sidelining the new Juncker Commission and the European Parliament.

“Future climate legislation on renewables, efficiency or the Emissions Trading System has been put at risk. The Energy Union has died before being born.”